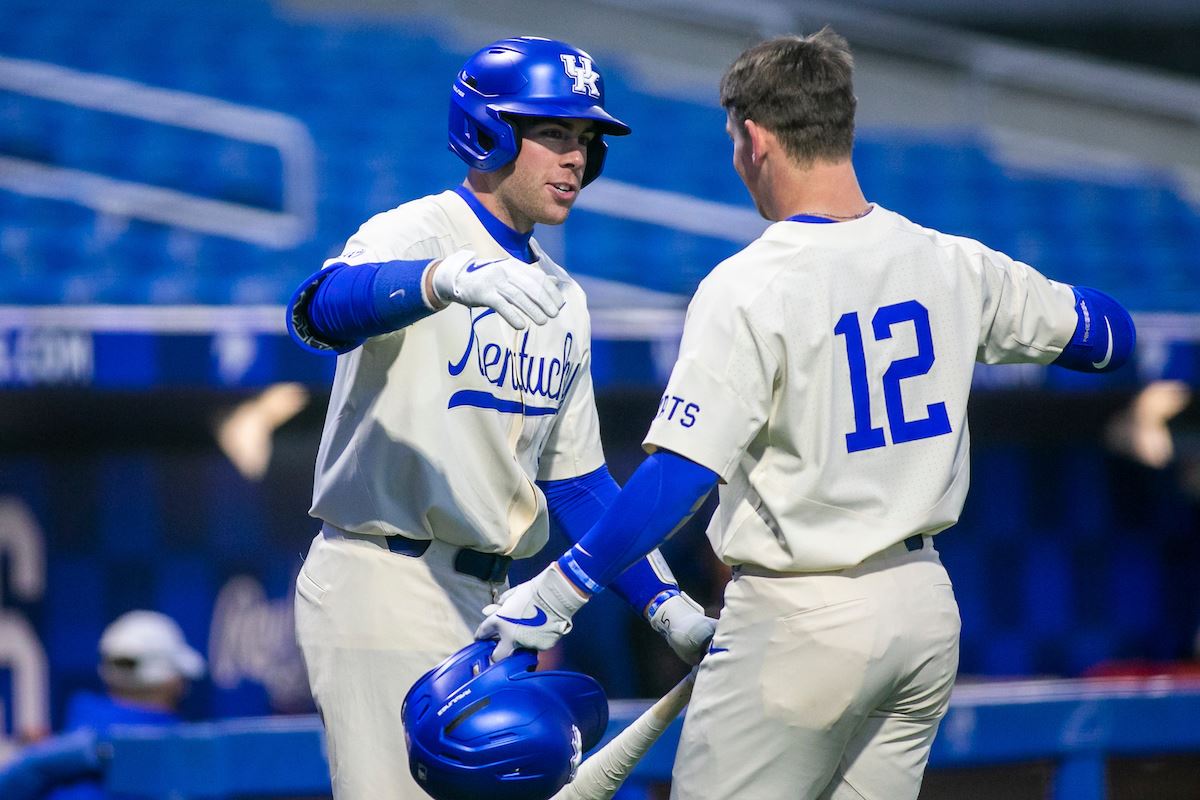 The Kentucky baseball team is getting good at this walk-off win thing.

For the second time in as many games, the Wildcats rushed the field after scoring the winning run its final at-bat, albeit in an unconventional way in Tuesday’s wet 13-3, seven-inning victory over Tennessee Tech. The game was called as a 10-run rule that the teams agreed upon before the contest.

Zeke Lewis capped a six-run seventh inning with a three-run double to left field, sending the dugout streaming onto the field as Chase Estep slid safely across the plate. It was the Wildcats’ 27th consecutive win over non-Power Five conference opponents, the longest such current streak in the Southeastern Conference.

Estep, a freshman from Corbin, Kentucky, had a breakout game despite not being in the starting lineup. He drilled the first home run of his collegiate career in the sixth inning, a no-doubt line drive into the right field bullpen, before drawing a walk and racing home from first with the winning run.

The Cats (5-3) also received big nights from John Rhodes and Austin Schultz, who continued his torrid stretch at the plate. Schultz had three hits, scored a career-high three runs, stole a pair of bases and drove in two runs to give him 11 RBI in the past five games. Rhodes, another talented freshman, had a career-high three hits and knocked in a pair of runs.

On the mound, freshman Cole Stupp earned the win in his first career start while striking out seven in 4.0 innings, allowing just two earned runs. The Georgia native struck out five straight hitters and recorded seven of the first nine outs via strikes while flashing a strong arsenal of pitches against a hot-hitting club. Redshirt freshman Will Gambino earned the first save of his career after entering the game with two on, no outs and a three-run lead in the sixth inning and retiring all six batters he faced.

Top 1st – Brett Roberts doubled to LCF and scored on Gavin Johns’ single through the left side. TTU 1, UK 0.

Top 4th – Cody Littlejohn doubled inside the 1B bag and scored on Steffensen’s single through the right side of the infield. UK 6, TTU 3.

Bottom 7th – Schultz reached on an infield single, advanced to second on a throwing error and third on Anu’s groundout. Rhodes reached on a fielder’s choice. Daniel walked to load the bases. Coltyn Kessler walked to force in a run. Golda singled to LF, scoring Rhodes and Daniel. Estep walked to load the bases. Zeke Lewis doubled down the LF line, scoring Kessler, Golda and Estep to end the game. UK 13, TTU 3.

The Cats host Eastern Kentucky on Wednesday, Feb. 26 at 1 p.m. ET. The game will be aired on SECN+. The radio call will be on the UK Sports Network.