FIRST-PERSON: Fond memories as a young fan watching Joe B. Hall on sidelines 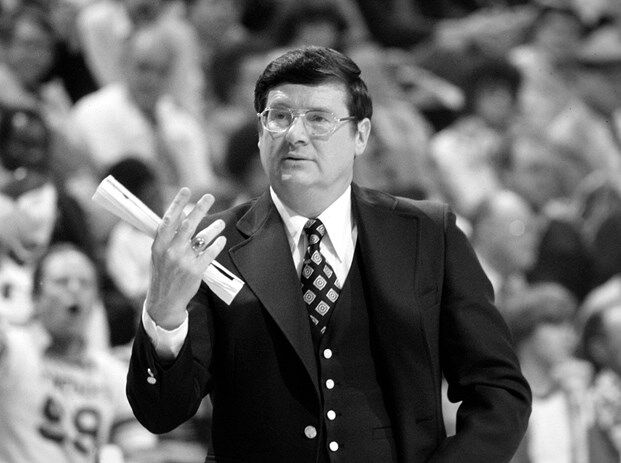 Sitting here in my press seat on a cold January day, the 15th of 2022, my mind races back to my childhood, flooding with memories of Joe B. Hall.

Like all of you, I was saddened by the passing of the longtime Kentucky basketball coach who died early Saturday morning at the age of 93 after suffering from health conditions for nearly two years.

No, I didn’t have the privilege of attending games at Rupp Arena when Joe B. was on the sidelines, but rather watched games on television and sometimes listened to them on the radio in rural Madison County. I can still see coach Hall roaming the sidelines with a rolled-up program in his hands and coaching mostly from his seat on the bench.

Back then, we just had four stations, five on a clear night. Some of the games were on tape delay and my dad and I would watch the Wildcats on replay, even on a school night. Some road games weren’t televised, and I listened to those games on the radio.

I practiced basketball on my gravel driveway and imagined playing for the Wildcats and coach Hall. You, know the 5-4-3-2-1 game-winning shot drill that you practiced on your own in the driveway? I always hated when March rolled around because that meant no more Kentucky basketball until the following season.

During one of those off-season years, in 1980 I believe, I remember coach Hall and the Wildcats made a visit to Richmond to support the “Meals on Wheels” program. I got his autograph and had my picture taken with Fred Cowan. That was a treat and I still have the book of autographs from the team’s visit that day and it’s among my treasured keepsakes. I wish I could say I remember the 1978 team, but I was just 6 at the time.

Long after he retired in 1985, Hall remained close to the program, especially during the past two decades. Current coach John Calipari welcomed Hall to practice sessions and games with open arms. His presence also allowed members of the media, including myself, to get to know him more as a person than the coach with a rolled-up program in his hands.

I have written a few stories about Hall’s teams and he was always gracious when interviewed. When I met him in the media room — pre-COVID — we always spoke and I asked how he was doing and he always responded.

That meant a lot to a kid raised in “Bucket Town” and “Round Hill.”

On this day, the Wildcats are playing Tennessee, a team that has played and defeated the Wildcats 75 times — more than any other team in college basketball history. Hall had his share against Ray Mears and Don DeVoe and won a lot of those games, especially in Lexington.

Hall claimed many wins as a coach but claimed his biggest victory Saturday when he crossed over center court and shook hands with The Master.