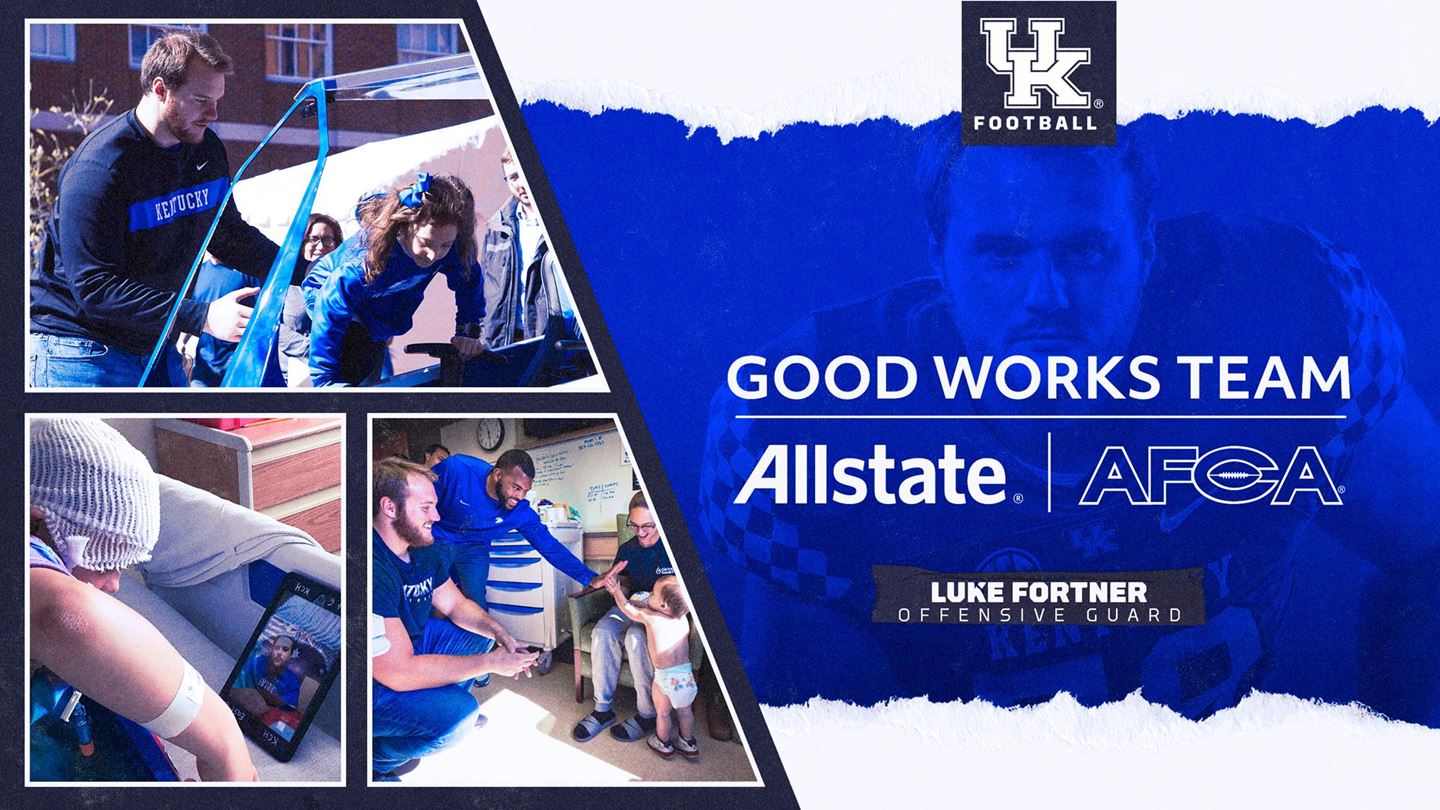 Senior offensive guard is one of 11 FBS players named to the prestigious team, the second straight from UK

For the second straight season, the University of Kentucky football team has a representative on the Allstate American Football Coaches Association (AFCA) Good Works Team as senior offensive guard Luke Fortner has received the honor. Fortner is one of only 22 players named to the prestigious team made up of college football players who step up to help those in need.  Last year, fellow “Big Blue Wall” member Landon Young was named to the team and was voted team captain in a fan vote.

·       Volunteer at Urban Impact at the Woodhill Community Center, an organization that strives to enable youth to grow, succeed and lead

·       Volunteer for Read Across America at Fayette County public schools

·       Volunteered with Habitat for Humanity

Vote Fortner for the Captain

At ESPN.com/Allstate, fans can vote for the 2020 Allstate AFCA Good Works Team captain once a day now through Nov. 22.

“This year has brought new meaning and purpose to the Allstate AFCA Good Works Team, and this group of 22 players has risen to these challenges to give back to their communities in tremendous ways,” AFCA Executive Director Todd Berry said. “I am very proud of everything this honor represents for student-athletes and coaches and look forward to showcasing their incredible stories throughout the season.”

Throughout the season, fans can join the conversation using #GoodWorksTeam on their social media channels to learn more about these players and their stories.

The Allstate AFCA Good Works Team was established in 1992 by the College Football Association to recognize extra efforts by players and student support staff off the field. AFCA became the governing body of the award in 1997 and continues to honor players who go the extra mile for those in need. Allstate became the presenting sponsor starting with the 2008 season.

Since the recognition program began, the SEC leads all conferences with 76 athletes, followed by the Atlantic Coast Conference with 46, and the Big 12 Conference with 38. Georgia is in first place with 20 honorees, followed by Kentucky with 16. Super Bowl XLII, XLVI and XLI champion quarterbacks Eli and Peyton Manning were members of the 2002 and 1997 Allstate AFCA Good Works Teams, respectively.