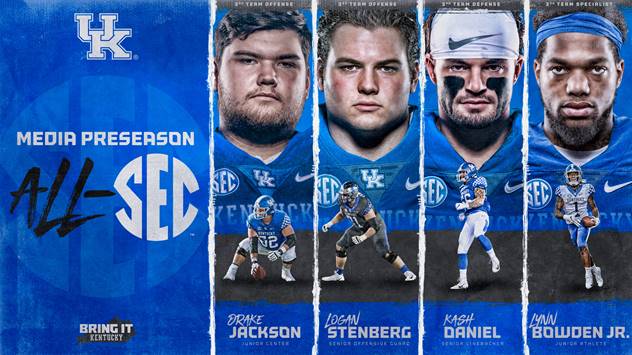 Jackson, a native of Versailles, Kentucky, started at center in all 13 games last season, giving him 20 consecutive starts. He was responsible for only one-half quarterback sack, had 141 blocks at the point of attack, and had 33 knockdown blocks. He was a significant contributor in helping running back Benny Snell Jr. become UK’s all-time leading rusher.

Stenberg, who hails from Madison, Alabama, has played in 38 career games, starting the last 26. He was named a preseason Second-Team All-American by the Sporting News after grading out at 85.5 percent in 2018, registering 78 knockdown blocks and 154 blocks at the point of attack. He did not miss a single assignment all season and allowed just one sack.

Daniel, from Paintsville, Kentucky, is UK’s leading returning tackler from last season. He ranked third on the team in total tackles (84), behind seniors Josh Allen and Darius West. He also ranked third in tackles for loss (7.5) and was tied for 24th in the SEC in tackles per game (6.3). He accomplished all of this despite playing with a broken left hand sustained against Vanderbilt on Oct. 20.

Bowden, a native of Youngstown, Ohio, was a second-team All-SEC All-Purpose performer last season by the coaches and Athlon Sports after totaling two punt returns for TDs on just five total returns, a 58-yard punt return for a TD in the first quarter vs. Penn State and 67-yarder at Missouri. He was one of just three players nationally with two punt returns for a TD. He also returned 25 kickoffs for an average of 21.6 yards per return.

As a receiver, Bowden broke the school record for most receptions (67) by a sophomore in school history, surpassing Derek Abney’s 66 from 2001. He led the Wildcats in catches, receiving yards (745) and touchdown receptions (five) and hauled in the most catches in a season since current NFL star Randall Cobb caught 84 passes in 2010.

The junior recently was named to the Biletnikoff Award Watch List for the nation’s top receiver, Athlon Sports’ Preseason All-SEC Second Team as a receiver and Third Team as a return specialist.

Bowden enters 2019 needing just 45 receiving yards to become the 30th player in school history to reach 1,000 for their career. With 16 more receptions he would become the 17th UK player to have 100 career catches.