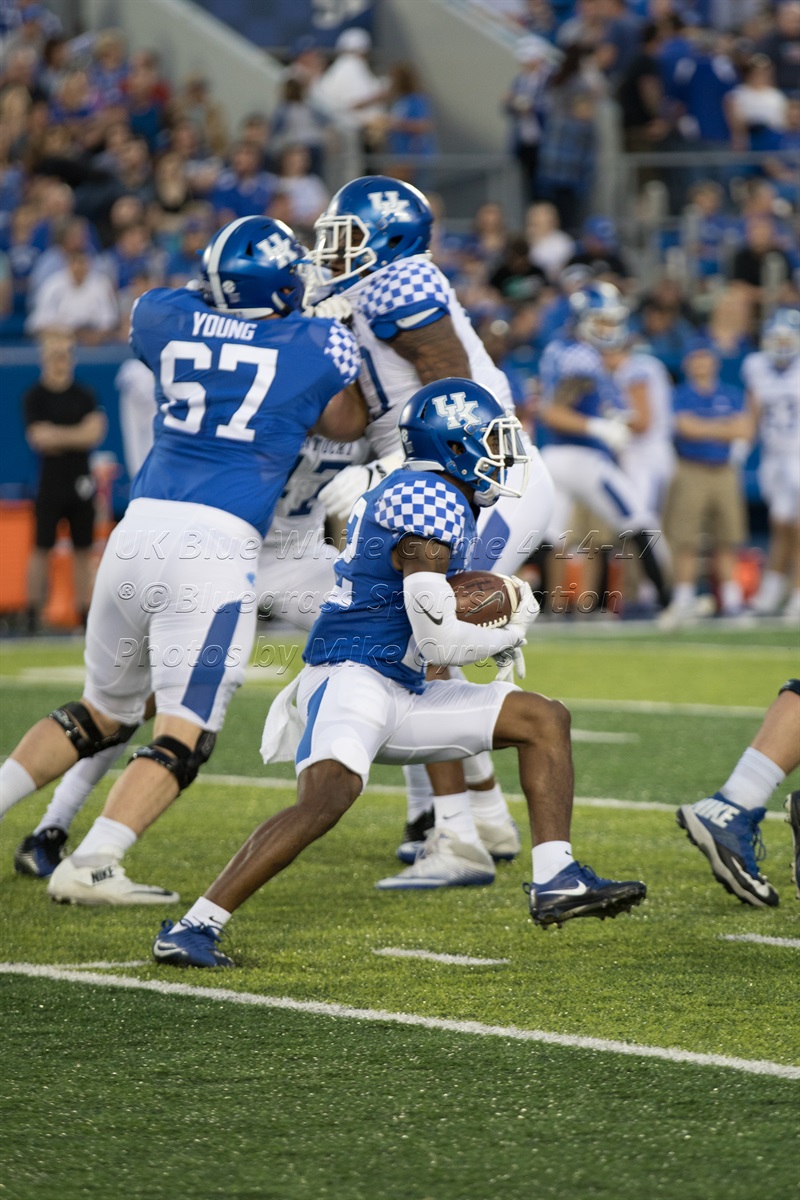 Curiosity won’t kill these Cats, but expectations just might. In one of the most highly anticipated seasons in UK Football history, hopes are already running rampant across the Bluegrass State. Last year’s on-the-field successes together with another Mark Stoops/Vince Marrow recruiting bonanza have combined for an upcoming perfect storm of a triumphant gridiron campaign.

Heading into this year’s Spring Game, some long-time stalwarts familiar with Kentucky’s program feel that this could be one of the most exciting years ever. I’ve heard some well-respected UK scribes talking about potentially nine wins as the Wildcats battle for that elusive SEC eastern division crown. Crazy as it might seem, it’s hard to believe that just over four months earlier the Cats were a Lamar Jackson fumble away from another mediocre year. But alas, the Heisman winner put the ball on the ground, UK drove down the field for the winning field goal and the rest is history.

Is there too much hype this year? Is the team overconfident? Coach Mark Stoops in his first official press conference at the beginning of Spring practice said this about balancing confidence with humility after kicking down some doors last year. “Yeah, I don’t think that’ll be an issue with our staff and the way we approach things. That’s just the way we go about our business. You know, we’ve got a lot to do, and I think our players recognize that and want to accomplish a lot more, and so we are a hungry football team, and we’ll stay that very, very humbled and very hungry.”

Offensive Coordinator Eddie Gran was a bit less guarded after watching his team’s performance in a recent scrimmage earlier in the week. “I think they’re drinking some Kool-Aid,” he said. “And it’s bad Kool-Aid, and I’ve got to get them to quit drinking.” Bad Kool-Aid can often be fueled by unrealistic expectations, media hype, and player overconfidence—all three crouching at prosperity’s door just waiting to pounce on a team thirsty for consistent success.

With that as the backdrop, the annual Blue-White Football game was appropriately held on Good Friday this year. The event marks the death of another Spring practice in preparation for the resurrection of the upcoming regular season. The old (Boom Williams and Jeff Badet) have gone, the new (Lynn Bowden and JaVonte Richardson) are coming. BBN stands poised for that long-awaited savior in a breakout football season.

It’s often difficult to glean anything remotely significant from these intra-squad scrimmages. Is good offense due to bad defense or vice versa? Coaches aren’t willing to show their hands in these early exhibitions. Add on the fact that you don’t want anyone to get hurt in these scrimmages and you wonder how anyone can gain any useful insights about the team.

Having said that, an announced attendance of 37,172 (tickets distributed) showed up on a beautiful spring evening to witness the Blues defeat the Whites 31-14. From my perspective, I thought Gunnar Hoak looked really good (can you say quarterback controversy?), as did linebackers Boogie Watson and Jamin Davis. Sihiem King had a solid game at running back. Overall team depth looks promising but the explosiveness of Boom and Badet will be sorely missed. I’ll save you the hassle by saying that post-game interviews yielded minimal new information. It’s the Spring game, so don’t be fooled—there was nothing to report.

Many agree that the defensive line remains the biggest question mark on this year’s team. Overall success or failure could ultimately be predicated on the improvement and performance of guys like Adrian Middleton, Matt Elam, and Denzil Ware. Senior nose guard Naquez Pringle was asked how his position group felt about being universally targeted during the off season. “It’s motivation every day,” said the South Carolina native. “People are writing sometimes that we have to be strong up front. It’s our job to stop the run. So that’s what we’re going to do—stop the run. This is what we’ve been working on all Spring, stopping the run then. Hopefully we show up.”

Hopefully, the whole team shows up. Last year after the Spring game, I predicted the Cats–with a couple of breaks here and there–would go 7-5. With another year under their belts and with an even more favorable schedule, Kentucky should once again win a minimum of 7 games. Eight wins could be even more likely and nine victories still lie within the realm of possibility—unless unrealistic expectations intercede and somehow ruin the party. We’ll find out come September. We certainly didn’t find out tonight.