Hamlin’s Photo Finish Punches Ticket to Round of 8 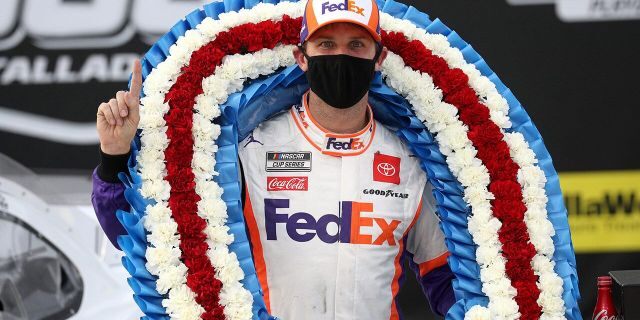 Denny Hamlin wins a thriller at Talladega, drag racing to the checkers, collecting his seventh victory of the 2020 NASCAR Cup Season. Hamlin punches his ticket into the Round of 8 of the playoffs regardless of his performance at the Charlotte Roval next weekend.  It’s also marks the 44th win of his career tying him with Legendary Awesome Bill Elliott.

The NASCAR Cup Series round of 12 playoff race invaded Talladega Superspeedway for the YELLAWOODS 500.  The event was scheduled for 94 laps spread over three stages and became official after Lap 47. The distance of the race was 500 miles.

Fifteen thousand race spectators under CDC rules/ regulation were allowed attendance to the Race and showcased to 13 caution-flag event, surpassing a previous caution record of 11.

Brad Keselowski had odds to shine at Talladega, checking off five wins in 23 races. No other active NASCAR Cup Series drivers has more than three Cup victories at “Dega”.

YELLAWOODS 500 – Stage 1 recap:
Chris Buescher captured the Stage 1 win under caution when a multi-car wreck erupted at the front of the field with two laps to go.

Hamlin, who started on the pole, got off to a quick start but in Turn 3, Christopher Bell appeared to blow a tire and hit Reddick to bring out a caution. Both cars appeared to suffer significant damage.

Most of the lead-lap cars remained on track and Hamlin continued to lead the way on the restart on Lap 5.

A handful of cars pitted but most stayed out and Hamlin again led the field on the restart on Lap 13.

The caution quickly came back out on restart lap when Corey LaJoie’s No. 32 car stalled on the track in Turn 1 and could not get restarted.

The race returned to green on Lap 16 with Hamlin still in command.

Logano edged around Hamlin on the high side coming off Turn 4 on Lap 17 to take the lead for the first time.

Hamlin changed lanes and got in front of Logano to reclaim the lead on Lap 19.

On Lap 26, NASCAR displayed a competition caution to allow teams to check on tire wear. All the lead-lap cars pitted with Almirola the first off pit road. Elliott was penalized for speeding on pit road during his stop and had to restart from the rear of the field.

On the restart on Lap 31, Almirola was followed by Logano and Clint Bowyer.

Blaney hammered around Almirola to take the lead for the first time on Lap 34. Jones moved into the top spot on Lap 36 with Blaney reclaiming it on Lap 37.

Jones, with a push from Truex, moved out front again on Lap 38.

On Lap 42, Blaney reclaimed the lead with some help from Suarez. On Lap 50, Blaney’s teammate, Logano, dropped in front of him to take over the top spot.

With help from Kyle Busch, Jones got a push to the lead on Lap 51.

Elliott, with a push from Wallace, grabbed the lead on Lap 52.

With five laps remaining in the stage, Almirola had moved into the lead again followed by Keselowski and Buescher.

A chain reaction incident at the front of the field exiting Turn 4 on Lap 58 collected several playoff drivers including Almirola, who was leading at the time.  Alex Bowman and  Ryan Blaney were also involved suffered significant damage.

Buescher took the Stage 1 win under caution when a multi-car wreck erupted at the front of the field with two laps to go.

Majority of the Stage 2 lead lap contenders observed pit services while Chase Elliott acquired the lead when the race returned to green on Lap 66.   Short lived as Brad Keselowski drove into Turn 4 to take over the lead.

On Lap 67, Kyle Busch’s No. 18 Toyota, hampered by a tire rub from earlier race track collision, elected to utilize pit attention.  Many contenders stayed on the track as Kyle Busch chances of stage points/win diminished while on pit road.

Buescher remained out front when the race returned to green on Lap 74.

A bump from an Elliott’s bumper bolted Erik Jones to the lead the field on Lap 82.

On Lap 86, a large group of Chevrolet drivers, led by Elliott, made their green-flag pit stop for new tires and fuel to make it to the end of the stage.

Debris caution on Lap 87 brought out by a Ryan Blaney’s track incident, allowed most of the lead-lap cars to pit.  Elliott capitalized on earlier pit stop and circulated to the lead.

Entering the tri-oval on Lap 109, Bowyer drove into Jimmie Johnson, who then turned into Kurt Busch, sailing Kurt airborne, as No. 41 slid underneath Kurt Bush’s Chevrolet while airborne.  The race was pronounced a red flag condition lasting 11 minutes for track/ debris clean up.

Green Flag on Lap 114 has Elliott still pacing the pack as William Byron and Joey Logano follow in toe. Logano teamed with Matt DiBenedetto’s front bumper allowing Logano the opportunity to lead by Turn 4 after the restart.

Tyler Reddick hooked up with Truex Jr. on Lap 117 and bump-draft Martin into the lead.

Buescher was third, Elliott fourth and Nemechek rounded out the top-five.

Stages 2 and 3  Pit Service break displayed a handful of drivers pitting but Martin Truex Jr. opted to stay on the track. Truex Jr. resume the lead after the restart on Lap 126.  Not long after, Brad Keselowski made his appearance known, charging past Truex Jr. for the lead shortly after the restart.

Bubba Wallace grabbed the lead on Lap 129 coming off Turn 4 and before entering the tri-oval. On Lap 136 Wallace relinquished the lead back to Brad Keselowski and a crew of Fords paced to the front.  Teammate Joey Logano would eventually pass Keselowski, one lap later to control the post.

Debris spotted from the No. 48 of Jimmie Johnson on Lap 149 brought out the caution flag.  Every lead-lap car pitted for final pit service, Logano’s expedited pit secured Joey first off pit road. Concerned of possible overtime lap, Chase Elliott, Denny Hamlin and Matt DiBenedetto all pitted twice to top off with fuel for added mileage insurance.

Joey Logano led the field to green on Lap 153 restart, followed by Kevin Harvick, Erik Jones, William Byron and Matt Kenseth.  William Byron received a bump draft from Ryan Preece on the following Lap, changing the leader board.  Logano returned back the lead from Byron on Lap 155.

Lap 161, Chase Elliott drove to the front, only to be overtaken by Bubba Wallace along with a little assistance from Truex Jr.’s bumper’s horn.  Penske stable worked together on Lap 164 to push Logano around Wallace to work his way back to the front.

With 21 laps remaining, Elliott benefited from a bump-draft from Byron and returns back to the lead,

On Lap 180, Keselowski drafting partners hung Brad out to dry while Wallace reassumed the point.

Wallace bounced off the outside safer barrier wall, initiated by Preece with six laps to go. Coinciding on Turn 4, James Davidson collision brought out the caution flag.

The 1st Overtime green flag restart welcomed Logano back to the lead followed by DiBenedetto, Keselowski, Harvick and Preece, respectfully.

Chase Elliott piloted his Camaro to the front only to be troubled by a multi-car accident in the tri-oval which collected Harvick, Logano, Kyle Busch and Truex resulting into 2nd overtime.

At the start of the 2nd overtime, Elliott controled the front, followed by DiBenedetto, Preece, John Hunter Nemechek, Buescher and Hamlin.

Preece collided into Wallace triggering another multi-car wreck, sending the race into a 3rd overtime.

Exiting Turn 4 of the 3rd overtime restart, Matt DiBenedetto made his Camaro wide, blocking any advancement of competitors.  Action was brewing on the final Overtime as all bets and agreements are gone and it’s every man for himself.

Final Overtime (3rd) Green/White/Checkers flag flies over the track as Buescher drifted down onto Hamlin, forced Denny below the double yellow line.

Hamlin reencountered by driving up the apron resulting in a three-wide battle involving DiBenedetto and Ty Dillon for a drag race to the finish. Hamlin’s apron momentum sealed the victory in a thrilling photo-finish win over DiBenedetto.

DiBenedetto was penalized and forfeited a second place finish for forcing William Byron below the yellow line on the final lap and reprimanded a disappointing 21st place after penalty issued.

Erik Jones was credited with a second place finish followed by Ty Dillon, William Byron and Ryan Neman rounds out the top five.

Heartbreaker for Playoff Competitors: Clint Bowyer, Kyle Busch and Aric Almirola whom failed to finish the race, tightening up playoff ranking. These drivers essentially need to win or finish in the top tier at the Charlotte’s Roval next weekend to be in the hunt.  Kurt Busch who additionally received race ending damage was playing on house money, as the elder previously clinched a seat in the Round of 8 Playoff advancement.

YELLAWOODS 500  –  Finishing order among playoff drivers for NASCAR at Talladega