Harvick Tames the Lady in Black to Kickoff Playoffs 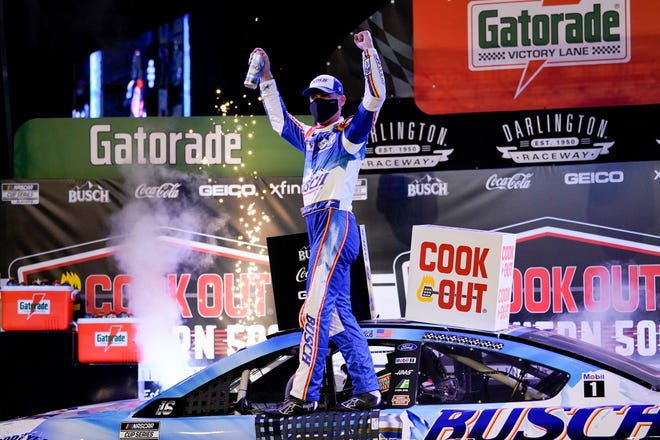 Denny Hamlin patiently drove his way to the front midway through Stage 1 as Chase slipped backward.

Truex Jr.’s expedited pit service bolted his JG Racing Toyota out of pits in the lead.  Martin Truex Jr. capitalized on the service and captured the Stage 1 checkers.

The late-summer South Carolina heat produced a slick race track as the day turned into night and the temperatures began to play a handling factor. Mid-Race adjustments must be utilized to contend with changing track conditions.

Martin Truex Jr. proved convincingly that he is the driver to contend by controlling Stage 2.

Cream rises to the top as Martin Truex Jr. regained the lead as the Stage contenders shrunk in his rear view mirror.  Truex Jr. swept both Stages in a dominating form.

Lap 245 brought out a John Hunter Nemecheck caution allowing playoff contender Matt DiBenedetto a free pass back on the lead lap.  This put all playoff players will be on the lead lap to battle for the win and playoff advancement.

With only 100 circuits remaining,  Joe Gibbs racing drivers:  Martin Truex Jr., Kyle Busch and Denny Hamlin made up the top three spots, respectfully.  Truex Jr. continued to hold a 3 second advantage over Kyle Busch in second. Debris on the track on lap 46 brought out the 7th caution of the day on brought in most drivers for final service.

Elliott would bring the field to green as Truex Jr. and Harvick advance.

Martin Truex Jr. catches Chase Elliott as both tangle for position, smacking the fence collecting their Darlington stripe.  These two dominant cars would eliminate their chances of victory as Kevin Harvick and Austin Dillon drive to the front.

Kevin Harvick hit his preferred lines and pulled away 10 car length lead over second place Austin Dillion with 3 laps to go.  Dillon would not go down quietly as he noticed Harvick missing his marks through the final turns. Harvick’s cushion was enough to hold off a charging Dillon battling for the win.

Chase Elliott finished 20th, while Martin Truex Jr. cut a tire from their collision and dropped to 22nd.