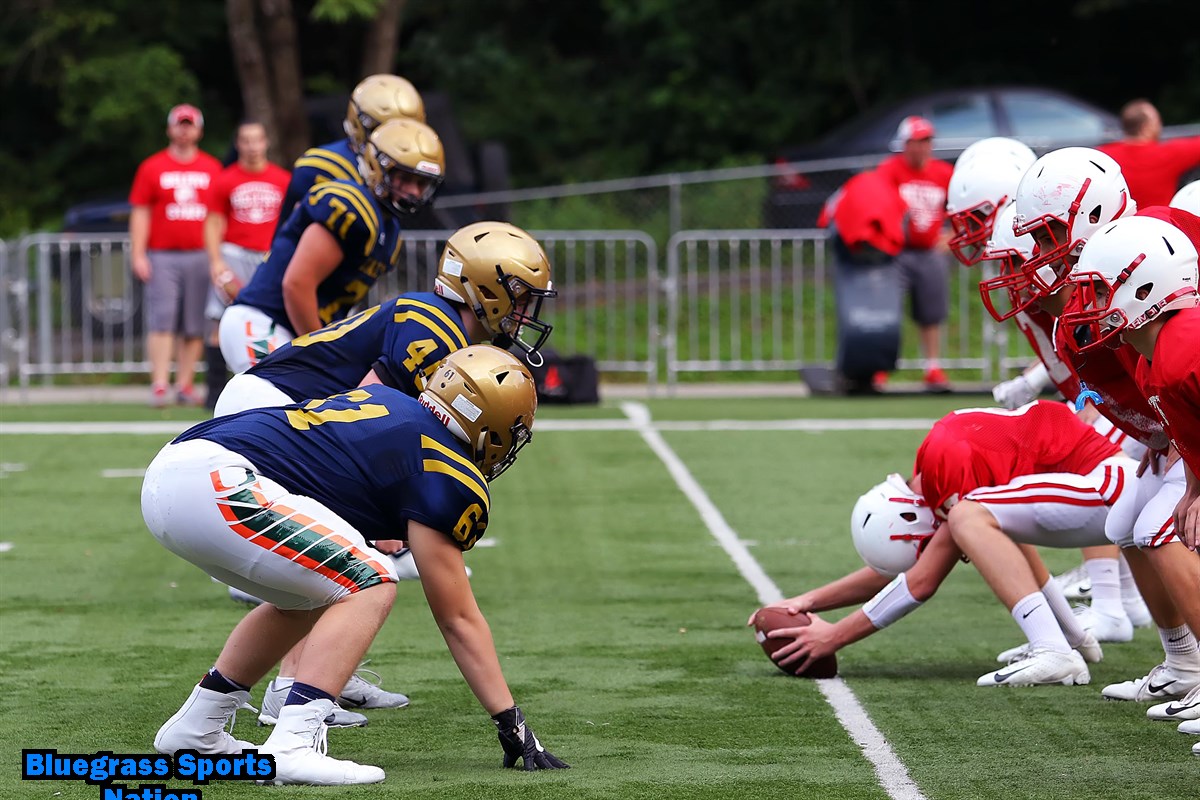 (Article by BSN Contributor JJ Baker)
Hazard, KY. 8-17-18 – With what has become an annual tradition, the Belfry Pirates and the Hazard Bulldogs squared off Friday night in each teams last pre-season scrimmage at Hazard’s Daniel Field. The Pirates came to the contest after a first week scrimmage of Richlands (VA) that saw them lose their quarterback after only twelve plays and have some growing pains with some new role players. After a refocus in practice the Pirates were looking to shore up assignments and responsibilities before the season starts next week against perennial Power Huntington High and the # 2 offensive tackle in the nation and # 9 over all 5 Star player (according to 247 sports) in Darnell Wright.

The Bulldogs planned to use the contest to prepare for last years 5A east Semi-finalist the Harlan County Black Bears in a week one matchup. Over the off season the Black Bears have installed a similar option offense to the Pirates and Coach Dixon and staff were looking to see what techniques and adjustments they could make to be more prepared for Harlan County.

The scrimmage started very deliberate with each team working their punt teams, extra point, and field goal teams against live pressure. A stand out for the Bulldogs special teams is a rotation of two new kickers in Nick Combs and Jonah Helm. Both new additions consistently hit extra points and were very accurate out to around the 35 yard mark with ample leg to possible reach out to 45-50 yards.

The offense and defense section of the scrimmage started with each team having a series of 10 plays of offense and 10 plays of defense. Belfry looked very good on both sides of the ball. They were big, strong, and physical with open field speed that was surprising. The Bulldogs were forced to play assignment football and when an assignment was missed Belfry, in true Belfry fashion, would make the Dogs pay.

Offensively, Hazard struggled with an athletic defensive line and a swarming line backer core and secondary during the 10 and 10 series but righted the ship during the down and distance portion of the scrimmage going toe to toe with Belfry with each finding the end zone twice. Senior quarterback Bailey Blair who stood out last year with 707 yards rushing and 1953 yards passing, was tested against what will probably be one of, if not the best, defenses the Bulldogs will face this season. Other offensive weapons for Hazard included senior LB/RB/ WR Skylar Pelfrey who gave a spark in the run game with hard nosed, athletic runs and open field speed and Senior DB/RB/WR Andy Baker that was a back that got to run lanes fast and made defenders miss in the open field, and Junior big man Mason Collins (LB/TE). Collins is a huge target in short yardage passing situations with great hands over the middle of the field. Sidelined with injuries this game were two other upperclassman standouts, who will be a major factor and give both opposing offenses and defenses fits later in the year, in senior Isaiah Stupart (DB/WR) and junior Reece Fletcher (LB/RB). Underclassman who did well in the contest, and to keep an eye on this year, include Tyson Turner (WR/DB), Kenton Beverly (OL/LB).

Hazard returned several starters on the offensive and defensive line in what should be one of their strong suits by the end of the regular season. They were led by senior center Kenzie Caudill and flanked by junior Matthew Couch and Freshman Kenton Beverly at the guard spots. Tackles for Hazard included senior Draven Goins and junior Dalton Strong. The defensive side of the big men saw a constant rotation of players that include senior Ben Adams, who is coming over from the offensive side of the ball last year, senior anchor at nose guard Jacob Brashear (who is back after a season ending injury in week 10 last season), and Parker Holbrook. Others that were in the rotation on the defensive line side of the ball were Draven Goins, Dalton Strong, and Nate Smith.

Defensively there were several players that stood out like LB Mason Collins and Reece Fletcher at MLB. Getting some quality reps there also was freshman’s Brayden “Hootie” Thomas and Kenton Beverly. At outside linebacker returner Skylar Pelfrey anchored one side and a rotation of several new faces like Ryan Dean (FR), Zane Deaton (FR), and Bryson Sayers (SR) took over the other side. Seniors Andy Baker and Isaiah Stupart are both returning seniors in the secondary and played very fast both down hill and on the pass. They were joined by first year senior Kyle Johnson (WR/DB), Ryan Davidson (So), Kaleb Eversole (JR), and Tyson Turner (FR) on Friday night.

All in all it was a great learning experience against a state title contender and very physical opponent in the Belfry Pirates. Hopefully this helped the Dogs prepare for their opening game against the Harlan County Black Bears on August 24 at 7:30 pm, at Harlan County High School.