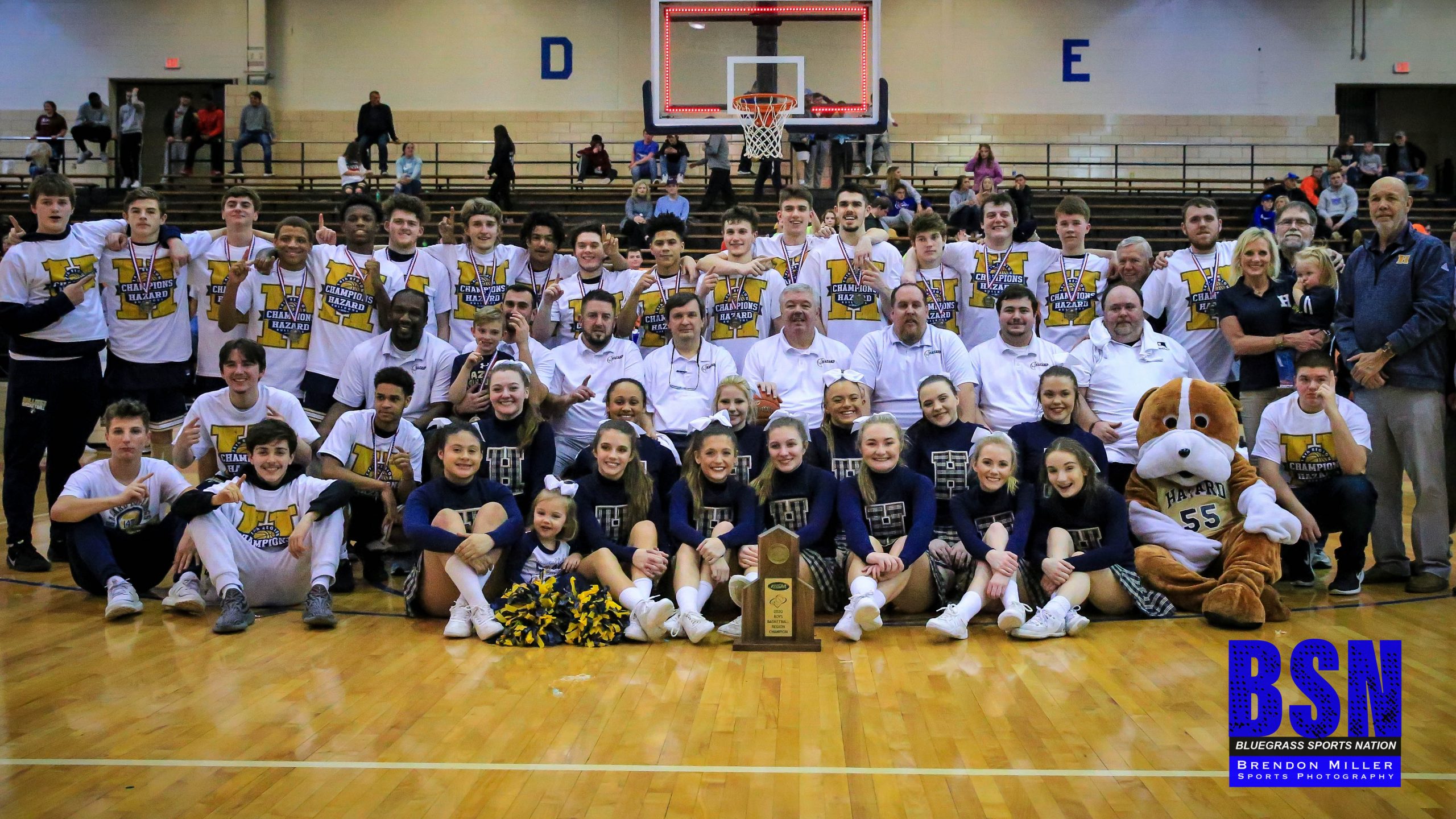 Hazard has added the 14th Region Title to its 2019-20 storybook season, with their 57-51 extra time win over a gutty and talented Wolfe County Wolfpack. This season, the Bulldogs have been WYMT Mountain Classic Champions, 14th Region All A Classic Champions, All A State Semi-Finalist, and 54th District Champions, culminating in a 28-5 record. To get to the Regional Title Game, Hazard defeated Breathitt County 59-47 and Letcher Central 65-38.

Wolfe County came to the Final as 55th District Champions and a record of 21-9, with impressive Regional wins over Perry Central 73-58 and Knott Central 74-64. The Wolves presented on Tuesday Night full of confidence and energy and the Wolves faithful packed the Morton Combs Athletic Complex.

The game tipped with a near capacity crowd and Wolfe jumped out to an early lead behind the hot shooting of Sawyer Thompson. Thompson had three buckets for six points to pace the Wolves in the 1st Quarter. Jaz Johnson added four and Wilgus Tolson had a three pointer for his three. Hazard got baskets from all five starters with Wade Pelfrey leading with four. Most significant was what appeared to be a lob pass from Logan Hall to Reece Fletcher which swished the net for a three pointer. At the end of the 1st, Wolfe was in the lead 16-14.

At the break, Holland directed the Bulldogs to take the ball in the paint, and they did with Hall constantly posting and taking the ball to the basket. Hall had four baskets for eight in the 2nd Quarter. The Bulldogs also turned up the defensive intensity holding the Wolves to just five points in the quarter. Wilgus Tolson had all five of those points, and at the half, Hazard lead 26-21.

Wolfe attacked in the 3rd Quarter and Johnson, Tolson and Thompson all knocked down trey’s. Hazard had two threes of their own from Jacob Johnson and Jarrett Napier to send the teams to the 4th, with Hazard in the lead 36-33.

The free throw line would be crucial in the 4th, as Hazard would not score a field goal in the Quarter. The Bulldogs 9 of 14 in the quarter. Wilgus Tolson shined bright in the quarter. With the Wolves down 45-42 with 16 seconds on the clock, Tolson was fouled on a three and went to the line with three shots and an opportunity to tie the game. With the weight of Wolfe County hopes on his shoulders, Tolson calmly sunk all three to tie the game at 45. Hazard could not convert at the buzzer and the Regional Title would be decided on overtime.

Hazard took control of overtime behind to-be-named Tournament MVP Hall. Hall had two baskets and was 2 of 2 at the line for six in extra time to total his team-high 21. Hazard converted 8 of 10 at the line to out score the Wolves 12-6 and secure the 14th Region Title.

This was the 10th 14th Region Title for Coach Legend Al Holland.

NEXT
Hazard will take on 6th Region Champion Fern Creek in the Whitaker Bank KHSAA Sweet 16 with tip set for noon on Thursday, March 19th at Rupp Arena.