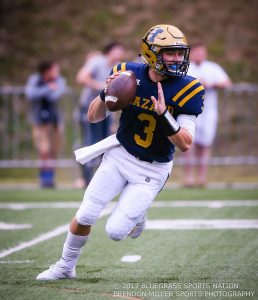 The Hazard Bulldogs opened the season at home against class 5A Harlan County Black Bears.  The game is featured as the Bluegrass Sports Nation game of the week.  Hazard finished as Class A Runner up in the 2016 season with a 12 and 3 record, Harlan County is coming off a 4 and 7 season where they were defeated in the first round of the playofffs by Pulaski County.  Although this was Hazard’s first game of the season, Harlan County entered the game with one game under its belt defeating the Ashland Blazers in the opening weekend of high school football.

Both teams have high expectations entering the season and look to build on the success of last year.  For Hazard, the ultimate goal is to get back to compete and win the Class A Championship.  Harlan County is a program on the rise and with the opening win of the season against perennial powerhouse Ashland, expectations have rose and Harlan County looks to compete in advancing in the Class 5A playoffs.

The excitement of the opening kickoff of the season is a special time in the Bluegrass.  Hazard’s Daniel Field created an enjoyable fan experience and one of the best atmospheres I’ve been able to attend.  Hazard has fans parked around the perimeter of the field, parked on 3 corners of the field, people grilling out and many parking spots reserved for the Bulldog Faithful.  When the Bulldogs enter the field, the students form a line chanting, while pumping up the players getting ready to enter the field.  Machines release smoke, the sirens go off and the Bulldogs charge the field to an ecstatic crowd.

The game was expected to be a good game with many giving a slight edge to the Harlan County Black Bears due to being a larger school and the strong showing they had against the Ashland Blazers in week one of the season.  Hazard opened the game on the defensive end of the ball with Harlan County winning the coin flip and elected to receive the ball.  The first series of the game, both teams went three and out, while not being able to convert on the first down.  On the second series, Hazard was able to get an interception and later scored a touchdown taking an early 7-0 lead.  Hazard would again force a turnover later in the half and again score another touchdown, taking a 14-0 lead.  Hazard’s defense was solid in the half and Harlan County couldn’t get any flow to their offense.  Defensive backs were in excellent position and the front line pushed back and made Harlan County uncomfortable in throwing or running the ball. As the half ended, Harlan was able to get into a flow marching down the field and scoring on a touchdown.  Harlan County went for 2 points trying to reduce the deficit, but were unsuccessful in doing so.  The drive was Harlan County’s best of the night, being one of the few times all night that Harlan could advance the ball into scoring position.  At the half Hazard had a 14- 7 lead.

The second half began and at this point the game was still very much in play for both teams.  The second half turned into a defensive battle as both teams tightened up their defensive intensity. The teams had several positions that went three and out and crossing mid field occurred sparsely.  Hazard did have one series late in the third quarter where they were put into scoring position.  After three straight plays running the ball, they were unable to convert and settled for the field goal attempt.  The attempt was good giving Hazard a commanding 17- 6 lead.  The play would be the last scoring play of the game and Hazard would prevail to a season opening home win against a solid Harlan County Black Bears team.  Hazard’s Cory Smith who is a pre-season Mr. Football had another great game rushing 20 times for 122 yards, while scoring 2 touchdowns.  Smith is nearly a 3000 yard career rusher and is expected to play football at the next level.  Look for Smith to have a strong game next week as the Bulldogs again play at home next week against the Letcher County Central Cougars.

Hazard starts the season with a 1 and 0 record.  The Bulldogs will again play at home against Class 3A Letcher County Central Cougars.  Harlan County has a 1 and 1 record after the second week of the season.  Harlan will travel on the road to take on Class 6A Tates Creek Commodores.  Good luck to both teams and it has been enjoyable covering your respective teams.  Bluegrass Sports Nation will continue our game of the week coverage next as the Knott County Central Patriots travel down Highway 80 to take on the Perry County Central Commodores.  We look forward to another exciting weekend of high school athletics.