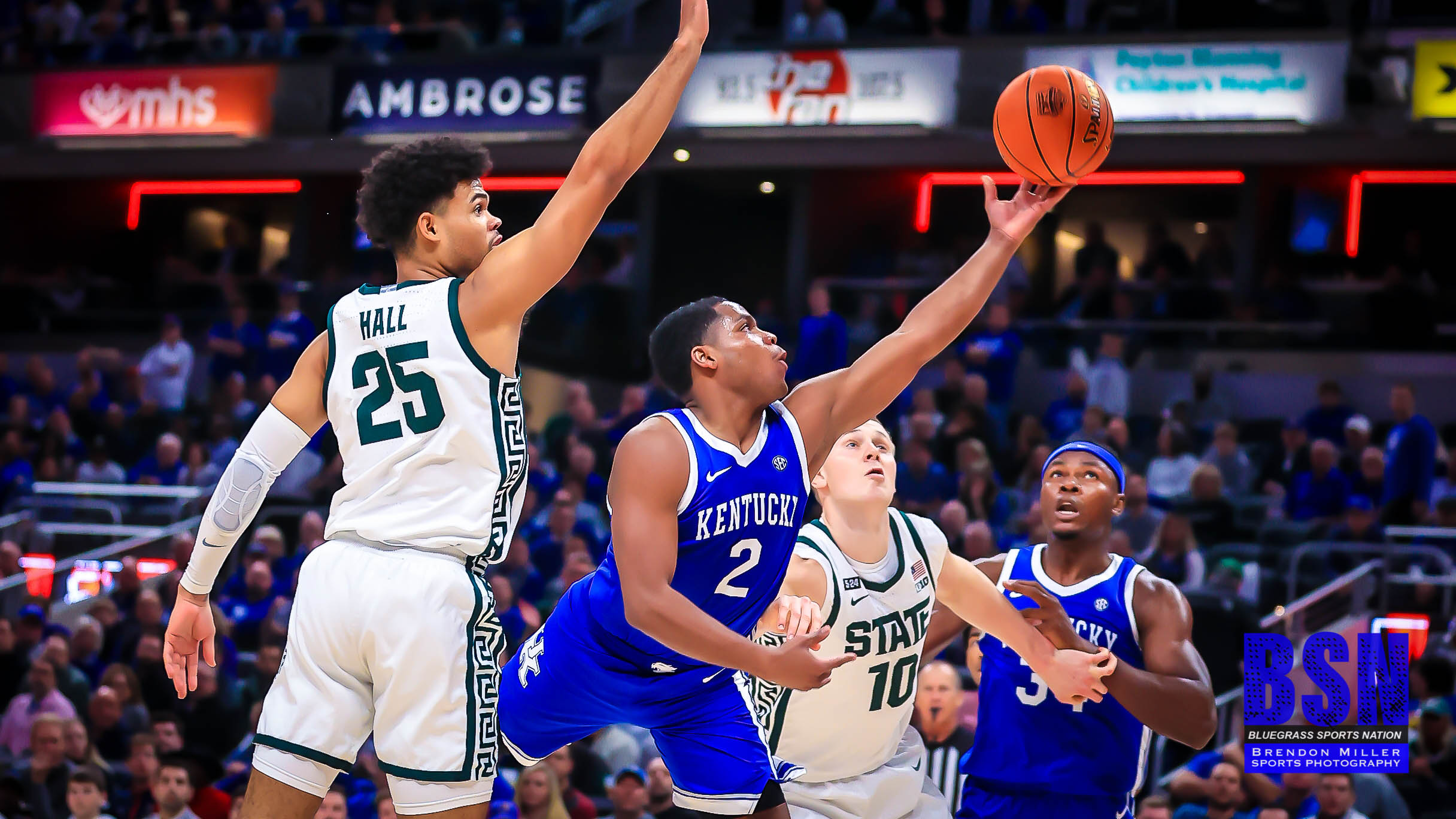 The fourth ranked Kentucky Wildcats were upset tonight by the unranked Michigan State Spartans 86 to 77. It was an exciting double overtime game, but the way the Wildcats lost was disappointing to say the least. The Spartans scored on wide open layups at the end of regulation and the first overtime that if stopped would’ve given the Cats the victory. When Oscar Tshiebwe fouled out at the end of the first overtime Kentucky had no offensive scheme and didn’t score for the last 4 minutes of the second overtime.

The return of the Oscar Tshiebwe was an outstanding one. Tshiebwe picked up where he left off last seaso, ending the game with 22 points and 18 rebounds. Calipari said prior to the game that his minutes would be limited, but he played for 34 minutes and it was obvious he was the leader on the court.

If Oscar was UK’s player of the game, Cason Wallace deserves runner-up. Wallace’s defense was unmatched on either team. Wallace tied 1the Kentucky single game record with 8 steals. He also scored 14 points and had 5 rebounds.

The previous two games at Rupp Arena proved that Kentucky can shoot the three at a high percentage, but that was not the case tonight. As a team, the Wildcats combined for 7 for 25 from behind the arc. Their main sharp-shooters, Antonio Reeves and CJ Fredrick, combined to miss 7 of their 9 threes. Neither player could get an open look, and Fredrick could not create his own shot. In the post-game press conference Calipari acknowledge that he should’ve played Reeves more because he can get to the rim.

The Jinx of Indianapolis and Champions Classic

Indianapolis has been a thorn in the Cats side as of late. Not only did Kentucky lose tonight’s game there, but the first round NCAA loss to St. Peter’s was in Indianapolis. The Champions Classic has not been kind to the Cats. UK is 1-5 in the last 6 games and since it takes place at the beginning of the season, it puts a damper on the fan’s spirits early on.

In the prior games, without Oscar Tshiebwe, the Wildcats did not have a problem scoring the ball. Getting Tshiebwe back slowed the offense to a stand still especially when Oscar wasn’t in the game. Calipari needs to fix this. The Wildcats have one more home game against South Carolina State to prepare for the road game against Gonzaga. Perhaps the best fix for the offense is playing Fredrick and Reeves together more. They played together less than 5 minutes tonight in a double overtime game. They were the best two offensive options before Oscar returned and should be on the court together. Overall, this team has potential and look like they are posed to make a run in the tournament.