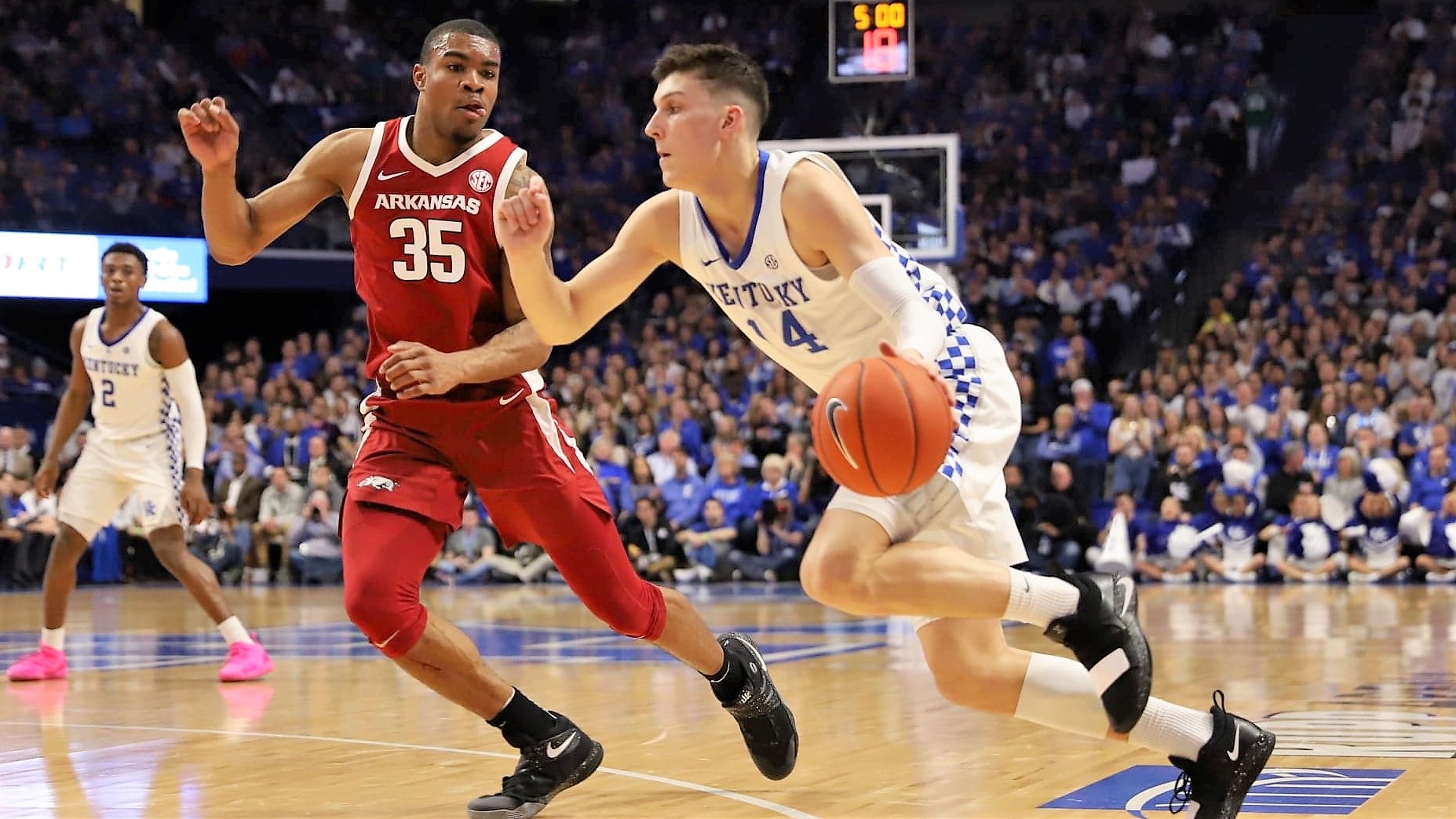 CATS battle back to defeat Arkansas 70-66

The Arkansas Razorbacks came into Rupp Arena tonight to face the Wildcats in a late 9 pm tip. Kentucky, who dominated Auburn in the game Saturday, is in a three-way tie for the SEC Championship with Tennessee and LSU. Their great play recently has put them in contention for a one seed in the NCAA Tournament.

The Razorbacks were looking to snap a 6 game losing streak against the Cats and break their current losing streak of 5 straight SEC loses. A win for Kentucky would be 14 wins in the last 15 games and and give Calipari his 299th win as UK’s coach.

The Cats were sluggish at the start of the game and found themselves down eight with 10 minutes left in the first half and it didn’t get any better from there. Kentucky had 12 first half turnovers that led to 14 points for Arkansas. Meanwhile, Kentucky’s defense only forced 1 turnover and they allowed Arkansas’ Isaiah Joe to score 16 points in the half. The Rupp Arena crowd was silent for most of the half after watching their Cats end the half down 28 to 39.

Coming out of the locker room the Cats started out on the right foot and went on a 6 point run cutting the Arkansas lead to 9. Kentucky tightened down on defense and after a 21 to 6 run P.J. Washington tied the game at 51 with 8:10 remaining in the game. It was a close contest the rest of the game with Kentucky holding a slight margin. With 2 seconds left on the clock Big Blue Nation held their breath when the referees went to the monitor to review who the ball when out on. Immanual Quickley sealed the victory for the Cats hitting 2 free-throws with 1.3 seconds remaining to give UK a 70-66 win.

It was a tremendous effort by Tyler Herro who scored a career high 29 points, shot 90% from the field, and hit 5 of his 6 three-pointers. Nick Richards also had a career night grabbing 15 rebounds and had 3 blocks.

The difference in the two halves was the amount of intensity of Kentucky’s defense. They forced only one turnover in the first half, but caused the Razorbacks to turn the ball over 6 times in the second. The Wildcats also only allowed Isaiah Joe to score 3 points in the second half. Their defense also got the Rupp Arena crowd to finally start cheering.

The Cats’ ability to come back from 15 points down to win was impressive. Hopefully, they wont find themselves down double digits when they travel to Knoxville to take on the Volunteers this Saturday. The game can be viewed on CBS at 2 p.m.