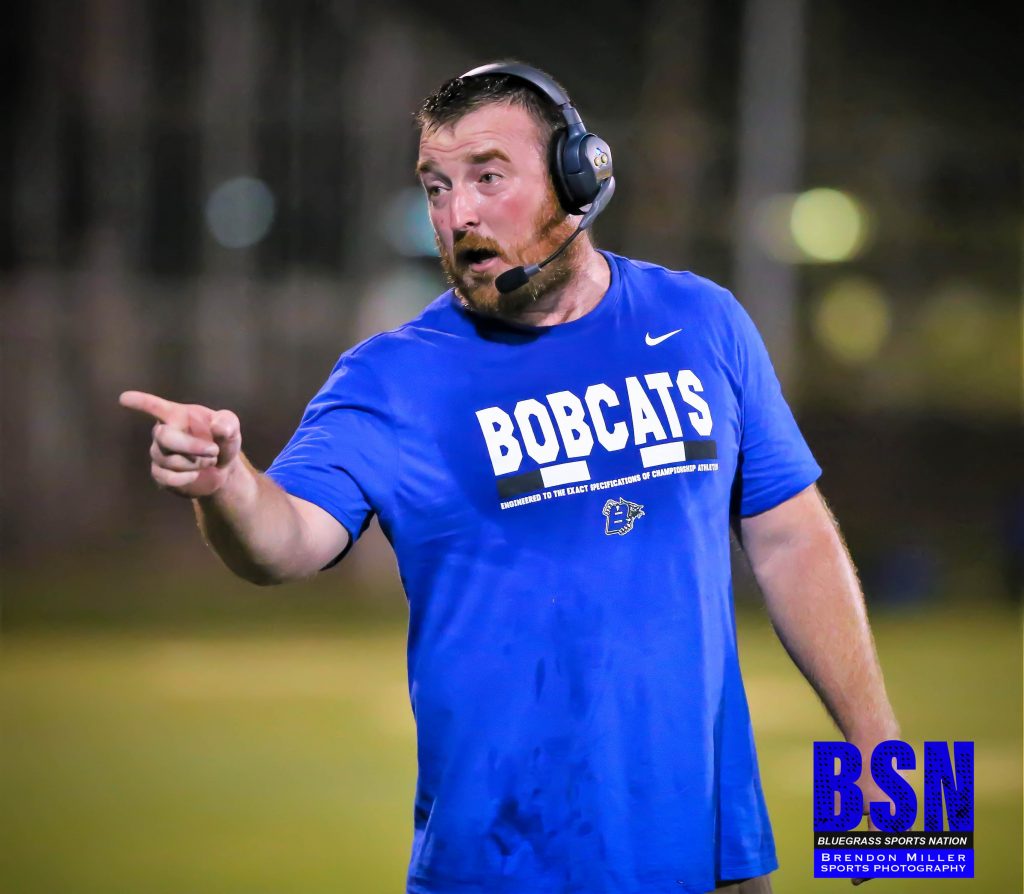 Breathitt is coming off an impressive come from behind victory over the Leslie County Eagles.  Leslie jumped out on the Bobcats 12-0 to start the second half.  Many teams would have folded up their tent and went home, but the Breathitt Bobcats did the exact opposite.  They thrived in the situation, leaning on each other and showing what kind of character they have by fighting their way to a 22-19 victory.  The game winning score came with under 30 seconds left in the ball game.  Coach Kyle Moore posted on social media how proud he was of his team’s fight.  “Can’t sleep tonight. Not a great game by any means but I love these young men and the fight that they have in them. #neverquit.”

In my opinion a team is the direct reflection of their coach.  Coach Moore has never given up on his team, nor his program.  With the state managing the school system and the feeder program getting gutted, the once highly sought-after position of Breathitt Football Head Coach, was not so desirable with those circumstances.  Kyle Moore welcomed the challenge, in fact,  embraced it, and just as he did as a player, took the reins and moved forward.

Coach Moore’s Bobcats followed that example and moved forward last Friday night.  They dug their cleats a little deeper and pushed back.  What do all good teams have in common?  When faced with adversity they stand their ground and band together.  This team has done just that in the first half of this season.  From Cameron Stacy being out with a health issue, starting the season 0-3, and losing the lead with 20 seconds left against a good Floyd Central team, these Bobcats have been dealt their fair share of adversity.

How have they responded?  By winning the last two games against rival teams.  Playing four quarters of football collectively as one unit, with one heartbeat.  This team has truly been a direct reflection of their coach.

I could give you stat after stat.  I could talk about how impressive a few players have been for the Bobcats but the truth is, nothing has been more impressive than this team’s heart.  It can’t be measured in wins and losses or touchdowns scored.  It can’t be taught.  This team has the heart of a champion.  Playing together on both sides of the ball for the entire duration of the ball game.  It hasn’t been easy, but if it was, everyone would do it.  That’s what makes Friday Nights so special.  If you haven’t watched this group of Bobcats play you are missing out.  They exemplify what it means to be a Bobcat.  As an alumnus, I am proud of what this team is doing.  This team has represented themselves, their coaches, and their community well as we meet the half way point of the season.

The Bobcats are on the hunt for their 3rd win in a row this Friday night as they welcome the Knott County Central Patriots to the “River Bank.”  Breathitt is undefeated when playing the Patriots. Although Knott County has come close on multiple occasions, historically the Bobcats have dominated the series.  KCC will be looking to do what the Kentucky Wildcats did against Florida and exercise some demons when they come to Jackson.

The Patriots are led by running back Ty Hollon.  The offense of the Patriots runs through Hollon.  In the Patriots lone win of the season, Hollon amassed 122 yards and 2 touchdowns on 27 carries. Hollon is also a standout on the defensive side of the ball as he is one of the Patriots’ leading tacklers as well.  Last year saw the Patriots fall just short of the monumental victory over the Bobcats in a high scoring affair.  The Patriots put up 43 points in a valiant effort.  Hollon was the bell cow on the ground in that game as he rushed for 172 yards on 13 carries. Cameron Jones, who transferred from KCC to Fredrick Douglas, threw the ball for 300 yards and 5 touchdowns against the Bobcats in last year’s thriller.  For the Patriots to pull off the upset, they will need a similar performance from sophomore quarterback Nick Miller.

If history isn’t a big enough motivator for the Patriots, then Friday Night being Homecoming for the Bobcats is the cherry on top.  Can the Patriots spoil the Bobcats’ homecoming?  Or will Breathitt continue their dominance in the series?  Come out and support these local athletes this Friday Night.  If you are unable to make it to the game, stay connected by visiting our facebook page and our website at www.bluegrasssportsnation.com.

BSN will have our full coverage of the game including Pregame interviews with Coach Moore and Knott Coach Larry Maggard, in-game stats, in-game and post-game pictures, post-game thoughts of Coach Moore and a Saturday morning recap.  BSN will also have pictures of the Homecoming Court and Queen!

Thanks to First National Bank, Lakeside Homes of Jackson and Breathitt County Tire for sponsoring our coverage of Bobcat Football.