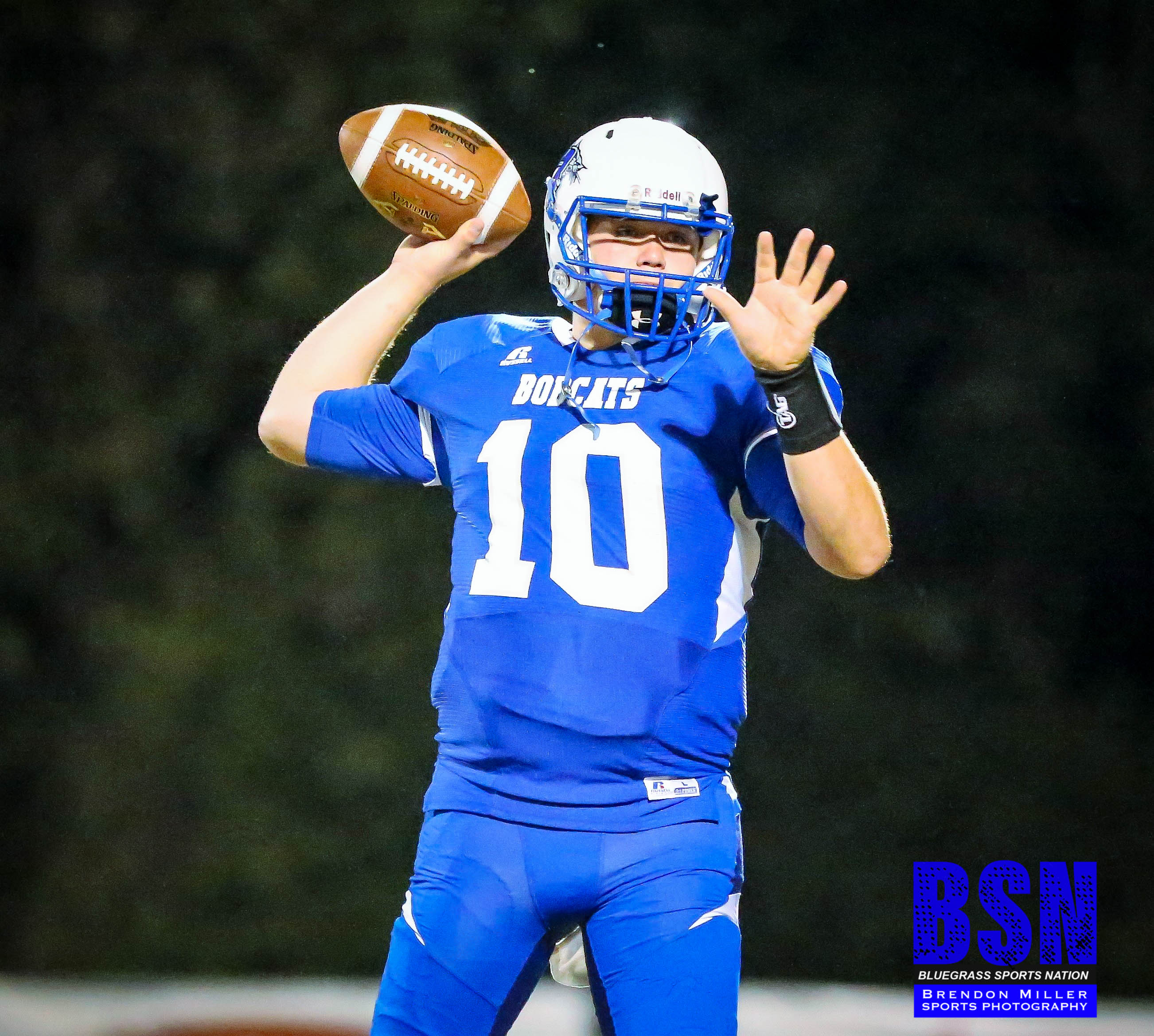 Breathitt cruised to a 48-6 victory over the Magoffin County Hornets on the River Bank to end their regular season in a penalty marred game.  Although Breathitt lit up the score board, Breathitt Head Coach Kyle Moore knows that eliminating penalties is a must for the Bobcats to be successful in the playoffs, “The game got a little ugly for us in the second quarter. We had a lot of penalties and we have to clean that up.”  At the half, Breathitt had 8 penalties for a total of 80 yards.  36 of those yards came on one drive on back to back to back plays.  Other than the penalties, Senior Night was a successful and emotional evening for the Bobcats.

The Bobcat faithful honored their 12 Seniors prior to the game, and Coach Moore showed his appreciation for these fine young men by starting all 12.  Cameron Stacy jogged on to the field as a starter for the first time this season after being sidelined with a health issue for the first six games.  On just the 3rd play from scrimmage, Stacy showed his arm strength as he connected with Brandyn Slaughter for a 53 yard touchdown strike.  The touchdown marked Stacy’s first touchdown of the season, and was an emotional moment for everyone in attendance to see this young man doing what he had done so many times in his Bobcat Career.

Also making his first appearance of the season was J.T. O’hair who transferred back to Breathitt from Estill County, and was just ruled eligible earlier this week.  O’hair had an immediate impact as he caught an absolute dime from Cameron on a post route in the 1st quarter that set Breathitt up deep in Magoffin territory.  J.T. also caught a 2 point conversion were he jumped over a player to snag the catch. A play that could easily makes NFL Countdown’s “You Got Mossed” segment.

Tyson Gross showed his incredible athleticism and speed as he tallied 99 yards on 8 carries for 2 touchdowns, and added a 54 yard punt return for a touchdown.  Braxton O’Hara was his usual dominant self posting 135 yards and 2 touchdowns on the ground.  O’Hara added 68 yards through the air for another score.

Brandyn Slaughter has torched defenses all season long and Magoffin would be no different. Slaughter caught two passes for 98 yards and 2 touchdowns.  The interesting stat about his two catches, one was from Cameron Stacy, and the other was from Braxton O’Hara.

Breathitt did the majority of their scoring in the first half as they tallied 31 points.  The second half saw the Bobcats slow things down and attempt to chew clock. Breathitt added two more scores that resulted in a running clock for the entire fourth quarter.

Jacob Noble put the icing on the cake as he intercepted a Hornet pass and returned it to the Magoffin 40 yard line.  As the clock hit zero it was very symbolic.  It symbolized the end of the regular season, the last time those 12 seniors would take the field knowing they would have practice on Monday, and the last District game those seniors would play in a Bobcat uniform.

Magoffin County’s season comes to an end as they finish 3-7.  Coach Justin Combs’ team showed a lot of heart fighting to the very end and that is something to be proud of.  Coach Combs’ and staff have done an excellent job changing the culture at Magoffin County.  In just his second year as the Hornet Head Coach, Combs has instilled a lot of what he learned while playing at Breathitt in his program.  No doubt the Magoffin County Hornets will put tremendous amount of work in during the offseason and will be hungry next season.

Breathitt will represent their Class 3A District 7 as the #1 seed and will host McCreary Central in the first round of the playoffs.  Bluegrass Sports Nation covered the McCreary Central Perry Central game which was the opener for both teams.  Although McCreary Central will be a tough outing for the Bobcats, Breathitt will be favored to win and advance.  One thing is for sure, there is a buzz around this Bobcat team, and entering the playoffs no one wants to play the Bobcats.  The bye week could not come at a better time for the Bobcats as they adjust their mindset from their District Championship run, to making noise in the post season.  One thing is for sure, Breathitt has weapons all over the field and with the defense improving every week, this team is dangerous!!! 7 in a row, and on we go!!!

Thanks to our sponsors of Breathitt Football:  First National Bank of Jackson, Lakeside Homes of Jackson, Variety Pizza and Breathitt County Tire!!!!  Let them know you appreciate their support of the Bobcats!!!