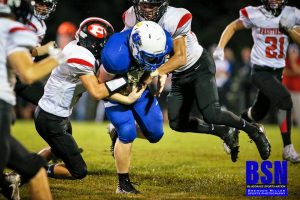 0-3 ….. That is what the Bobcats  were coming into last night’s game. Most teams would be ready to throw the towel in and give up. Not these Bobcats. These Bobcats continued to show up too practice, refusing to be that type of team. These Bobcats accepted the challenge and rose to it.

This week’s challenge came in the form of the Prestonsburg Blackcats. The Blackcats made their 3rd consecutive road trip, having lost their first 2 games. One of these teams would leave the field with their first win of the season.

Breathitt received the opening kickoff and methodically drove the ball deep into Blackcat territory before turning the ball over on the 6-yard line. A much-improved Breathitt County defense would take the field. Ladaniel Whitaker would force a fumble, which rolled out of the end zone resulting in a safety. The safety marks the first points that the Breathitt defense has scored this season.

Coach Brewer in his pregame interview with Bluegrass Sports Nation talked about how explosive the Bobcat offense could be and that was a focus for the Blackcats this week. The Bobcats would show just how explosive they are on the very first play of their second possession. Braxton O’hara dialed up a stable of the Breathitt County offense when he delivered a 47 yard bomb to his favorite target Brandyn Slaughter for the first touchdown of the game. Breathitt added the extra point and the score with 6:38 left in the first quarter…. Breathitt 9, P-Burg 0.

Breathitt’s defense continued to prove just how scrappy they can be. Flying from sideline to sideline these young men were on a mission defensively. The Bobcats would end the first quarter not allowing the Blackcats to score. The Bobcats would again force a fumble with 9:40 left in the half.

Tyson Gross then decided that tonight was going to be his night. Leading the Bobcats on a scoring drive that seen Gross scamper into the end zone from 8 yards out. The Bobcats were unable to convert on the extra point and the Bobcats would be in control 15-0.

Prestonsburg desperately needed to get their offense going. To do that, they would lean heavily on the shoulders of their senior running back Ethan Varney. Varney, the cow bell of the P-burg offense carried the Blackcat offense on his back down the field. Varney would eventually score from 1 yard out and converted the 2 point conversion for the Blackcats making the score 15-8 in favor of the Bobcats.

With just under 4 minutes left in the first half the Bobcat offense would once again breathe life into the Prestonsburg Blackcats by fumbling the ball. Never fear however, the Bobcat defense is here. Just as they did last week against Floyd Central, the Bobcats would come up huge with a 4th and 1 stop deep in their own territory with just over a minute remaining in the half.

Breathitt seemed to be content with the one score lead and run the clock out. Tyson Gross had other plans as he would bust through the Blackcat defense for a bruising 59 yard run. Braxton O’hara would follow that up with a 12 yard touchdown strike to Jacob Noble with just 9 seconds remaining in the half. Breathitt failed to convert the extra point try and the score at the half 21-8 Bobcats.

It would be all Bobcats from this point. As the final score would be 41-8 in favor of the Bobcats. Tyson Gross would finish the night with 21 rushing attempts for 197 yards and 3 touchdowns. Braxton O’hara would complete 3 of 4 passes for 68 yards and 2 touchdowns. O’hara would also add 58 yards and a touchdown rushing the ball. Dalton Manns would finish the night rushing 12 times for 89 yards. Bradyn Slaughter and Jacob Noble both caught a touchdown pass. Breathitt’s offense produced 409 total yards with 341 of them coming on the ground.

Story of the night was the play on the defensive side of the ball. Collectively the defense played lights out only allowing 116 yards of total offense. The defense would force 2 turnovers and scored a safety as well. Braxton Eiserman and Jason Noble were all over the field. Breathitt’s defense was absolutely suffocating.

The Bobcats are now on a one game winning streak and will look to keep the momentum on their side as they travel to Leslie County for a date with the Eagles. The Leslie County Eagles are on a losing streak of their own as they are winless this season. Breathitt will be looking to avenge their loss from last season in a game that Leslie County dominated 50-14. Breathitt is beginning to click at the right time as they near district play. Stay tuned to all things Breathitt Football by liking and sharing our Facebook page. You can also stay connected by visiting our website at: www.bluegrasssportsnation.com