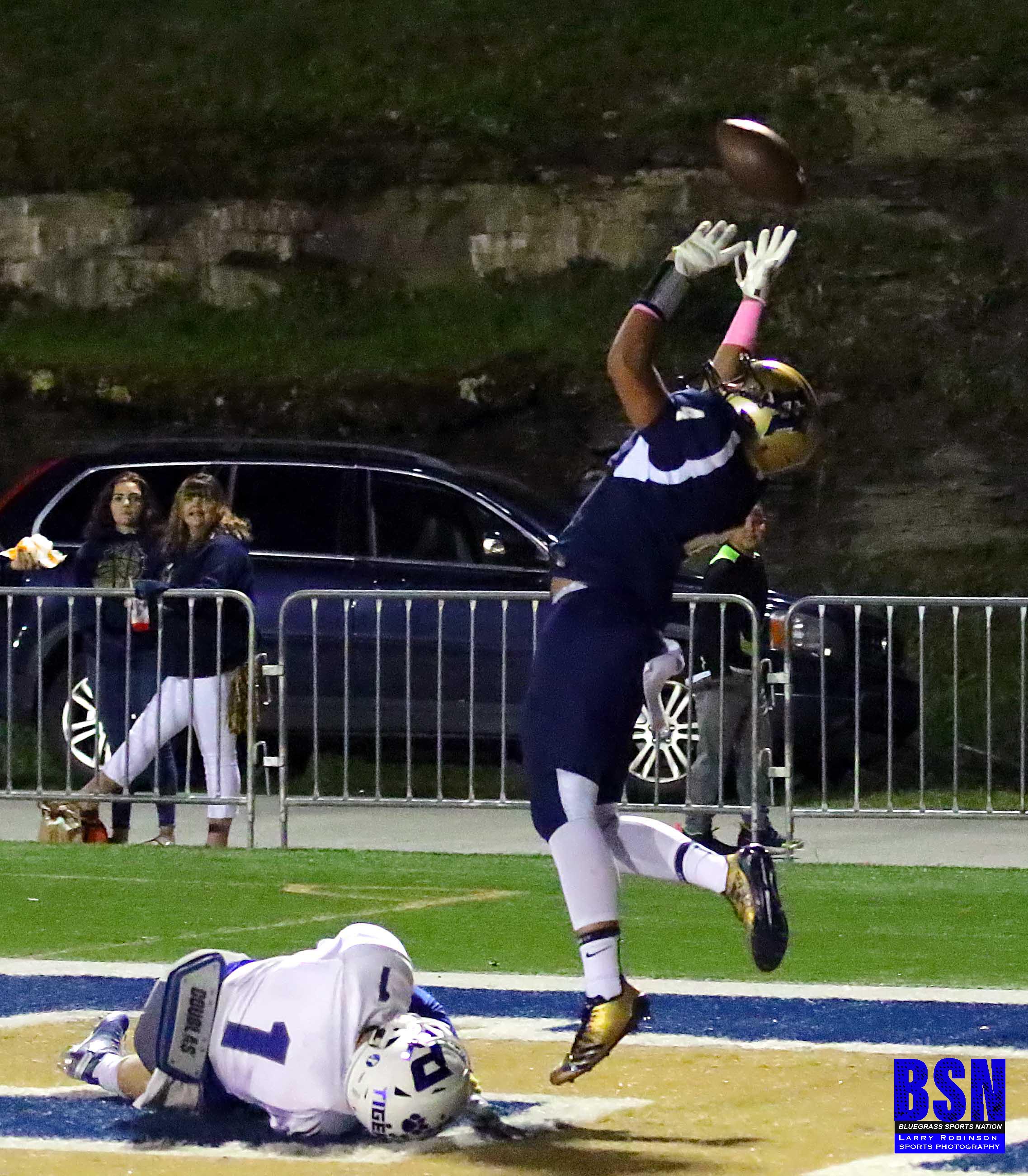 As the season progresses, it seems as though there are four teams that have the ability to represent the eastern half of the state in the class 1A state finals. The preseason favorites Pikeville Panthers and Raceland Rams have not disappointed so far this year. Both teams have won games they should have and also competed against larger class schools as well. Raceland’s lone loss has came at the hands of the #1 team in Class 4A, the Ashland Tomcats 21-14. Pikeville’s two losses have been to 3A #3 Belfry and West Virginia 2A powerhouse Point Pleasant. Hazard and Paintsville have also shown flashes of good football and could vie for a spot in the semifinal game come November if they can get things going at the right time. Friday’s game saw the Bulldogs play host to the Tigers and was set to be a great match up from the start.

Hazard’s defense started the game strong after the opening kickoff, forcing the Tigers to a quick 3 and out series. The Bulldog offense sputtered but a well timed fake punt saw freshman Zane Deaton scamper 46 yards to get the Bulldogs deep into Tiger territory. An 18 yard pass from Bailey Blair to Isaiah Stupart put Hazard on the board first, going up 7-0 after a Jonah Helm point after. Paintsville immediately answered with a score of their own to tie the game and took the lead on the next Hazard possession when Paintsville’s John Phelps intercepted a Blair pass and returned the ball for a touchdown. Again, Hazard answered and finished a long drive with a Skylar Pelfrey 2 yard dive into the end zone to bring the score back even 14-14. The next two minutes and eleven seconds of the game would be one of the craziest and hardest two minutes for the Bulldogs so far this season. The closing minutes of the first half was one of “if it could go wrong, it did go wrong” for the Bulldogs. Paintsville drove down the field and scored going up 21-14. Hazard fumbled the kickoff following the Paintsville score and the Tigers found the end zone on the first play from scrimmage when Tiger QB Jake Hyden found Phelps on a pass to go up 28-14. Hazard then went three and out and lost yards on every play their next possession. A mishandled punt set up a short field and a field goal for Paintsville to put the Tigers up 31-14 at the intermission.

After the break, Hazard regrouped and put together one of the most exiting 2 quarters of football all season. The Bulldogs found the end zone on their second possession of the second half, led by a Pelfrey 53 yard scramble, and finished off with a Blair 8 yard run to pull Hazard within 10 with 7:42 to go in the 3rd quarter. It was a stalemate between the two until the start of the 4th quarter when Isaiah Stupart returned an interception 35 yards, deep into Tiger territory that set up a 30 yard Helm field goal to bring the Bulldogs within 7 with 10:04 left in the fourth. The Tigers sustained a drive deep into Bulldog territory but came away empty handed when Stupart blocked what would have been an easy Paintsville field goal. Hazard’s next drive was aided by several Tiger miscues that saw them commit a defensive hold, an unsportsmanlike penalty by a coach, and Hazard QB Blair was able to draw Paintsville off sides an unbelievable 4 times before Blair scored on the ground from 1 yard out and bring the Bulldogs back even at 31-31 with 3:52 left in the 4th. Paintsville didn’t waste time as they marched down the field and punched the ball into the end zone with less than two minutes to go. Hazard pushed the ball down the field with Blair targeting upperclassmen Stupart, Andy Baker, and Mason Collins on passes during their two minute offense before Blair found Baker on a 10 yard strike to bring the Bulldogs within 1 at 38-37. Hazard elected to go for a fake field goal and the Tigers were able to intercept the pass and preserve their win.

The Bulldogs were steady the second half after a rough opening two quarters. On the night Blair went 9/20 for 150 yards, with 1 passing TD against 1 interception and 2 rushing TDs. The Bulldogs earned 371 tough yards against a very good Tiger defensive line and secondary. Hazard’s Skylar Pelfrey rushed 17 times for 117 yards. Deaton (46 yds), Blair (44 yds), Reece Fletcher (13 yds), and Trajon Campbell (2 yds) also added yards on the ground. Stupart led the Bulldogs in receiving with 79 yards and 1 touchdown. Baker (59 yds, 1 TD) and Collins (12 yds) also hauled in Blair passes. Helm added 7 points of his own by going 4/4 with PATs and putting in a 30 yard field goal.

Defensively the Bulldogs gave up a couple of big plays that allowed the Tigers to stay on the Bulldog side of the 50 for much of the night. Hazard was led on the night in tackles by Reece Fletcher with 12. Stupart (9), Collins (8), Ben Adams (7), Jacob Brashear (6), Baker (6), Bryson Sayers (5), Parker Holbrook (5), Campbell (5), Pelfrey (4), Ryan Dean (3), Ethan Gibson (2), Campbell Davis (2), Cameron Caudill (2), Tyson Turner (1), Helm (1), and Kaleb Eversole (1) all had tackles on the night. Bryson Sayers and Ben Adams recorded a tackle for loss and Isaiah Stupart put up a 35 yard interception return.

So far this year the Bulldogs have been in the hunt with with some of the best teams in class 1 and 2 A. They have been down to the wire with both Pikeville and Paintsville only to come up short in both contests. Hazard will need to find that edge to get them over the hump and make noise in the playoffs. The Dogs never laid down or gave up Friday night and showed a great amount of heart that may push them over the bump later in the season. Hazard will host the Leslie County Eagles next week at Daniel Field. Game time is set for 7:30pm. Check BluegrassSportsNation.com on Thursday to get a preview of the Bulldogs and Eagles.