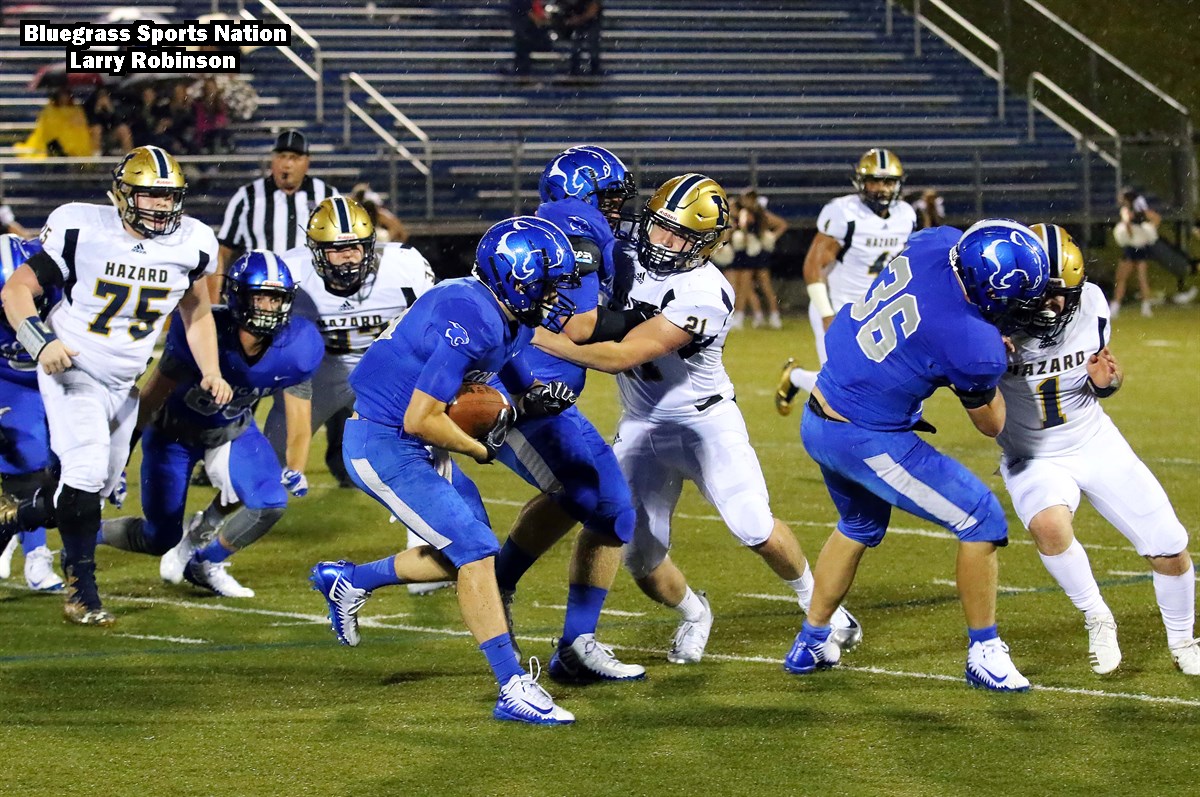 The Hazard Bulldogs extended their regular season winning streak to 2 after their lightning delayed game finish just before midnight Friday night. The Cougars entered the night 0-2 with their two loses coming to Knox Central and Bell County. The Bulldogs were fresh of a season opening victory against the Harlan County Black Bears. With several games in the area being delayed due to lightening, the Cougars and Bulldogs would end up warming up twice before the contest finally got underway around the 9:00pm mark.

The Bulldog defense that struggled at times in Harlan County came out on a mission Friday night. They would eventually give up only 14 points on the night. The bend and not break defense stopped the big play that had plagued them against the Black Bears the week before. The Bulldogs were able to get off the field on third downs and allow their offense to work. Andy Baker led the Bulldogs with 9 tackles. Again this week, several Hazard players were in and around the ball on the defensive line of scrimmage. For the second week straight Hazard had 20 plus players record tackles. 22 Bulldogs made their way onto the defensive stat sheet. Other Bulldogs recording tackles were Zane Deaton (6), Skylar Pelfrey (6), Mason Collins (5), Reece Fletcher (5), Parker Holbrook (5), Isaiah Stupart (5), Trajon Campbell (4), Bryson Sayer (3), Jondon Olinger (3), Kenton Beverly (3), Cameron Caudill (2), David Cornett (2), Campbell Davis (2), Kaleb Eversole (2), Ben Adams (1), Matthew Couch (1), Ryan Davidson (1), Nate Smith (1), Dalton Strong (1), Hootie Thomas (1), and Tyson Turner (1). In addition to swarming to the football the Bulldogs were also stingy through the air with Isaiah Stupart and Skylar Pelfrey coming down with two interceptions with almost 80 return yards. The Bulldogs also picked up a fumble recovery on kickoff when Tyson Turner jumped on a ball that was misplayed by a Cougar kick returner.

An already efficient offense continued it’s ways Friday night. The Bulldogs exploded for 43 points for the second consecutive week. Quarterback Bailey Blair was steady as usual in difficult, wet passing conditions. He finished 9/17 on the night with 139 yards passing, 3 TDs, and 48 yards rushing. The Bulldogs offense that would interchange between the power run game and spread offense mounted several drives Friday night with no punts. The rushing attack was once again led by Skylar Pelfrey who had 110 yards rushing on 18 attempts. Several of his yards came from tough running after contact, dragging Cougar defenders at times. Trajon Campbell and Reece Fletcher also contributed to the run game with 11 and 9 yards, respectively. Leading the receivers this week was the Bulldogs big tight end Mason Collins. Collins had 33 yards on the night with 1 TD. Also adding touchdowns through the air were Isaiah Stupart (30yds) and Kyle Johnson (25yds). Other receivers putting up numbers were Andy Baker (20yds), Tyson Turner (17yds), and Smiley Ford (13yds). The scoring for the night was rounded out with a two point conversion that saw an option pass from Pelfrey to Smiley Ford, and a 5/5 performance from PAT kicker Nick Combs. Just like the defensive Dogs, the Bulldog offense spread the ball around with 8 different players touching the ball Friday night.

The toughest test yet of the young regular season is waiting on Hazard next Friday night in the form of the Briar Jumpers of Somerset. Somerset fell last week to the number 1 ranked team in Class A the Beechwood Tigers 26-0 in a weather shortened affair after winning their first game of the season in convincing fashion against 5A Lincoln County 41-0. This will be a good measuring stick for the Bulldogs to have a comparable game against the top team in Class A. The Bulldogs haven’t beaten the Briar Jumpers since 2015 and will have to do it in Somerset if they wish to end the streak. Kickoff is scheduled for 7:30pm next Friday September 7th.