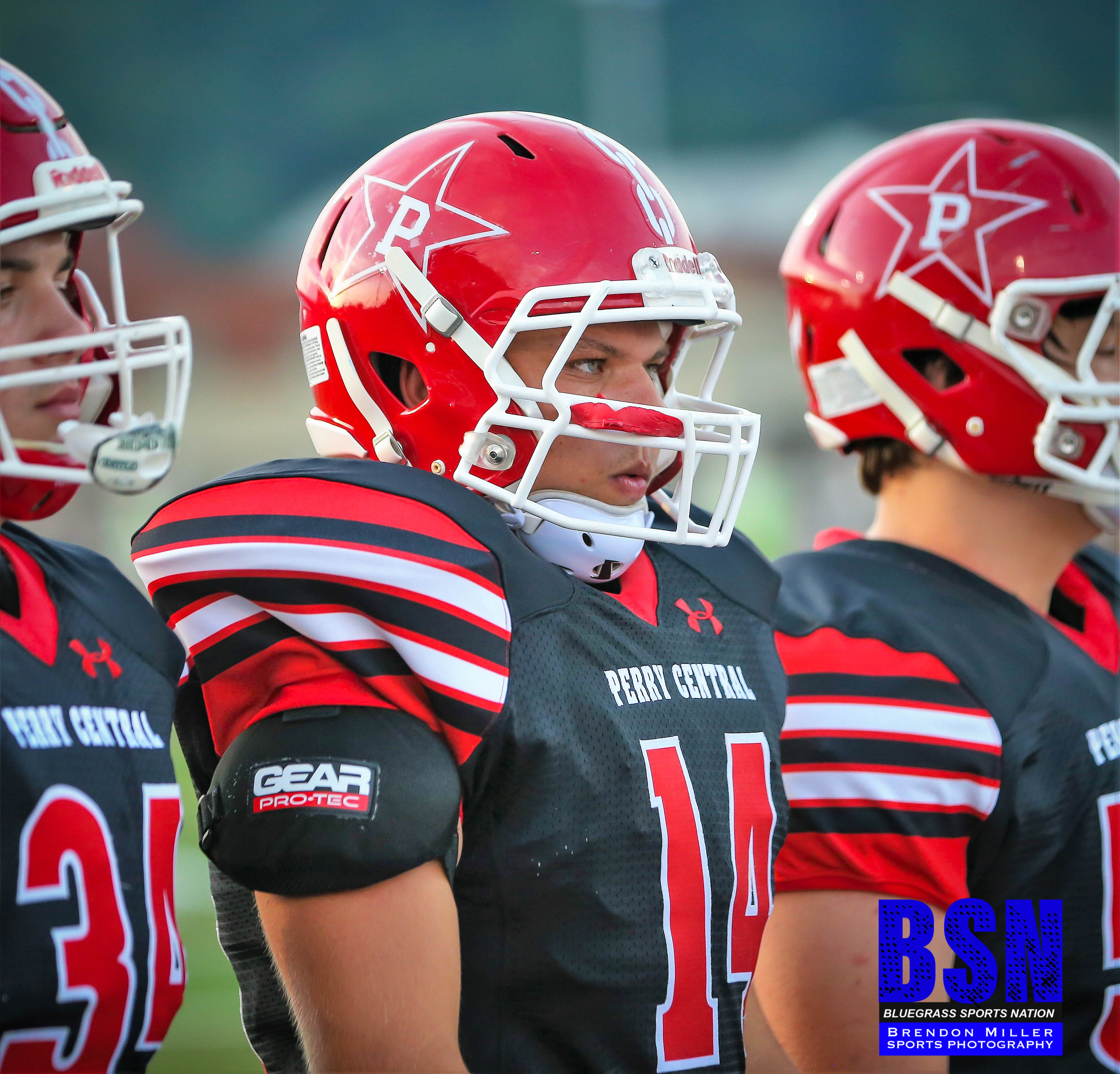 NATHAN LYTTLE – Bluegrass Sports Nation Perry Central Football Columnist
The Perry County Central Commodores got back to winning Friday night, moving to 5-1 and knocking off Pike Central, 42-35.
“It was a dogfight. I told the kids all week it would be,” Commodore Coach Ovie Canady said. “(I) tried to get them not to listen to people. Pike Central is a heck of a team … They played tooth-and-nail with a good Shelby Valley team and beat Floyd Central easy.”
Perry Central’s homecoming game got off to a slow start. The contest was scoreless after the first quarter and the Commodores went up 14-0 just before the half on the back of two touchdowns for Homecoming King  Jayden Neace.
“They did a good job against Jayden tonight,” Canady said. “I’m sure he broke 100 yards … at halftime he had 70. He had a good game, but well below the 270 yards a game we’re used to.”
The second half was a different story. The Hawks scored 14 straight points to tie the game before the Commodores put the foot on the gas offensively. Sophomore Chanse McKenzie was called up to the starting quarterback spot after a concussion in last week’s game sidelined Cameron Brown. McKenzie played exceptionally in his first game in that position, throwing three touchdowns and managing the Commodores offense for a 28-point second half.
“We played good. We could’ve done a lot better on defense but we’ll fix that throughout the week in practice,” McKenzie said. “I just came out ready to play.”
Preston Mullins hauled in two touchdown passes with the other going to Jordan Feltner. Jayden Neace finished with three rushing touchdowns. Cameron Fugate nabbed one interception for the Commodores lone turnover of the night.
The Commodores’ one loss this season was at the hands of the Letcher Central Cougars last week, meaning Letcher could win-out in district play and earn a district championship. The Cougars lost to Harlan County Friday and Coach Canady talked to Bluegrass Sports Nation about the opportunities that opens up for his team.
“We needed that to happen. If we win out, we win it,” Canady said. “We will have points over everybody because of our non-district wins. Those two teams won’t have any unless Harlan County can beat Bell at the end. Even then, I think we can still win a tie-breaker.”
The opportunity is there for the Commodores to capture the district title that has eluded them since the school’s inception. But Canady says it is not going to be easy.
“It’s all three games we could win; all three games we could lose,” Canady added. “We gotta take care of business at Whitley first and North Laurel is a tough, physical team as always.”
The Commodores head to Williamsburg next week to take on the Whitley County Colonels.
Related TopicsHS Football