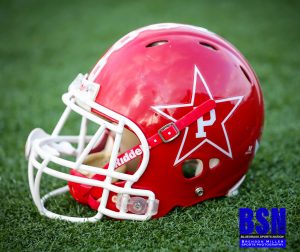 October 25, 2018 – Hazard, Kentucky – NATHAN LYTTLE – Bluegrass Sports Nation Perry Central Football Columnist
The Perry Central Commodores are on pace to have one of their best seasons ever, but look to get back to winning following a district defeat against the Harlan County Black Bears.
When asked about last week’s game, Commodore Coach Ovie Canady was quick to let Bluegrass Sports Nation Columnist Nathan Lyttle know their eyes are in front of them, not behind them.
“(My) thoughts on last week are that it was last week,” Canady said. “We have a game tomorrow that we are concerned with and that is what is most important right now. Our guys know what they have to do if we want a second shot at those guys.”
It was a tough, emotional loss that left Perry Central third place in the district, but Canady says plenty of work remains.
“Some of the guys did a lot of talking and didn’t back it up with actions last week,” Canady said. “They maybe have to get up off the floor from that in a sense, but we just need to go in and take care of business and let all that go.”
The Prestonsburg Blackcats await the Commodores Friday night. After a rough start to the season, Prestonsburg is on a two-game win streak and will undoubtedly bring the fight to Perry Central on their senior night.
“We have a had a good week of practice. We had great weather for it all week and that is always good,” Canady said. “We will head into this game mentally and physically prepared. We just need to execute what has been taught to us and win.”
Friday night looks to be a cool and soggy one for football fans and players, setting up for what could be a war of attrition between the Blackcats and Commodores. Temperatures will be in the mid-to-high 40s for the night and rain chances are high.
“There will not be many dry areas in Eastern Kentucky tomorrow. Rain chances are 100% throughout the day and 80% for Friday night,” WYMT Chief Meteorologist Andrew Dockery tells Bluegrass Sports Nation. “If you are headed to a game, grab the rain gear. It’s going to be a sloppy night for football in Kentucky.”
Kickoff is set for 7:30 p.m. from Prestonsburg. As always, you can keep up with the game on the Bluegrass Sports Nation Facebook page. You can listen to this one on the radio on WSGS 101.1.
Related TopicsHS Football