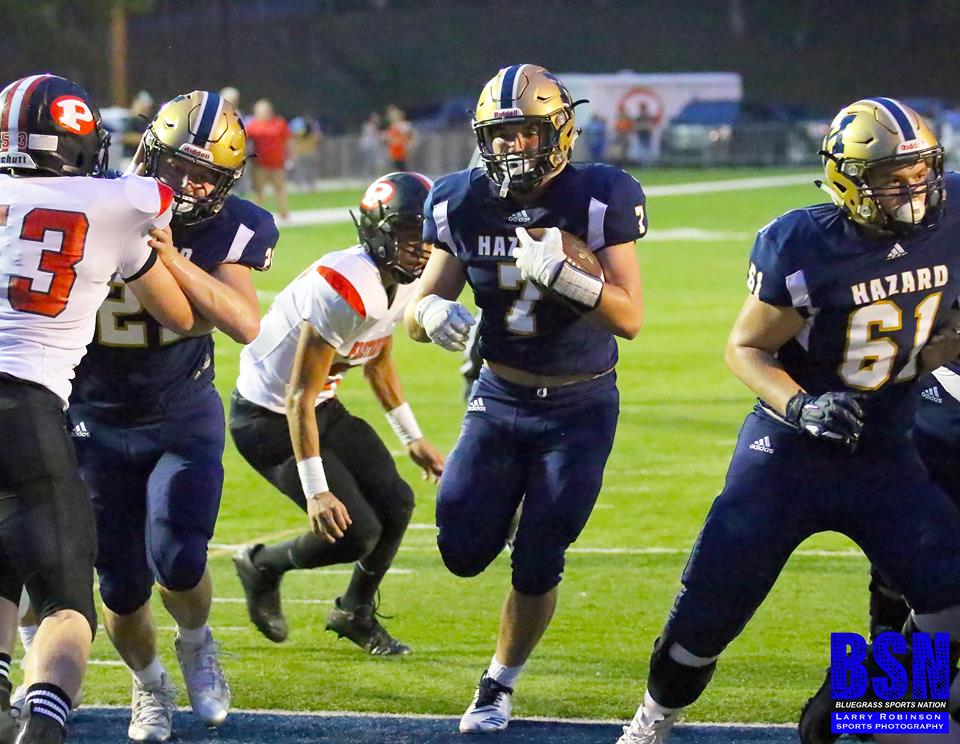 After their first loss of the year at the hands of the Somerset Briar Jumpers and an open week to fix problems, the Bulldogs were eager to get back on the gridiron Friday night against the Prestonsburg Blackcats. Hazard had used their open week to condition hard and work on special teams and the extra work was apparent early. They started the game playing fast and physical and the work from the previous two weeks showed itself no sooner than the opening kickoff. They flexed their muscle early and the game was never in question for the Dogs after a quick three and out for Prestonsburg that saw them gain negative yardage, a shanked punt by the Blackcats, and a two play scoring drive by the Bulldogs.

After the questionable showing by the Dogs on special teams at the Briar Patch, all eyes were on them on an opening kickoff that saw a physical cover team that blew up blockers and contained return backs for only short gain. The Blackcats were contained on every kickoff and failed to return a ball past their own 40. Also on special teams, the kicking tag team of Jonah Helm and Nick Combs continued their perfect ways by being 6/6 on the night with PATs. They split the duties on the night with each being 3/3. Hazard also returned a kickoff for 60 yards for a touchdown as well. Reece Fletcher took the squib kick to the end zone for the Bulldogs first special teams touchdown of the year.

The Bulldog offense went to work immediately after the defense forced the Blackcats to punt on it’s first possession after a 3 and out. Five different Bulldogs ran the ball on the night for Hazard. They were led by Skylar Pelfrey (111yd) with Reece Fletcher (29yd), Bailey Blair (16yd), Trajon Campbell (16yd), and Andy Baker (14yd) all seeing positive gains. Blair had plenty of time to throw all night behind his line of K. Caudill, Goins, Couch, Beverly, and Strong and only being sacked 1 time. Blair put up his usual solid numbers by going 11/17 with 166 yards passing, 2 touchdowns, and only 1 interception that was on a tipped ball. Hazard was led in receiving by Andy Baker (73yd). Kyle Johnson (47yd), Reece Fletcher (27yd), Zane Deaton (12yd), Skylar Pelfrey (7yd), Smiley Ford (6yd), and Mason Collins (2yd) all brought in passes on the night. Backup QB Garrett Miller completed his first varsity pass of the year, a nice 12 yard ball to freshman Zane Deaton, in the closing seconds of the game as well.

Next week the Bulldogs will be on the road again to face district foe Pikeville. The Panthers will be coming off back to back losses against 3A power Belfry and West Virginia’s Point Pleasant. The Bulldogs will be playing to keep a district title run in place, but more importantly home field through the first 4 games of the playoffs.Where a loss to the Panthers would not be the end of the season for Hazard, it would make a long post season run more difficult by potentially being on the road week 2 and 3 of the playoffs. This is the time of year coaches and players look forward to. Each game starts to mean a little more and the playoff picture is starting to develop. Kickoff for Hazard v. Pikeville is set for 7:30pm on September 28th at the W.C. Hambley Athletic Complex in Pikeville. A Preview of the game will be posted Thursday on Bluegrass Sports Nation.