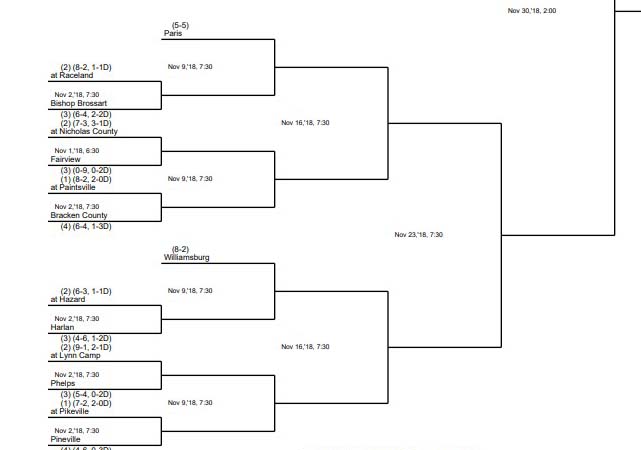 It’s finally football playoff time in Kentucky! It’s the time of the year to filter out the pretenders from the contenders and when 6 senior classes get to go out on top of their high school career! That will be decided over the next 5 weeks as teams from every class in Kentucky’s 6 class system march toward Kroger Field and the KHSAA State Football Finals that will be held November 30th through December 2, 2018. This is the time of year that some of the best football all season will be played. Hazard will begin their journey this Friday night at Daniel Field when they will host the Harlan Green Dragons.

Harlan enters the game sitting at 4-6 and holding the 3 seed in district 7. They are led by head coach John Luttrell who is in his 3rd year leading the Green Dragons. Harlan has wins this season over Middlesboro (44-32), Magoffin County (28-14), Jenkins (70-12), and Pineville (40-6). On paper the Green Dragons don’t jump out at you. When you watch their film, the size and athleticism they posses in the backfield and at receivers immediately grab your attention. Their senior quarterback #5 Will Varner is one of those big athletic kids that stands out. He has thrown for 879 yards this season with 7 touchdowns against 5 interceptions. He throws a very good deep ball and looks as though he was made for his position. His favorite target is #23 senior Caleb Adkins. Adkins has caught 32 passes this year for 454 yards and 3 touchdowns. Harlan’s “do everything” player is senior #2 Kilian Ledford. Ledford is the Green Dragon’s safety on defense as well as their leading rusher (78/636 yards, 8 TDs) and second leading receiver (15/343 yards, 4 TDs) on offense. You can look for Harlan to try and play ball control Friday night to keep the high powered Hazard offense in check. The Green Dragons have picked up over 1600 yards this season on the ground and will have to establish a running game if they are to find any success against the Bulldogs.

As Hazard looks at this game, and what it has to do to extend its season as long as possible, it must look at two things that have been inconsistent this year. The first is special teams play. Special teams cost the Dogs a game at Somerset earlier in the year as the Briar Jumpers ran both a punt and a kickoff back for touchdowns and won 24-10. Since then the Bulldogs have improved both coverage teams and have been consistently pinning teams within their own 20 yard line on kickoffs and have given up very few punt return yards, in the second half of the season. To go far in the playoffs, teams must be really good in all three facets of the game and that includes not only offense and defense, but special teams as well. The second concentration for Hazard is defensive play. Granted, the Bulldogs have been in some battles toward the end of the season and had several starters banged up and resting, but now it has to shore itself up and have no excuses. It’s understandable that they’ve played several freshman on the defensive side of the ball and big plays have happened at times, but now those freshman are essentially sophomores and those seniors now have 4 complete seasons under their belt. With those freshman gaining valuable varsity time this season and the starters beginning to heal up and fill back into the lineup, Hazard should have developed some crucial depth heading into the playoffs. The best Bulldog teams over the past 10 years haven’t been defined by their offensive prowess, but rather by their staunch defenses (though their offenses have been pretty dynamic, too). If Hazard can come together on both the defensive and special teams side of the ball, their offense is going to score enough to keep them in any game.

Below are the defensive stats for the Bulldogs through all 9 of their regular season games: 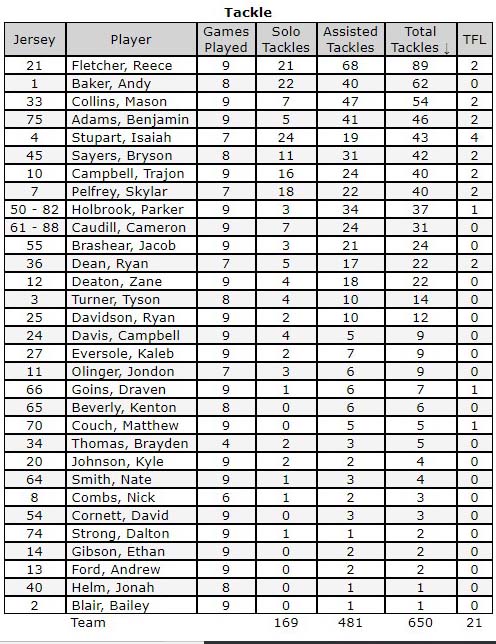 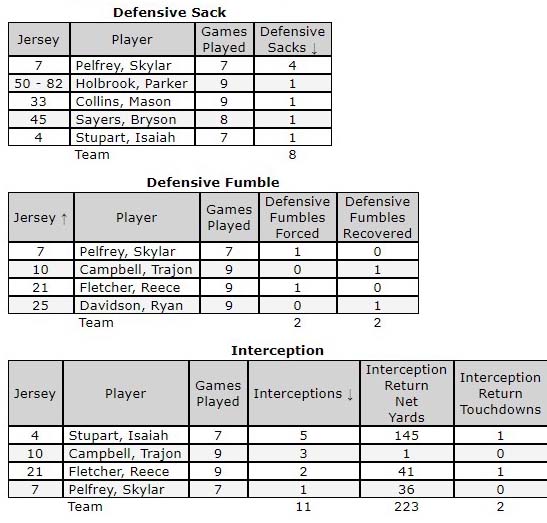 Special Team Stats for the Bulldogs through all 9 of their regular season games: 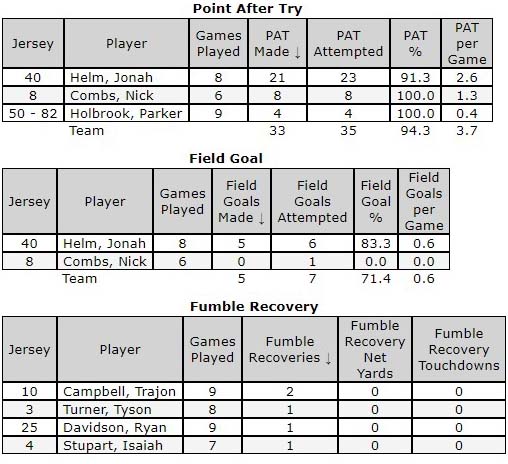 The Bulldog consistency on offense this season has come in the form of many different players. The big men up front have been, for the most part, good. They have allowed Skylar Pelfrey to rush for over 800 yards in 7 games and Bailey Blair to throw for almost 1,500 yards in his 9 games played. This isn’t including the additional 939 yards rushing tacked on by Reece Fletcher (342) and Trajon Campbell (303) from the running back position and Blair (294) from the quarterback position. Those big guys in the trenches rarely get their name in print and usually only their parents, the coaches, and running backs really appreciate who they are. That big offensive line, that averages about 6’, 260 pounds, is led by seniors Kenzie Caudill and Draven Goins. Following their seniors lead is juniors Matthew Couch and Dalton Strong, along with freshman Kenton Beverly. Blair has targeted 8 different receivers this year, as well. Seniors Andy Baker (424), Isaiah Stupart (287), and Kyle Johnson (222) have been the favorite targets with juniors Fletcher (177) and Mason Collins (156) contributing in big plays during crucial situations. In the last few games Andrew Ford (143) has seen his number called more as he has gained the confidence of both the coaches and his QB.

Below are the offensive stats for the Bulldogs through their 9 regular season games: 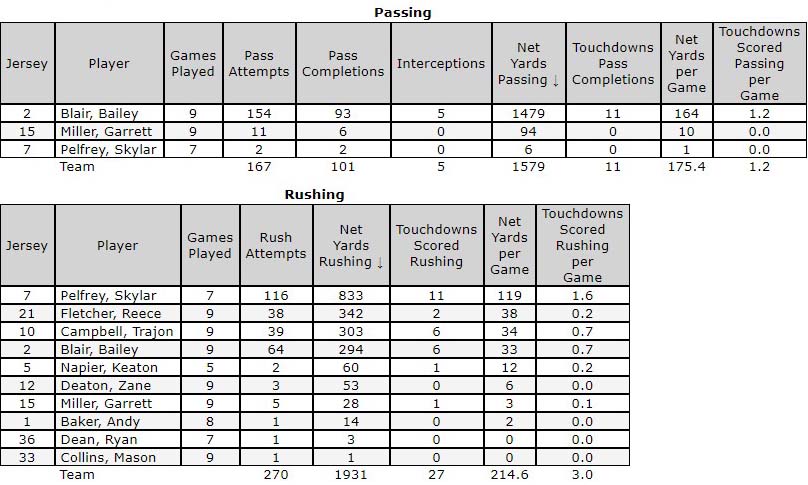 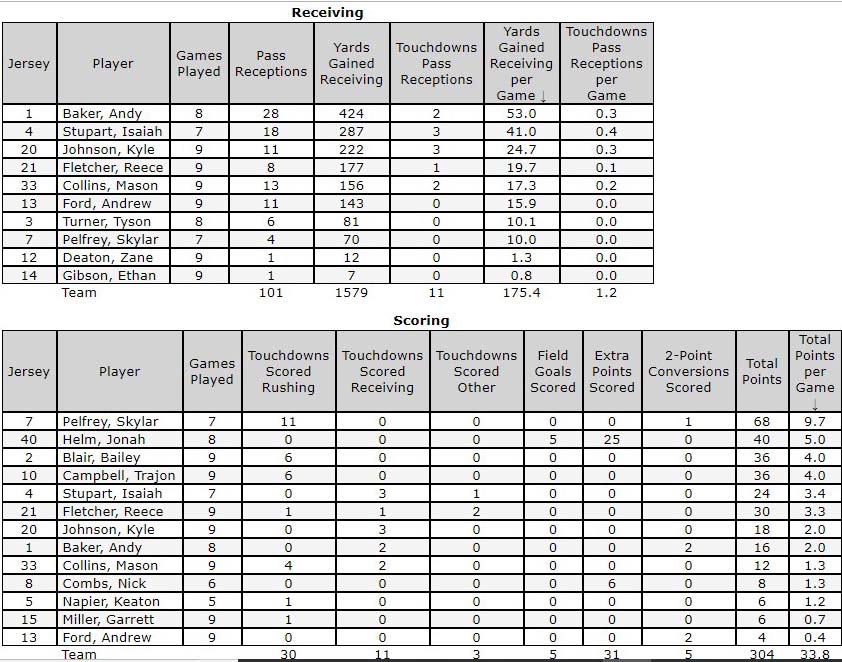 Over Coach Dixon’s 16 seasons as Bulldog’s head coach, he has described the regular season, time and time again, as “practice games.” As of last Friday night the practice games are over. Now the teams that have learned the most from their losses will start to shine. This is also the time of year that seniors start to see the end of their careers come into focus and are picked up by their teammates. After Friday night, over half the teams in the state that play football will be turning in their equipment Monday morning. It’s now win or start playing basketball for Coach Dixon’s Bulldogs, and even though Coach Holland is ready to get started, lets hope the Bulldogs can ride a wave of wins into Kroger Field on Friday, November 30th. Kickoff for Friday night is set for 7:30pm and the game time temperature is predicted at 48 degrees, perfect weather for the Bulldogs to start the post season!