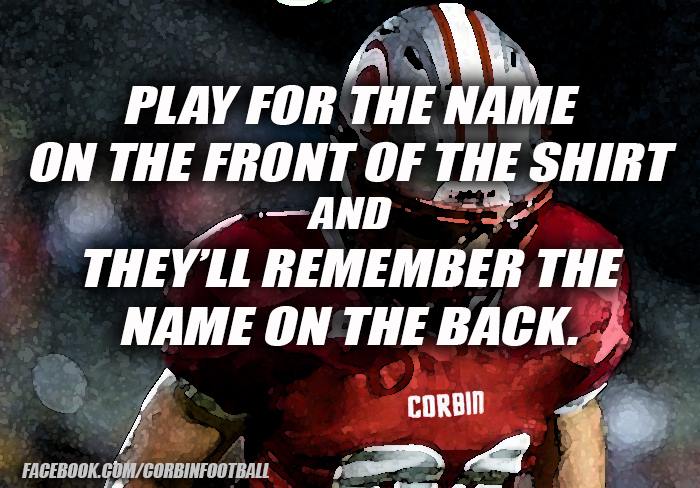 What a year it has been for the Redhounds of Corbin.  One year ago the Redhounds were licking their wounds after a heartbreaking loss at the hands of the Boyle County Rebels in the Class 3A State Finals.  The Redhounds spent the last 364 days grinding in hopes of getting back to tomorrow, the Finals. To get there….they would have to exercise a demon and beat those same Rebels who broke their hearts last season.

Boyle County was riding a 25 game win streak when they made the trip to Corbin last Friday night.  Returning nearly their entire offensive production from a year ago, many believed that Boyle County was on their way back to the State Finals.  The Redhounds were not hearing any of it.  They were salivating at the opportunity to not only end the Rebels streak, but to send Boyle County home, and to punch their own ticket to their 2nd consecutive State Finals.  Corbin did just that and in dominating fashion, beating Boyle by a score of 21-0, the first time Boyle County has been shut out since 2011.

The victory speaks volumes to just how good Haddix’s Redhounds are.  The fact is, the goal in Corbin is to win a state championship.  It doesn’t matter who they have to beat to do it, but beating Boyle was a little sweeter.  That was last week, and Corbin now turns their focus to the Class 3A State Championship game.  Their opponent….the Louisville Central Yellow Jackets.

The one stat that really sticks out when looking at Central is amount of points their defense has allowed this season.  Through 14 games, the Jackets defense has been stingy only allowing 82 points.  They have posted an overall record of 12-2.  In those 12 victories, the Yellow Jackets have held their opponent to 8 points of less.  Seven of those games have been shutouts.  In high school football, that is astonishing.  The Central offense has benefitted scoring 548 points on the season.

These two teams are no stranger to each other having played each other in the 2014 and 2017 playoffs.  The teams split the two games with Corbin winning the latter of the two by 1 point.  Both teams have aspirations of raising the championship and will take the field in the late game on Friday.  Corbin will be representing more than just the city of Corbin.  The entire mountain region will be behind the Redhounds on Friday.  Central has dominated the Mountains in State Finals over the past decade, winning Five (5) Championships from 2007-2012.  All five championships came against Mountain teams. Their last two state title appearances have been defeats at the hands of Belfry.

Coach Justin Haddix of Corbin and Coach Dantzler of Central are each looking for their first state title.  When the clock hits double 0’s one of them will realize that dream.  Haddix knows what it takes to win a state title as he led the 2002 Breathitt Bobcats to a state title as quarterback.  It will take a total team effort for the hounds to bring the title back to Corbin.  The community of Corbin is hungry for a championship.  Should the Redhounds win, the celebration in Corbin may last for months.  Regardless of the outcome, the 2018 Redhounds have left their own foot print on the storied Corbin Program.  The motto for this group has been “Unfinished Business,” they now have a chance to write the final chapter and finish what they started last year.  The Redhounds look poised to do just that.  FINISH!!!