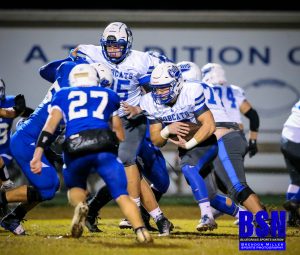 Bell County made the trip from Log Mountain to the River Bank for a huge showdown in the Class 3A High School Football Playoffs.  Both teams dawning royal blue and white, both teams with dreams and aspirations of playing for a regional title.  One team was about to make those dreams a reality and the other was going to put the pads on for the last time.

The game began with both teams feeling each other out.  Both teams 1st offensive possessions stall out deep in their opponents territory.  With these teams being so similar it was only fitting that the score at the end of the first quarter was 0-0.

The Breathitt Bobcats scratched the scoreboard first on a 14-yard touchdown pass from Braxton O’Hara to Jacob Noble in the corner of the end zone.  The play call to throw the ball on 4th and short was nothing short of brilliant.  The extra point was good, and Breathitt drew first blood 7-0 with 11:10 seconds left in the first half.

Bell County answered on their ensuing possession as London Stephanie connected with Jason Jones on a 44-yard dart that slipped through a Breathitt defender’s hands.  Jones made a miraculous catch as he dove for the ball in the end zone.  Coach Hilton decided to go for the lead as he kept the Bell Offense on the field for the point after try.  Bell County converted on the two-point conversion and with 9:08 left in the first half Bell had their first lead 8-7.

Unfortunately for the Breathitt Bobcats, this is the closest the game would get as Bell County took control of the game.  After forcing Breathitt to punt, Bell County’s next possession started deep within their own territory.  On 3rd down, London Stephanie called his own number on a quarterback keeper.  He broke a couple of tackles before bursting down the Breathitt sideline for an 83-yard touchdown.  Bell again converted the 2-point conversion and the Bell County lead was extended 16-7.

Looking for a spark, Coach Moore dug into the playbook when he called a reverse with JT O’hair who eventually threw the ball down field to Brandyn Slaughter for a huge gain.  The play set Breathitt up inside the Bell County 30-yard line.  On the next play, Bell County’s defense forced a fumble ending Breathitt’s scoring threat.

The second half mirrored the first, as Bell controlled the clock and added 2 more scores.  Colby Frazier finished the night rushing for 302 yards and 3 touchdowns on 24 carries.  London Stephanie added 96 yards and a touchdown on 6 carries to lead the Bell County Bobcats to a 40-7 victory on the River Bank.  Bell County finished the game with an astonishing 519 yards of total offense with 475 of those yards coming on the ground.

Breathitt County finished with a respectable 228 yards of total offense. Braxton O’Hara completed 10 of 19 for 123 yards and a touchdown. Jacob Noble was on the receiving end of the touchdown pass.  Tyson Gross and Dalton Manns combined for 69 yards rushing. Breathitt’s season comes to an end with an impressive 8-4 record.

The Bell County Bobcats will be heading to Corbin next week in hopes of avenging their only loss of the season.  In their first meeting with Corbin, the Redhounds upended Bell County by a score of 33-14.  This time there will be a Regional Title, and a spot in the Class 3A semi-finals on the line.  If Bell County plays the way they did on the River Bank, then next week will be an instant classic.

The season may be over for Breathitt County, but this team will be talked about for a very long time.  No one believed Breathitt would have a winning season.  No one believed Breathitt would win their district…..This team made believers out of everybody.  They not only had a winning season, but they won 8 straight games.  They not only won their District, but they went undefeated in district play.  They hosted two playoff games, and won the program’s first playoff game since 2013.  Sure it hurts now, but when the Breathitt Faithful look back on this season they will realize that this team has left it’s mark on such a historic program.  Bluegrass Sports Nation would like to wish the Breathitt County seniors the best of luck in their future endeavors. It has been a pleasure covering your special season.

BSN coverage shifts to the remaining teams of the High School Football Playoffs.  We will be choosing “games of the week,” as we continue to bring you the best coverage in the region.   We also want to thank our sponsors, for none of our coverage would be possible without your support.  As always is you are not able to attend the games, you can stay connected by liking our Facebook page and visiting our website at www.bluegrasssportsnation.com.

Thanks to our sponsors: