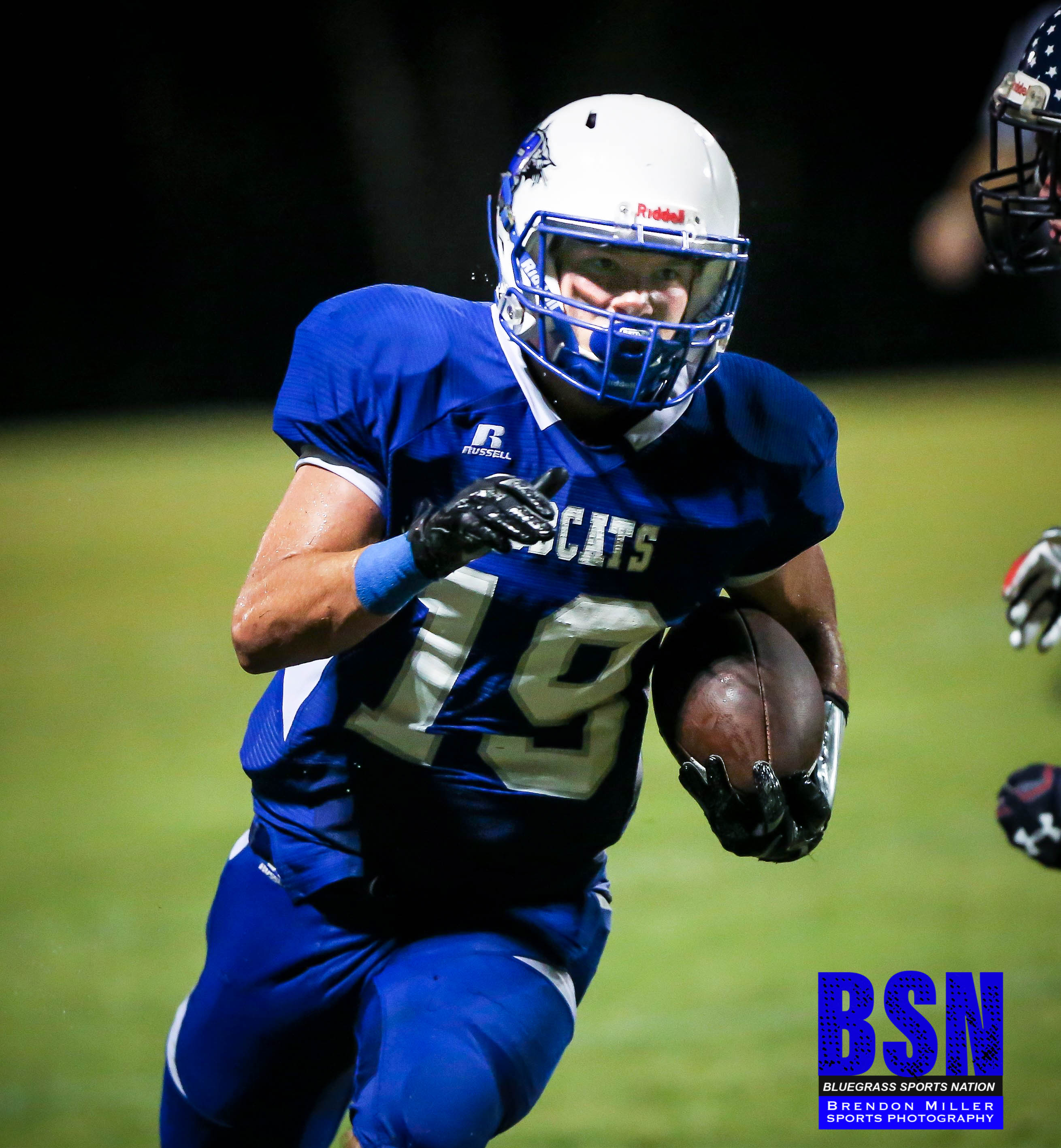 The Pre-District portion of the Breathitt schedule this year was tough.  To begin the season, the Bobcats dropped their first three games, but just as a boxer has to do, the Bobcats kept coming.  The Bobcats have taken the opposing teams’ best punch and have stood their ground.  Week after week, Breathitt continues to improve.  Winners of their last three games the Bobcats are now becoming a team that very few will want to play.

Entering district play, Breathitt had a huge question mark at quarterback as Cameron Stacy is still sidelined with a health issue and Braxton O’Hara was held out due to a concussion. Would Breathitt’s offense become one dimensional?  That question was answered quickly as Breathitt received the opening kickoff.

The Bobcats lined up in the wildcat formation with Tyson Gross taking the snaps.  Breathitt drove the ball deep into Knott County Central territory before stalling out.  It was obvious early that the offense wasn’t in sync.  That changed on the second drive of the game as Dalton Manns took a hand off and sprinted down the sideline toward pay dirt before getting shoved out of bounds at the three-yard line. Tyson Gross then hit the “B” button and performed a spin move that Barry Sanders would be proud of as he hit the endzone.  The score came with 7:07 left in the first quarter and the Bobcats led 6-0.

Knott Central, as Coach Larry Maggard eluded to in the pregame interview, turned to senior running back Ty Hollon for a spark.  Hollon would put the Patriot offense on his back.  After a long run by Hollon that put the Patriots in scoring position, Hollon attempted to put the ball in the air.  Breathitt safety, Jason Noble, made KCC pay for testing the Bobcat secondary when he picked the pass off in the end zone for a touch back.

Breathitt’s offense struggled for much of the 1st half.  Coach Kyle Moore then turned to Donavon Turner. Turner,  who hadn’t played quarterback since his freshman year, would prove that playing quarterback is like riding a bike, it comes back to you fairly quickly.  With 1:37 left in the half, Turner hooked up with Gross on a 25 year touchdown strike down the right sideline.  The two-point conversion was ran in by Dalton Manns, and the score at the half saw the Bobcats ahead of the Patriots 14-0.

After an extended halftime due to the Homecoming festivities, Knott received the kickoff and again, Ty Hollon would lead the Patriots on a long drive into Bobcat territory.  The Bobcat defense again answered the bell and forced the Patriots to punt.  On the ensuing drive, Coach Moore put the ball in Gross’ hands as he took it to the house from 60 yards out.  The conversion failed, and with 7:14 remained in the 3rd quarter, the Bobcat lead was extended to 22-0.

One minute later, Breathitt’s defense forced the third Patriot turnover of the night, and the Bobcats wasted no time in cashing the mistake as Gross again found the end zone on an 11-yard run.  The Bobcats scored 16 points in the 3rd quarter to take complete control of the game 30-0.  Jason Noble would cap off a stellar performance by the Breathitt defense as he would get his third interception of the night and the 4th forced turnover by the Bobcat defense.

The Bobcats continue to play as a team.  When someone goes down its next man up.  Coach Moore, in his postgame interview with Bluegrass Sports Nation, talked about his senior class and the adversity that they have dealt with.  “These kids have handled some adversity. They’ve seen a lot of adversity and they have handled it.  I couldn’t be more proud of a group of guys, that no matter what they are facing, they are going to go out and battle and give you everything they got. It’s exciting to watch and makes you proud to see those guys…. they haven’t just seen adversity this year, the senior class has dealt with adversity for the past 4 years. They have become men and handled it well.”

Senior Tyson Gross had a huge night offensively for the Bobcats as he rushed the ball 23 times for 169 yards and three touchdowns.  Gross added another score as he was on the receiving end of a 25 yard strike from Donavon Turner.  Turner finished the night going 4-9 and a touchdown.  Dalton Manns added 108 yards on 13 attempts.  Breathitt’s Defense was smothering as they held Ty Hollon to only 71 yards.

Outstanding news for the Bobcats as Senior Captain, Cameron Stacy is medically cleared as of this Monday for full contact.  The Senior has been chomping at the bit to be back in shoulder pads. Momentum is on the River Bank as the Bobcats have their goal of a District Title in sight.  Coach Moore has his team taking it day by day, game by game.  “Our team’s goal is to win a District championship. I’ve told them we gotta take it one step at a time, this game was the first step.  We’ve stepped up and a lot of guys have stepped up in some big spots, made some big plays to help us get the win.”

If you can’t make the trip to Estill County, stay connected to all things Breathitt Football right here on Bluegrass Sports Nation, for our extensive coverage of the Bobcats.  BSN brings you pregame interviews of the coaches, pictures and updates during the games, a post-game interview with Coach Moore, and a picture gallery of the best pictures of the game in the business and a post game column and recap.  Visit our website www.bluegrasssportsnation.com and make sure you LIKE our Facebook page to have our coverage of the Bobcats right on your news feed!!!