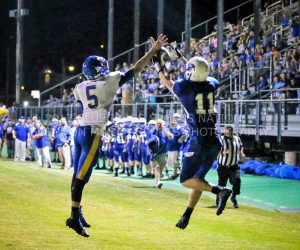 Week 8 saw some teams get back on track, some continued to get hotter and some teams fell back. One team’s dream for an undefeated season was derailed and one team is still fighting to find it’s first win after 8 grueling weeks. As the 2017 season closes in on it’s final game, some of the usual characters are still atop the football world.

BSN Game of the week:
Breathitt (3-5) stayed undefeated in district play with a 54-26 win over Morgan County (3-4). Breathitt seems to have righted the ship after 5 disappointing losses. Getting healthy and also getting in to District play has helped the Bobcats. For a complete recap of the BSN Game of the Week, CLICK HERE

Breathitt will travel to Powell County for a game that should determine the District title as both teams will be 3-0 going in. Breathitt has scored 140 points in their 3 district games after scoring 64 in 5 defeats. Powell has scored 162 in their last 3 including a 71-44 shootout 2 weeks ago with KCC.