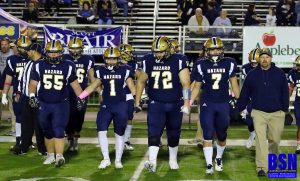 The Hazard Bulldogs’ run to a state title appearance was cut short Friday night when they fell to the Williamsburg Yellow Jackets. Coming into the game both teams seemed evenly matched. In reality they were, to an extent. This game was eerily similar to the 2013 game where Hazard fell to the Yellow Jackets 21-7 in another muddy game that mirrored this one in nearly every aspect. It seemed every time that the Bulldogs were mounting a drive they were the victim of something that would cause the drive to stall. Hazard’s season ends with a 7-4 record and Williamsburg moves on to face Pikeville in the Regional Championship game next Friday night, November 16.

The Yellow Jackets started off fast finding the end zone in less than 4 minutes. The first Hazard drive stalled and Williamsburg blocked the Bulldog punt to set them up for another score on a short field that they took advantage of and went up 13-0 with 5:30 to go in the first quarter. The Yellow Jackets would extend that lead to 20-0 with less than a minute expired in the 2nd quarter in what looked like was going to be a running clock game. Hazard finally got on the board with a 4 yard Skylar Pelfrey run after the Hazard offense marched the ball down the field. Williamsburg responded yet again on the next possession on a 34 yard QB scramble that put the Jackets up 27-7. With the Bulldogs looking as though nothing they could do would work they started their comeback. At the 5:50 mark of the second quarter Hazard’s power run game kicked in and would bring the Bulldogs within striking distance at the half. Bailey Blair ran in an 8 yard touchdown to bring Hazard within 13 with 3:40 left in the second. The Bulldog defense stepped up big on the next Williamsburg possession and Isaiah Stupart pulled in his 6th interception of the year to give the Dogs the ball back. Skylar Pelfrey found the end zone with 30.2 seconds left on the clock before halftime and brought Hazard within 6, at 27-21. The Hazard defense were able to hold the high potent Yellow Jacket offense at bay until the break.

Hazard would get the ball coming out of the half and immediately started another driver toward the end zone, chewing up big yards on every play. That drive was ended by a turnover and Williamsburg made the Bulldogs pay. The Yellow Jackets scored on their next 2 drives to extend their lead 39-21 with 1:22 left in the third. The Bulldogs weren’t finished and Bailey Blair found the end zone on a one yard run to bring the Bulldogs within 12 points at 39-27. Williamsburg scored one more time to set the final score at 45-27.

Blair finished with 1,752 yards, 14 TD’s, and 5 INT’s on the season. He also rushed for 407 yards. Skylar Pelfrey rushed for t 1,023 yards with 13 TD’s and a 113 yard per game average. Isaiah Stupart came on strong at the end of the year and finished with 499 yards receiving and 4 TD’s. Jonah Helm finished 30-33 in PAT’s and going 6/8 in field goals. Nick Combs also finished the season a perfect 8/8 in PAT’s and was a huge asset in the punting game. Reece Fletcher led in tackles with 101, with 2 for losses. Isaiah Stupart hauled in 6 interceptions as well.

This game would be the last game for 11 seniors that finished their careers at Hazard with an impressive 38-13 record with a district title, a regional championship, and a state runner-up. This group of seniors is chocked full of great and smart kids that will end up being great citizens. There are future engineers,orthopedic surgeons, physical therapists, sports scientist, and teachers in this group that will have no problem being as successful in life as they have the gridiron. Hazard will return 10 juniors and 10 seniors for a solid upper class-man group and one of the most talented group of freshman since this senior corp. In just 9 short months a new group of Bulldogs will take the field. See everyone then!