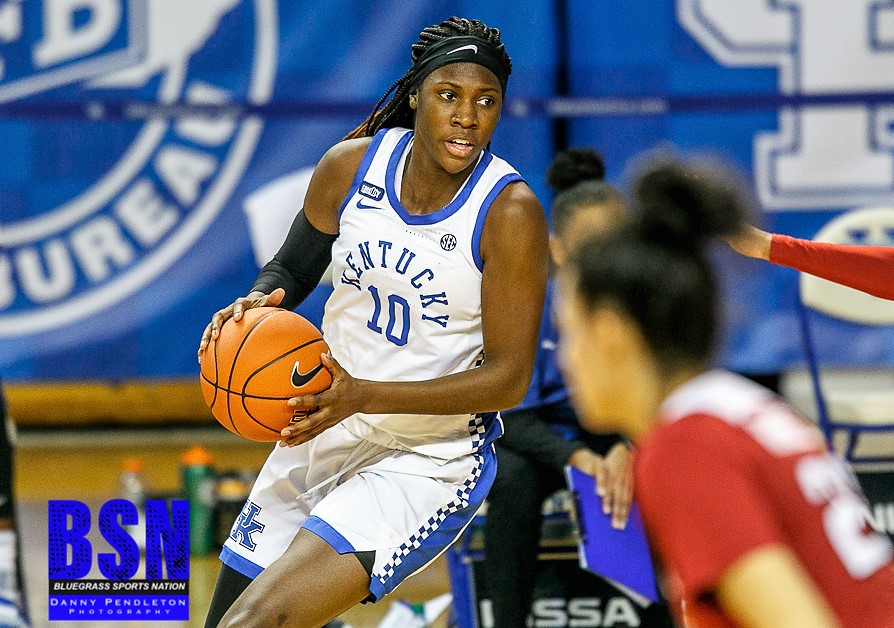 Howard made nine of her 17 shots from the floor, including four of seven from behind the arc, and added two of three from the line for her 24 points. She also had four assists and a blocked shot in the game.

The Cats held Arkansas to a season-low 64 points, well below the 91.2 points per game the Razorbacks were averaging entering Thursday’s game.

Kentucky (8-1, 1-0 SEC) struggled to get its offense going early, largely due to turnovers. The Cats had four turnovers in the first five minutes as Arkansas jumped out to a 10-2 lead with 5:32 left in the first period. But, after a UK timeout, the Cats would score seven in a row, including a pair of baskets by McKinney, to get within one, 10-9, with 3:02 left in the first.

However, the rest of the period belonged to the Razorbacks. Arkansas would outscore Kentucky 8-2 down the stretch, including the final five points of the quarter, to lead 18-11 after 10 minutes of play.

Kentucky would score the first five points of the second period on a three from Benton and a jumper from Green. After Arkansas got a three from Amber Ramirez to make it 21-16, Benton hit another three, getting the Cats within two, 21-19. Kentucky tied the game on a Dre-una Edwards layup, then took the lead when Howard hit a tough shot in the lane, giving the Cats a 23-21 lead with 6:54 left in the half.

After Arkansas’ Chelsea Dungee tied the game at 23 apiece, Howard hit a three from the left side to give Kentucky a 26-23 advantage. However, Arkansas then scored six of the next seven points in the game to grab a 29-27 lead with 2:49 left in the half.

That’s when Howard came up with a huge play. She hit a three pointer from the top of the key and was fouled in the process. The All-American would complete the four-point play to give the Cats a 31-29 lead with 1:44 to play in the half. Arkansas answered with a Ramirez three to lead 32-31, but the Cats got layups from Howard and McKinney to lead 35-32 with 35 seconds left in the half. UK would take a 35-34 lead into the break behind Howard’s 17 first-half points.

In the third quarter, Arkansas scored first to take the lead back, but that was the first of seven lead changes in a see-saw period. Kentucky’s first five points of the quarter were scored by Owens, on two layups and a free throw. The latter gave the Cats a 40-39 lead with 5:23 to play in the period.

After Arkansas tied the game at 40 apiece, UK scored on a Chasity Patterson layup and a Benton three to lead 45-40. But the Razorbacks scored the next six and took the lead on a Dungee three with 2:16 to play in the quarter. The momentum swung back the other direction as UK scored the final five points of the period, on a McKinney three and a Howard runner, to take a 50-46 lead after three periods.

Early in the fourth quarter, Kentucky extended its lead on a three-pointer by Jazmine Massengill and two free throws by Edwards, giving UK a 55-46 lead. Arkansas would answer by scoring eight of the next 12 points, cutting the UK lead to 59-54 on a Dungee three with 4:56 to play.

The Razorbacks would get within three after Dungee made consecutive layups, cutting the UK lead to 61-58 with 3:47 to play. Kentucky countered with a Green jumper, which Arkansas answered just seven seconds later with an Erynn Barnum layup, making it 63-60 Cats with 3:19 to play.

Green then connected on a corner three to stretch the UK lead to 66-60. Arkansas got a pair of Destiny Slocum free throws to cut the lead to 66-62, but the Razorbacks would get no closer as Kentucky scored seven straight on their way to an 11-point win.

Kentucky returns to action on Sunday, visiting Mississippi State in Starkville. Tipoff is set for 1 p.m. ET and the game can be seen on ESPN2.