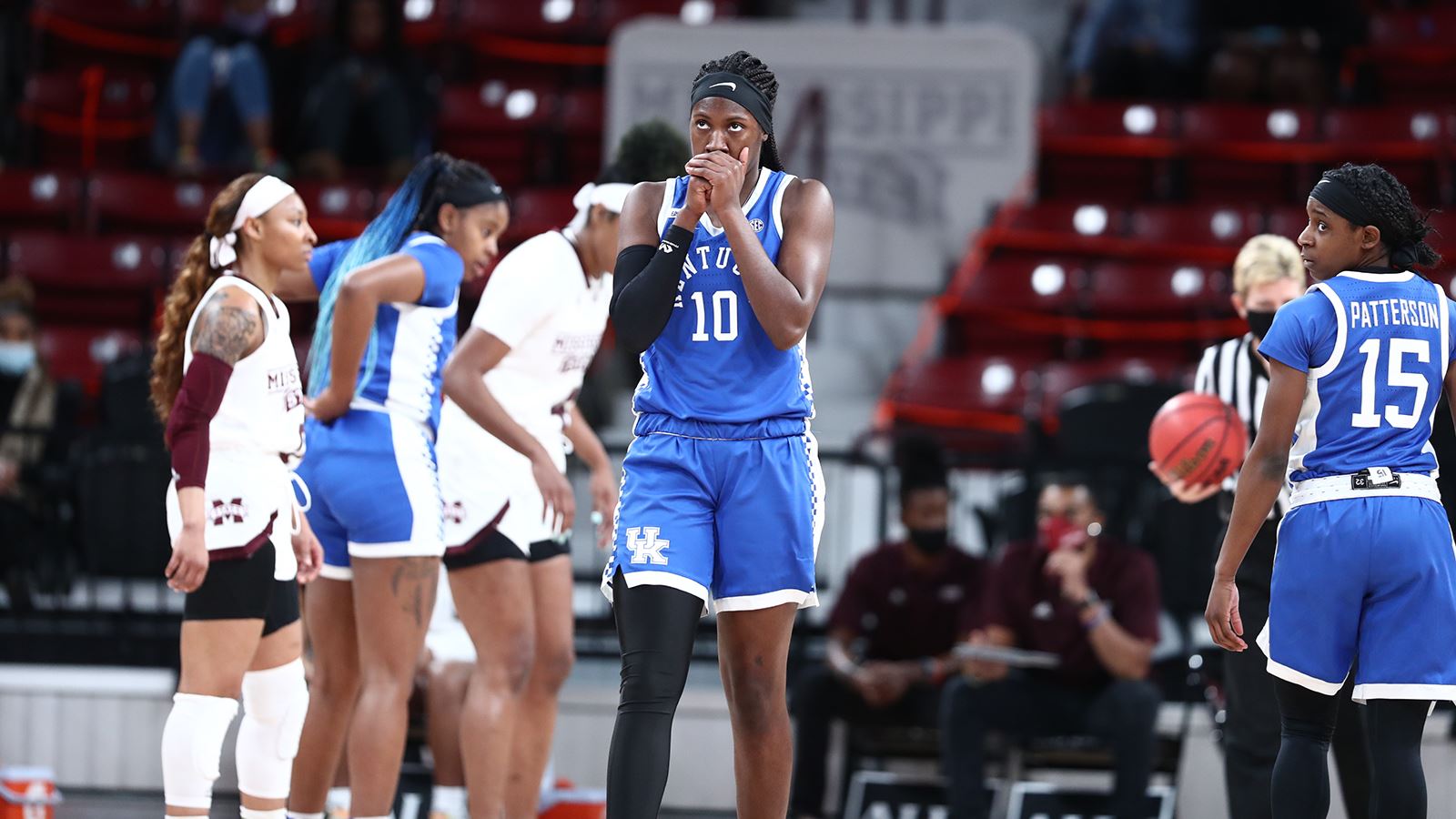 Junior Rhyne Howard scored 33 points, including 25 in the fourth quarter and overtime, as the 13th-ranked Kentucky women’s team topped No. 12 Mississippi State 92-86 on Sunday inside Humphrey Coliseum.

Howard was held to just four points in the first half and had just eight through three quarters before getting it going late. She had 15 points in the fourth quarter as UK fought back to tie the game and send it to overtime. Then, extra time, Howard scored 10 of Kentucky’s 14 points to lead the Cats to victory.

Howard added 10 rebounds and six assists in the game. She was 10 of 19 from the floor in the game, including four of six from behind the arc, and nine of 10 at the free throw line.

Kentucky (9-1, 2-0 SEC) had three other players in double figures in the game. KeKe McKinney and Chasity Patterson each had 11 points and Robyn Benton had 10.

The Wildcats hit 30 of 61 (49.2 percent) from the field in the game, including 14 of 28 from behind the arc. Kentucky won the rebounding battle against a bigger Mississippi State team, 35-34.

Kentucky got on the board first when Dre’una Edwards hit a right-wing three-pointer. The Cats would grab a 5-2 lead after two Howard free throws, but MSU then scored four in a row to lead for the first time, 6-5.

However, Kentucky answered when Benton hit a three from the right corner to give the Cats an 8-6 advantage. After Howard picked up her second foul, MSU would score the next four before Benton struck again, this time from the other corner, giving UK an 11-10 lead with 4:52 left in the first.

Kentucky would stretch the lead to 16-12 on a three from McKinney, but MSU scored the last five points of the period to lead 17-16 after 10 minutes of play.

Early in the second period, the teams traded the lead five times before Kentucky went on a 9-0 run to turn a 24-21 deficit into a 30-24 lead with 4:31 left in the half. MSU would score the next four to cut the UK lead to one, 30-29, but the Cats answered with a Jazmine Massengill free throw and a Blair Green three from the corner to extend the lead to 34-29.

Much like the second quarter, the third quarter started with the lead changing hands several times. With UK leading 43-40, MSU scored four in a row to tie the game before Kentucky got layups from Howard and Patterson to lead 47-43.

Howard would hit another three, this one with 1:32 left, to give the Cats a 78-75 lead. But Mississippi State had a possession with less than a minute to go and Jessika Carter got a layup and was fouled. Her free throw tied the game with 27.5 seconds left.

On Kentucky’s ensuing possession, the Cats were called for a five-second violation while inbounding the ball. MSU took over and had a chance to win, but the Cats came up with the defensive stop to send the game to overtime.

MSU took the lead in overtime on an Aliyah Matharu jumper with 3:52 to play. After MSU extended the lead to 82-78, Howard hit another three to get the Cats within 82-81 with 2:29 to play.

The Bulldogs got the next basket to lead 84-81 before Howard hit a runner to cut the lead to 84-83 with 1:49 to play. Kentucky got a defensive stop and Edwards was fouled. She hit the first free throw but missed the second. However, Howard got the offensive rebound and put it in and was fouled. She converted the three-point play to give the Cats an 87-84 lead with 1:20 to go.

After UK got another defensive stop, Howard was fouled with 28.9 seconds left. The All-American made both free throws to extend the UK lead to 91-86.

MSU missed a long three on its next possession and Edwards rebounded and was fouled with 18.9 seconds left. Edwards missed the first but made the second to make it 92-86 Kentucky.

Kentucky returns to action on Thursday, visiting College Station to take on Texas A&M. Tipoff is set for 8:30 p.m. ET and the game can be seen on the SEC Network.