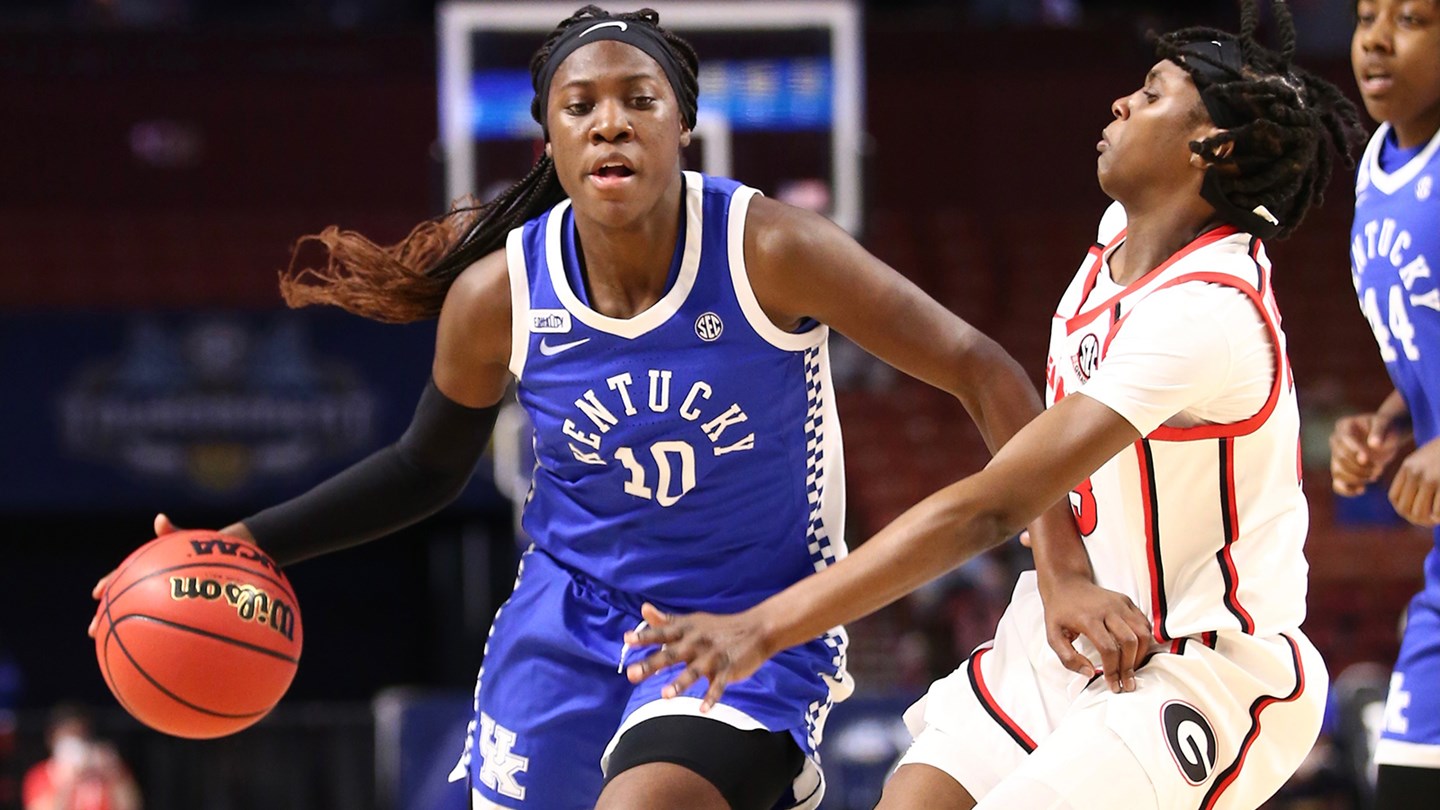 All-American Rhyne Howard scored 17 of her 29 points in the fourth quarter as the Kentucky women’s basketball team topped Auburn 67-55 on Tuesday night at Auburn Arena, snapping a four-game losing skid.

Howard scored 12 points in the first half but did not score in the third period. She made up for that in the final stanza, helping the Cats come back after briefly falling behind. For the game, Howard hit nine of 21 from the floor, including five of 12 from behind the arc. She made all six of her free throws and added nine rebounds, three assists and two steals.

Jazmine Massengill was the only other Cat in double figures, scoring 11. Massengill also had four rebounds and four assists for the Cats.

Kentucky (9-7, 2-4 SEC) was again shorthanded, with just seven players in uniform. The short bench created opportunities and junior Emma King took advantage of hers. The Lincoln County (Ky.) native scored a career-high eight points, a career-high four rebounds and she tied her career high of three assists in the win.

Howard got things going early, hitting her first shot of the game and giving the Cats an early lead. After Auburn tied the game at 2-2, Kentucky got another basket from Howard, followed by a Massengill jumper, to take a 6-2 lead.

Auburn (8-10, 0-7) got a three from Sania Wells to cut the lead to 6-5 but Kentucky answered with a 10-0 run. Massengill started the run with a basket, followed by a Howard three pointer. UK got a free throw from Olivia Owens and two from Nyah Leveretter then a layup from Jada Walker to take a 16-5 lead. The Cats would lead 20-10 after one quarter.

The Cats would extend the lead early in the second quarter when Walker drained a three. But Auburn responded after that. The Tigers mounted an 11-3 run to cut the UK lead to 26-21 with 4:24 to play in the half.

Kentucky would stop the run with a Walker free throw and a Howard layup, extending the lead to 29-21. But the Tigers would score the final two points of the half to cut the UK lead to 29-23 at the break. Howard led all scorers with 12 points in the first 20 minutes.

The third quarter was back and forth between the teams as Auburn tried to chip away at the UK lead. The Tigers got within three, 37-34, but King kept Kentucky in the lead, scoring six straight Wildcats’ points. The last of those gave the Cats a 41-36 advantage with 2:26 left in the quarter. But Auburn scored the final four points of the period to make it 41-40 UK with 10 minutes to play.

In the fourth quarter, UK got a Massengill basket to lead 43-40. But Auburn would tie the game at 43-43 on a Jala Jordan three-pointer. Kentucky would get a Treasure Hunt basket to lead 45-43 but Auburn answered with a Mar’shaun Bostic layup to tie the game at 45 apiece. And, on their next possession, Auburn would take its first lead on a three by Honesty Scott-Grayson.

After an Auburn free throw extended the lead to 49-45, Howard scored her first points of the second half, cutting the lead in half. The Tigers would get a pair of Scott-Grayson free throws before Howard drilled a three-pointer to cut the lead to one, 51-50, with 5:00 to play.

Auburn would extend the lead to three before Howard struck again, with another three, to tie the game at 53 apiece. Then, Kentucky reclaimed the lead on a Walker layup with 3:44 remaining. And, after Kentucky got a stop on the defensive end, Massengill hit a three from the left wing to give the Cats a 58-53 lead. Then, on UK’s next possession, Howard hit another three to extend the lead even more, 61-53, with just 2:30 to play. The Tigers would cut it to 61-55 before Howard made six straight free throws to seal the game.

Kentucky returns to action on Thursday, visiting Vanderbilt at Memorial Gymnasium. Tipoff is set for 8 p.m. ET and the game can be seen on SEC Network Plus.