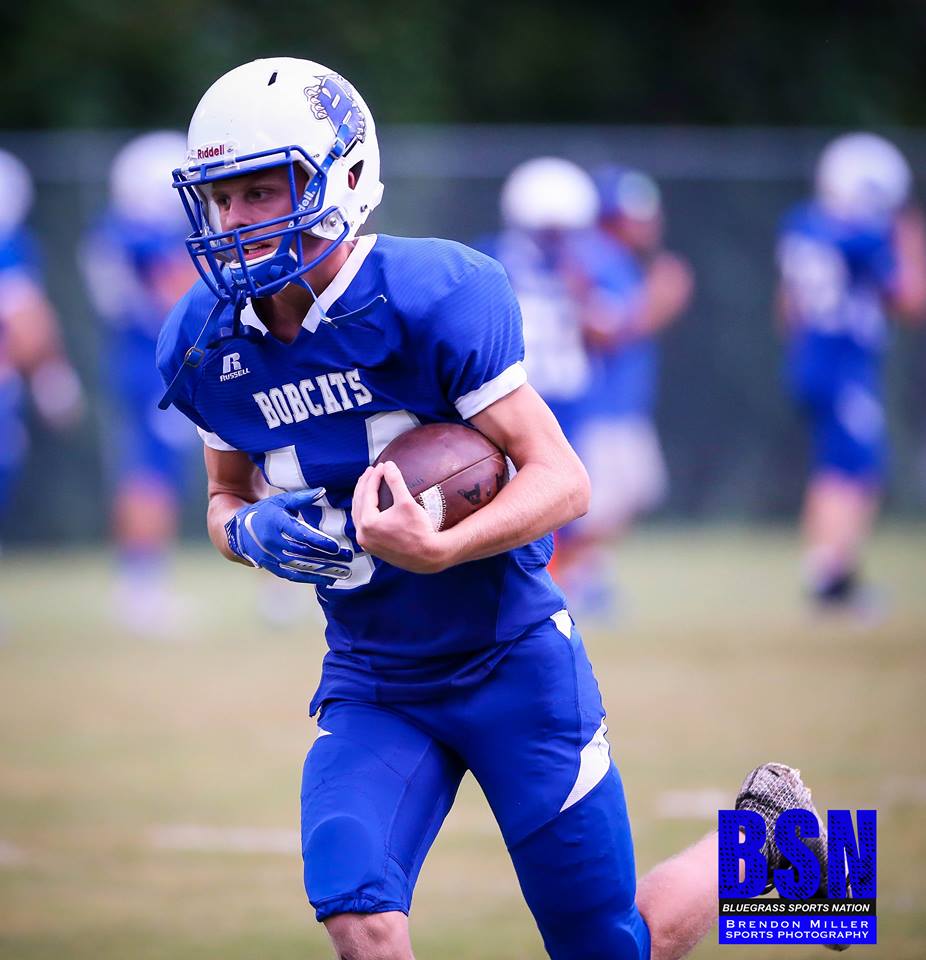 Playoff football isn’t easy. It doesn’t matter if you are a one seed or if you barely made the playoffs.  The fact is, everyone is 0-0 to start the post season and it is win or go home!  Survive and advance, or Lose and Watch.  It would be a lesson that many would learn the hard way on Friday night.

On a night that was bizarre from the beginning, the Bobcats would have to show patience.  McCreary Central’s bus broke down somewhere between Manchester and London, Kentucky, which forced the kickoff that was originally scheduled for 7:30 to be pushed back to 8:30.  An hour doesn’t seem long but when you have been sitting in a locker room since 2 o’clock its an eternity.

In what has become a Breathitt Football tradition, the Bobcats won the coin toss and elected to receive. On the opening drive the Bobcats looked to pick up where they left off as they ran the ball down the Raiders throat.  The Bobcats would scratch the scoreboard first on a Braxton O’Hara run….But In the words of College Gameday’s Lee Corso….”Not So Fast My Friend!”  A ref threw a flag on the Bobcats for holding, taking the score off the board.  Breathitt was unable to convert after the penalty and turned the ball over on downs.

McCreary Central was unable to move the ball on the Bobcat defense as they were forced to punt.  Breathitt again would duplicate their opening drive.  Again, scoring on a short run that was called back due to a hold. The Bobcats drive stalled, and we would go to the half the same way we started. 0 to 0…

The second half was much like the first half, a lot of defense with very little offensive output by both teams.  McCreary Central produced the game’s first big play when their quarterback Chad Nolan was hit as he threw the ball.  Due to being hit, the ball was underthrown and looked to be an easy interception for the Bobcats’ defense.  The Raiders’ wide receiver, Alex Heath, would elevate over a Bobcat defender to secure the catch.  The play kept the drive alive and ultimately catapulted the Raiders into the end-zone for the game’s first “official” score.  The Raiders attempted a two-point conversion but were unsuccessful.

Entering the 4th quarter, the #4 seed looked primed to upset the #1 seeded Bobcats.  The Bobcats, as they have all season, would rise to the challenge.  Breathitt yet again drove deep into Raider territory, and again would be called for holding.  Braxton O’Hara on a 3rd down and long turned a play that appeared to be dead from the start into a first down scamper inside the Raiders’ ten yard line.  With just over 8:30 left in the game, Coach Moore dialed up a trick play.  Jacob Noble who normally catches the ball, came in motion and took a pitch for what appeared to be an end around.  Just as Jacob secured the pitch it looked as if he was going to be tackled for a loss.  Jacob had different plans as he broke the tackle and continued parallel to the line of scrimmage.  Noble would eventually threw the ball into the end zone connecting with Tyson Gross on a 9 yard touchdown pass.  It was the play of the game, and undoubtedly the play of the season for the Bobcats as it kept their season alive.  Coach Moore would call for his special teams to give them the lead as they kicked the extra point.  Breathitt gained their first lead of the game 7-6 with just over 8:30 seconds left in the game.

Breathitt’s defense as it has all season came up huge shutting down the Raider offense, only allowing 121 yards. The Raiders would make one last attempt at the upset as they would drive into Bobcat territory before turning the ball over on downs. Breathitt would put the game on ice running the clock out.

With a stellar Bell County team coming to the River Bank next week, the Bobcats will have to play much better offensively.  Bell County hosted Estill County in round one of the playoffs and at the half was knotted up at 14 apiece.  Second half however was a different story as Bell County would finish the game scoring 61 points.  One thing is for sure, next week should be an awesome atmosphere as Kentucky High School Football is just more fun when Breathitt and Bell are in the mix.  Stay tuned to www.bluegrasssportsnation.com and visit our facebook page daily for all things Breathitt Football. Thanks to our sponsors for supporting our local athletes and making tonight’s coverage possible: