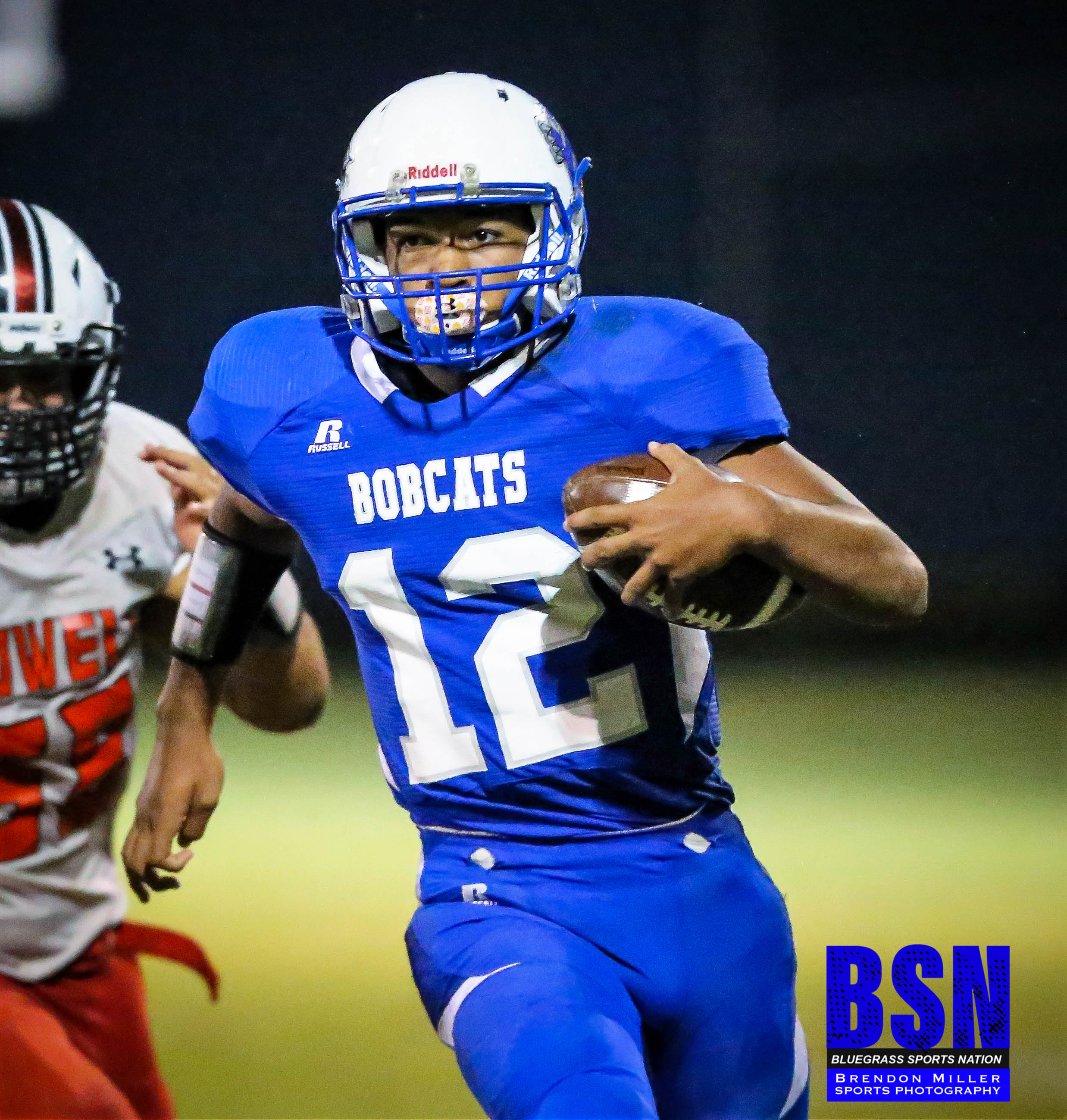 The start of the game would mirror the start of the season.  On their first possession, the Bobcats went backwards as Powell County forced a three and out.  The Pirates would then lean heavily on their stud running back, Nathan Skidmore on their first drive.  On his first rushing attempt, Skidmore broke lose for a 28-yard run, and then two plays later, Skidmore landed the first punch of the game, as he broke the goal line from 1 yard out.  The Pirates jumped on top 7-0.

Unfortunately for the Pirates, Skidmore would suffer an injury on their second possession and had to leave the game for a short period of time.  Breathitt would capitalize on Skidmore’s absence as the Bobcats converted on a 4th down to keep their drive alive.  Two plays later Braxton O’Hara found pay dirt from the 5 yard line.  The extra point was no good and Powell kept a one-point lead 7-6.

Skidmore would not allow the injury to keep him out of this monumental game, and he returned for the Pirates next possession.  Although Skidmore returned, he would be used as a decoy.  The Pirates would fake the hand off to Skidmore and give the ball to Austin Trent who took the counter to the house for a 55 yard touchdown run.  PAT was successful, and the Pirates extended their lead 14-6.

Breathitt would put then ball in the air as Braxton O’Hara found Brandyn Slaughter for a huge gain that set the Bobcats up deep in the Pirates’ red zone.  O’Hara would then again call his own number on a four (4) yard blast up the gut for his second rushing touchdown of the game.  The Conversion was good as O’Hara hit Donavan Turner in the end zone and the score knotted up at 14.

Breathitt’s senior running back, Tyson Gross, had a huge night on the defensive side of the ball. On the ensuing drive, Gross knife in for a tackle for loss that stopped a the Pirate’s drive, and forced Powell to punt for the first time of the night.  Breathitt’s next drive started deep in their own territory. That did not stop the Bocats as Tyson Gross found the open field for a huge gainer.  Skidmore prevented Gross from scoring forcing him to cut back into the pursuit of the Pirates.  Following the gain, Braxton O’Hara would yet again find pay dirt on the ground as he scored from 5 yards out.  The conversion was no good and the Bobcats led 20-14 with 6:48 seconds left in the half.

Powell’s offense proved they were more than just Skidmore on their next possession.  Several different Pirates would touch the ball out of the backfield as Powell moved the ball into the Bobcat side of the field.  With just 1 minute remaining in the half, Powell’s Sophomore Kicker, Bryan Baker, exhibited his exceptional leg connecting on a 40 yard field goal, cutting the Breathitt lead in half. 20-17.

The play of the half, and game changer, would happen with no time on the clock.  As Breathitt attempted to run the clock out, the Pirates would gift Breathitt with an untimed down due to a late hit.  This put the ball on the Powell 35 yard line.  Everyone in the Mike Holcomb Athletic Complex knew what Breathitt was going to do.  O’Hara dropped back to throw and with double coverage on Brandyn Slaughter, he would dial up Jacob Noble’s number in the corner of the end zone.  Noble would make the Pirate defense pay for not double covering him as he caught the pass in stride.  Breathitt extended their lead 26-17.

The second half would see little action from Skidmore.  He ended the night rushing 10 times for 110 yards respectfully.  It was business as usual for the Bobcats as they continued to run the ball efficiently and on this night they were the more physical team.  Braxton O’Hara would finish the night with 4 rushing touchdowns and 137 yards on 24 carries. Tyson Gross had 137 yards and 1 touchdown on 15 carries, and Dalton Manns added 50 yard and 1 score on 5 carries.  Tyson Gross’ contribution, although great offensively, may have been even greater on the defensive side of the ball.  Tyson saved a touchdown on the opening kickoff of the second half, had two tackles for a loss on 3rd down, and consistently forced the quarterback to pitch the ball when the Pirates ran the option.

Gross, along with Ethan “Butter” Moore, and Braxton Eiserman, continued their strong performances, and that type of play is infectious.  The entire defense stood up when it counted. The score board shows 34 points given up, but Powell’s offense was explosive.  Tyler Patrick and Jason Noble put the final nails in the coffin as they both picked the Pirates off late in the 4th quarter ending any thought of a comeback.

The final score read 50-34, but it could have read 10-9 or even 100-0, aS this win is one of the best victories in recent Bobcat history.  It was for the district title and the Bobcats made good on their stated goal of being District Champions!!!  The Bobcats have their first winning season since 2013, and will be the #1 seed from Class 3A, District 7, heading into the playoffs beginning on November 2nd.

THIS IS BAD NEWS FOR THE CLASS OF 3A!!!  Breathitt continues to improve in all aspects of the game.  Every week this team shows they can win in different ways.  One week it may be throwing the ball, the next it may be running the ball, the following week it may be the defense stepping up in a huge way.  One thing is for sure, the state is taking notice.  The Bobcats may have accomplished their season goal of winning a district title but . . . . .  this group of Bobcats are far from done.  The Bobcats with the win secured home field advantage for the first two rounds of the playoffs.  The River Bank will be hopping.

Thanks to our sponsors of Bobcat Football this week:

Take the time to thank them for supporting the Bobcats!!!!