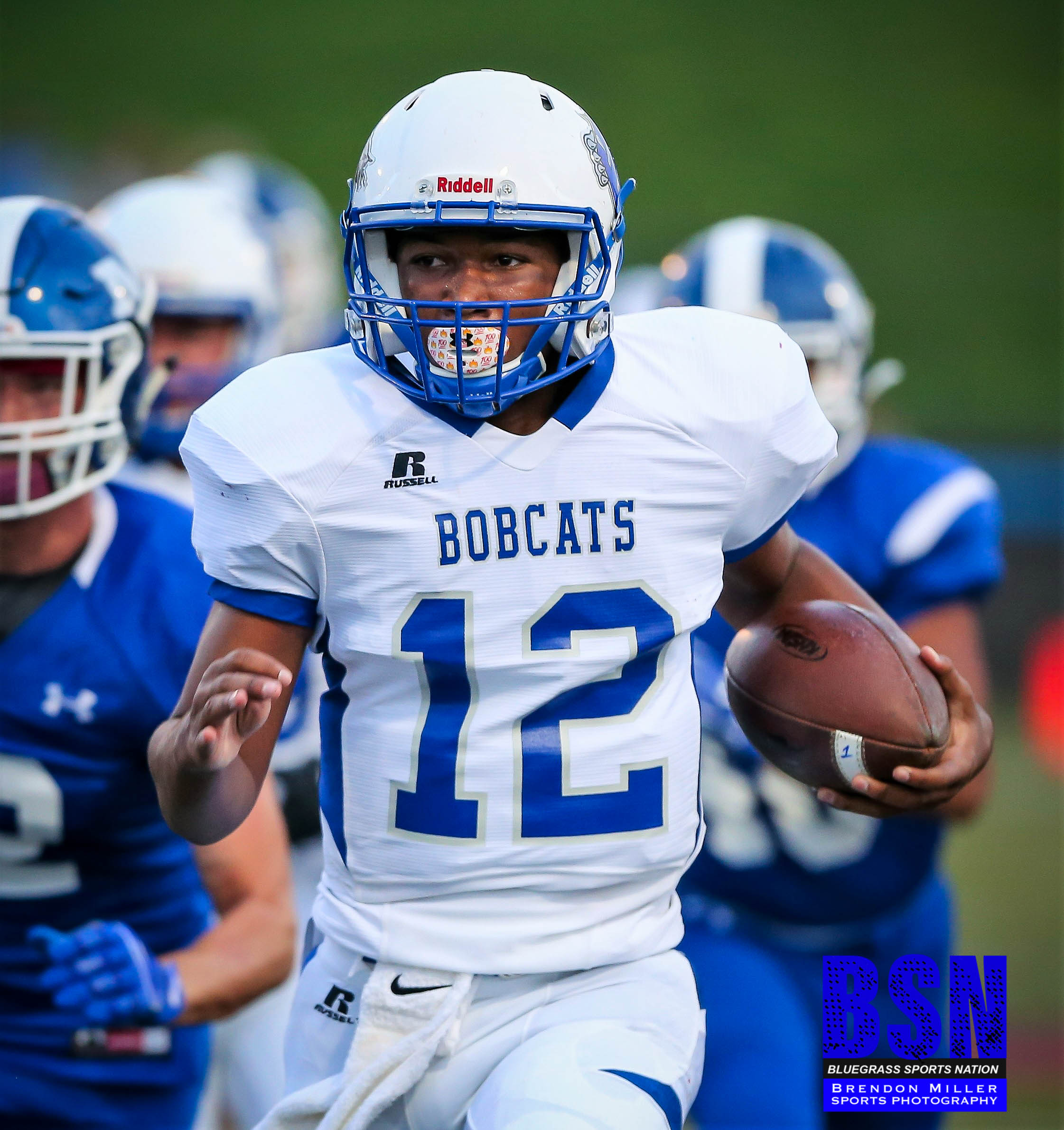 The Breathitt County Bobcats made the trip to Mount Sterling in hopes of avenging last year’s loss to the Montgomery County Indians.  Along the way, as the rain came down, the Bobcats would face their first adversity of the season, and evening, as the new equipment trailer would run over a screw resulting in a flat tire on the Mountain Parkway, resulting in the kickoff being pushed back to 7:45pm.

Once the storm settled and it was time for football, the Bobcats would then face their second adversity of the night, the Montgomery County Indians.  Montgomery is presently a 5A school with enrollment of over 1,300 kids, as compared to Breathitt with just over 500.  Facing the Indians for the second consecutive year was a formidable task going into the game, and proved as much during the game.

The Bobcats kicked to open the game, and the Indians would take the opening drive 50 yards in two plays with an 8 yard touchdown by Justin Korossy.  After the initial punch by the Indians, the Bobcats punched back with an 8 play, 75 yard drive driving the ball down the throat of Montgomery County’s defense.  The drive was capped by a Braxton Ohara run from 16 yards out with O’Hara breaking through multiple tackles for the score.  The extra point was no good.  Montgomery County, 7-6.

On the ensuing drive, Montgomery County again put together several positive plays and drove the 69 yards in 9 plays capped by a 7 yard touchdown run by Quarterback Trey Ishmael.  End of the 1st, Montgomery County 14 – Breathitt 6.  Unfortunately, that would be as close as the Bobcats would get for the balance of the game as Montgomery County opened the game up in the 2nd Quarter.

The 2nd quarter began with two quick strikes by the Indians and their big time College prospect, wide receiver, Pharoah Davis.  On Montgomery’s first play of the quarter, Ishmael hit Davis with a 73 yard score.  The Bobcats then turned the ball over on their own 20, and on the next play, Davis took an end around 20 yards to pay dirt, putting the Indians up 28-6.  The Indians would add two more scores before the half on another 37 yard run by Korossy (following a turnover) and a 1 yard plunge by Josh Wheaton with :09 in the half.  The Bobcats did score get a turnover from the Indians on a mishandled punt and punched in a 13 yard run by Dalton Manns at the 5:00 mark, setting the half time score at 42 -12.

Breathitt moved the ball well on the Indians as they had 112 yards rushing at the half.  The one, two punch in the backfield of Braxton O’Hara and Dalton Manns lead the way.  O’Hara finished the half with 13 carries for 71 yards and a touchdown.  Manns added 4 carries for 28 yards and a touchdown. O’Hara would also connect on 5 passes, for 40 yards.  Brandon Slaughter had one catch for 12 yards, and Tyson Gross has 4 receptions for 28 yards.

After a long halftime, Breathitt would stiffen up defensively, holding Montgomery County to only two scores.  Tyson Gross would add a 9 yard run for a score for the Bobcats on their first play of the 4th quarter.  The final margin was 55-18 in favor of Montgomery County.

The Final Score does not tell the whole story.  Breathitt’s two turnovers gave the Indians the chance to add a little cushion.  The Bobcats were hanging tough with a class 5A school in the 1st Quarter.  In fact, the Bobcats never threw in the towel as they kept battling until the final whistle.

Braxton O’Hara impressed as he showed why he will be a premier dual threat quarterback. Braxton showed his toughness as he lowered his shoulder on several runs and hit the truck stick on would be tacklers.  Braxton was named our Bluegrass Sports Nation Player of the Game and the most outstanding player of the 71st annual Rec Bowl for the Bobcats.  Braxton finish the night going 8-18 for 56 yards through the air, and rushing 15 times for 86 yards and a touchdown.

Following the leadership by the young gunslinger, Dalton Manns rushed for 41 yards on 7 attempts adding a score of his own.  Tyson Gross and LaDaniel Whitaker both rushed 3 times for 20 yards respectfully.  Tyson Gross had 6 catches for 32 yards while both Donavan Turner and Brandon Slaughter both caught 1 pass for 12 yards.

Although the end result wasn’t what the Bobcat faithful was looking for, there is a lot to be excited about.  Adversity builds character, and this team is going to surprise a lot of people this year.  Next week the competition does not get any easier however, as the Bobcats will be heading to Perry County Central, to take on Coach Ovie Canady’s Commodores, who rolled over McCreary Central in their opener of Friday Night.  Kickoff is scheduled for 7:30pm on Friday the 24th.  Stay connected with all things Breathitt Football, and Mountain high school football, by liking the BSN facebook page, and by going to www.bluegrasssportsnation.com.  Hope to see you Friday at Commodore Field.

Special thanks to Stephen Neace for the statistics from the game.