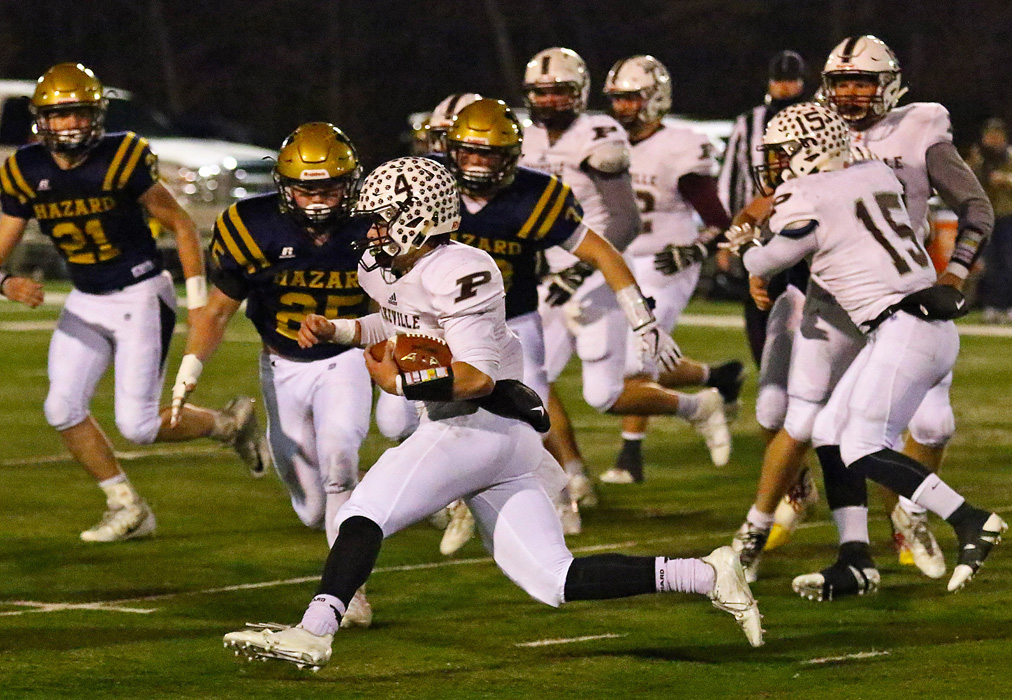 High School Football playoffs continued in week three of the KHSAA playoffs.  Tonight’s Bluegrass Sports Nation game of the week featured the Hazard Bulldogs hosting district rival the Pikeville Panthers.  Tonight’s match-up is a rematch from earlier in the year in which Hazard defeated the Panthers 38- 26 on this very field. Hazard comes into tonight’s game a nine and two record, and District Champions of the Class 1A 8th district.

Pikeville received the ball to start the game.  Pikeville controlled the ball for the majority of the quarter, converting on several fourth downs.  Pikeville marches the ball down the field and advanced the ball deep into Hazard territory.  On three separate plays Pikeville faced a fourth and short converting on two of the plays.  With 8:17 remaining in the opening quarter Pikeville #15 Zach Roberts rushes for six yards and picked up the first down, on a fourth and one play.  With 7:04 remaining in the quarter QB #3 Connor Roberts finds #14 Kyle Watkins on a fourteen- yard gain post play.  The play was also a forth down conversion.  The Hazard Bulldog defense steps up with 3:39 remaining in the first quarter as Pikeville again goes for the fourth down conversion.  Pikeville QB # 3 Roberts keeps the ball and scrambled around the pocket, trying to make something happen with his feet.  The Quarter back is stopped just before converting the down, Hazard takes over at the Hazard seventeen yard- line.  Hazard’s first offensive possession of the game started out with two great plays.  QB Bailey Blair finds #1 Andy Baker on a screen pass, picking up fifteen yards.  On the next play QB #3 Blair keeps the ball and rushes for another fifteen yards, and another Bulldog first down.  As great as the Bulldogs drive started they were unable to score in the first quarter, but had the ball in Pikeville territory entering the second quarter.  At the end of the first quarter, neither team had scored with the score remaining Pikeville 0- Hazard 0.

Hazard has the ball to start the second quarter.  On Hazard’s first possession of the quarter, the Bulldogs faced a fourth down at the Pikeville thirty- three- yard line.  The Bulldogs go for the conversion and QB Blair attempts to pass the ball, the pass is over-thrown and Pikeville recovers the ball.  With 10:34 remaining in the game, the crowd witnessed an injured player requiring medical attention and escorted off the field via an ambulance.  Sophomore Offensive line and line backer #54 Cade Slater laid on the filed holding his knee.  Slater was unable to walk and ambulance personnel rushed onto the field to give the young man medical attention.  Slater was escorted via ambulance to the Nearby Hazard ARH hospital, at the time this article was wrote I didn’t hear the condition of the young man. Cade Slater you are in the thoughts and prayers, of every one attending the game.   Once the game resumed, Pikeville is facing a fourth down near the Pikeville thirty- yard line.  Not willing to gamble again, and potentially give Hazard excellent field position punts the ball.  Hazard next offensive possession Hazard moves the ball down the field and scores on a twenty- four- yard field goal.  Hazard had several big plays in the possession allowing the Bulldogs to score.  RB #21 Reece Fletcher rushes for a fourteen- yard gain putting the ball at the Pikeville thirty- six-yard line.  #12 Mathew Francis has a good run picking up another fourteen yards, on the next play also another first down.  Bailey Blair the QB keeps the ball picking up an eleven yard gain before being brought down, putting the ball at the Pikeville eleven- yard line.  Hazard is stopped on third down later in the drive.  Hazard’s #32 Tyler Collins kicks the Field goal, giving the Bulldogs the lead.  5:14 remains in the second half, Hazard 3- Pikeville 0.  Hazard has the momentum, but doesn’t last long as Pikeville has their best offensive possession of the quarter.   #3 Connor Roberts makes several big plays with his arm to set the Panthers up in excellent field position.  Roberts finds #15 Zack Roberts for a fifteen- yard gain, and later finds Jackson Hensley #1 for a thirty- yard passing play.  Roberts play was frustrating the Bulldog defenders, and tempers flared on both sides of the ball, with several players getting into on the field scuffles.  Roberts works his magic again finding #14 Christian Billiter for a thirty- yard gain, ball at the Hazard two- yard- line, with 2:00 remaining in the quarter.  Connor Roberts keeps the ball for the Quarter back sneak and scores on the next possession for a two- yard rushing Touchdown.  The kick is good, and Pikeville takes a 7-3 lead over Hazard.  On Hazard’s next possession Bailey Blair throws an interception into the Pikeville end- zone, ball is picked off by #14 Christian Billiter.  At the half Pikeville leads 7-3 over the Hazard Bulldogs.

Hazard gets the ball to start the second half.  Hazard has a great start to the drive moving the ball through the air and advancing the ball again deep into Pikeville territory.  Hazard is clicking on all cylinders until 8:14 remaining in the third quarter.  The Ball is fumbled at the Pikeville fourteen- yard line, and recovered by Pikeville.  Emotions are running high, and Hazard was getting frustrated who again had a chance at scoring, only to be turned over to the Panthers.  The Bulldog defense tightens up forcing Pikeville into a three and out.  Hazard moved the ball great on the first offensive possession of the quarter, struggled on the second possession.   Penalties also played a roll in Hazard not being able to move the ball down field.  Blair the QB had a fourteen- yard gain, crossing mid field before being brought down at the thirty- nine- yard line of Pikeville.  6:09 remained in the third quarter.  Hazard has little success running the ball against Pikeville and with 2:57 remaining in the quarter punts the ball to Pikeville.  On this possession Hazard is facing a manageable fourth and three, a costly ten- yard penalty eliminates any possibility of Hazard going for the conversion.  Hazard punts the ball to Pikeville.  At the end of the third quarter the score remains Pikeville 7- Hazard 3.

Pikeville has the ball to start the fourth quarter.  Pikeville scores on the opening possession as #3 Roberts finds #2 Seth Pugh in the end zone for a twenty- six -yard Touchdown with 11:25 remaining in the fourth quarter.  Pikeville 14- Hazard 3.  Hazard started to sense the game was slipping away from them, and played risky football.  Hazard throws two interceptions over the next couple of possessions.  Blair throws an interception with 11:09 and 8:21 remaining in the fourth quarter.   Pikeville does not capitalize on the turnovers, giving the Bulldogs opportunities to score, however time was not on the Bulldogs side as each play the clock ticked away.   4:07 remains in the game, hazard has the ball threatening to score.  Blair attempts to pass, only to be intercepted at the Pikeville one- yard line.  Blair’s 4th turnover on the night.  Pikeville marches the ball into Hazard territory at the Hazard forty- three- yard line, facing a fourth down with only 2:01 remaining in the game punts the ball.  Pikeville special teams placed the ball at the Hazard one- yard line.  Hazard does score on the possession as QB #3 Blair finds #1 Andy Baker in the end zone for a forty- five yard passing Touchdown.  Hazard goes for the two- point conversion but were unsuccessful.   45.9 seconds remained in the game Pikeville leads 14-9 over Hazard.  Hazard has no timeouts remaining and the only option the Bulldogs have is go for the onside kick.  Hazard goes for the onside kick and nearly recovers the ball, only to be recovered by Pikeville.  Pikeville took a knee and goes onto to defeat the Bulldogs.  Pikeville 14- Hazard 9.

Hazard’s season is now over finishing out another great year as district Champions with a nine and three record.  Pikeville advances to the semi- finals Class A football being one step closer to winning the Class A State Championship.   Pikeville improves on the season with a record of eight wins and four losses. Pikeville will travel to Ashland, Kentucky to take on the Raceland Rams on Friday, November 24, 2017.   Congratulations to Hazard on a phenomenal season, and good luck to the Pikeville Panthers quest on winning the Class A State Championship.