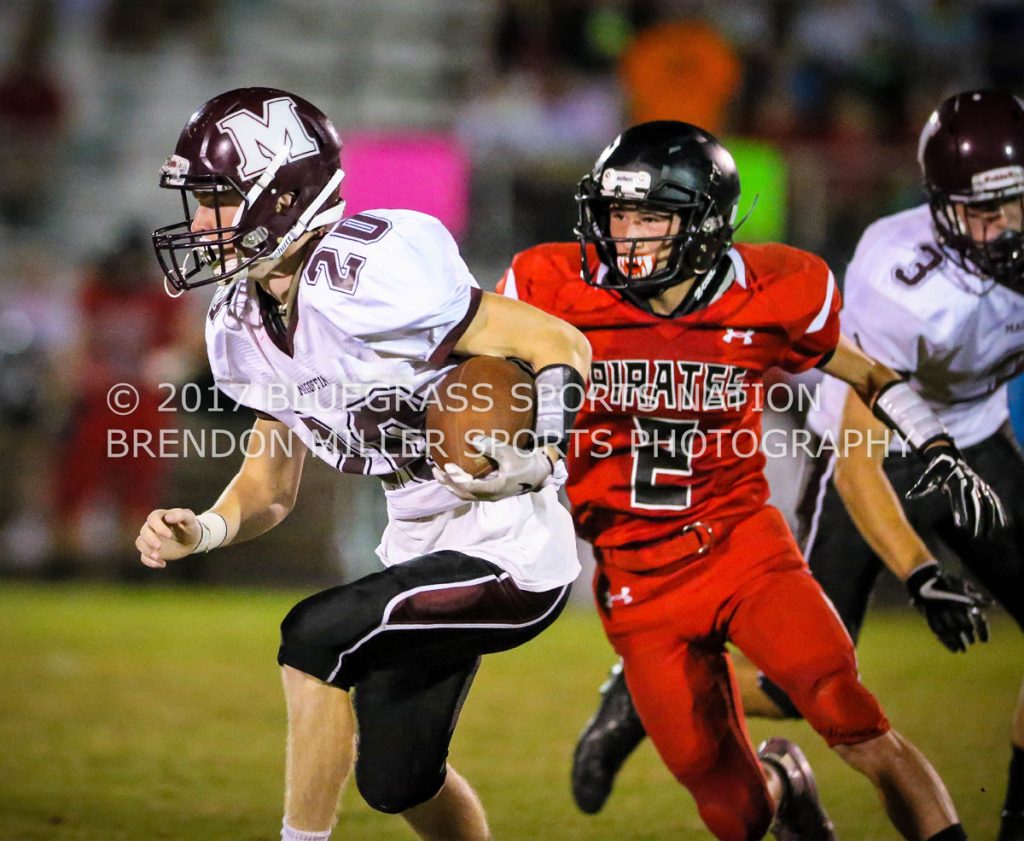 This week’s Bluegrass Sports Nation game of the week featured our first game of the season with district competition on the line.  The Powell County Pirates hosted the Magoffin County Hornets in a battle of district seven competing in Class 3A KHSAA Football.   Powell County entering tonight’s matchup was currently winless in season play.

Magoffin County entered tonight’s matchup with a two win and three loss campaign.  Magoffin County and head coach Justin Combs suffered two large defeats in weeks one and two of the season.  Week one Magoffin County lost by 30 points at home, hosting East Carter.  In week two a common competitor amongst both teams Lawrence County, defeated the Hornets by 41 points.  Magoffin County has improved during the season as it has unfolded with back to back wins in weeks three and four, defeating East Ridge 36- 24 and Betsy lane 18-16.  Last week the Hornets were defeated at home, hosting Harlan Green Dragons 44- 12.  With District play beginning and the teams being seated in the KHSAA playoffs, getting off to a good start is critical to your team’s success.  The seventh district is wide open this year with no team picked as the essential favorite.  A win tonight for either team, could mean the difference in District Champion or last place in the district.

To open the game Magoffin County received the ball.  The Hornets had a strong opening drive as they crossed Mid- field into the thirty- seven yard line of Powell County.  On this series I got to witness Powell County Pirates #15 Nathan Skidmore completely change the tone for the rest of the game.  Skidmore would strip the Magoffin County Hornets Quarterback clean forcing a fumble. Sixty – three yards later, Skidmore crossed into the end zone and scored the games first Touchdown.  Powell County led 7-0 over Magoffin County with 9:38 remaining in the first quarter.   Magoffin now took over the ball and had the Hornets best possession of the half.  Nathan Caldwell # 40 rushed for twenty- seven yards all the way to the Powell County three- yard line. On the next play Quarterback #27 Grayson Lanning used the quarterback keeper to get the Hornets on the score board.  The Hornets attempted the PAT but missed the conversion, the score was now Magoffin County 7- Powell County 6, with 5:55 remaining in the opening quarter.  Nathan Skidmore who earlier in the quarter returned a fumble of sixty- three yards for a defensive touchdown, began showing his versatility by running the ball on the offensive end of the ball. Powell County handed the ball off to Skidmore on several occasions, the dynamic Back picked up several first downs in the opening quarter. Skidmore scored his second touchdown of the night with a four- yard touchdown run 2:32 remained in the opening quarter.  Powell led 14-6, and the play was the last scoring play of the first quarter.

Nathan Skidmore made his presence known again in the second quarter.   Skidmore found the end zone again for a third time with a seven- yard Touchdown run 5:26 remained in the first half.  Powell County was now establishing a comfortable lead being up by more than two touchdowns.  Powell County 21- Magoffin County 6.  Magoffin County is a young, inexperienced team and really couldn’t get any offensive flow to get the Hornets back in the game.  The inexperience really started to show in the second quarter throughout the remaining two quarters of Football.  Although the Hornets are well coached by Justin Combs, The Hornets have many obstacles to overcome in building their program.  The Hornets are also a team devastated with injuries to star players, forcing first year players to step up.  Magoffin County would not score again in the half, and looked out of sync with multiple turnovers and costly mistakes.  Magoffin was struggling late in the first half faced a fourth and fifteen @ the fifty- yard line, and goes for the conversion.  The Quarterback dropped back to pass and throws an interception, picked off by Powell County #2 Dionte Strange.  Strange took the ball back on a forty- four yard return to the Magoffin County sixteen yard line. Skidmore finished the drive with a seven- yard touchdown run, Skidmore’s fourth Touchdown of the night. The Play was the last scoring play of the half, and Powell County led 27-6 over Magoffin County.  Skidmore of Powell County had accounted for every single scoring possession the Pirates had and was the star of the night, showcasing his talents, and versatility.

Powell County would score one more time in the game as #13 Devon Dito scored on a five- yard Touchdown run.  The Pirates would go for the two point conversion and were successful in doing so.  By this point in the game the starters for both teams were now on the sideline, giving the second teams an opportunity to showcase their talents on the Friday Night Lights Stage.  Magoffin County Would score late in the fourth quarter on the last scoring play of the game.    Powell County goes on get their first win of the season, defeating Magoffin County 50-12.

Stats have been provided By Powell County -assistant Coach Rick Riggs, and the official stats come from KHSAA.org At the time this article was written, no stats were available for the Magoffin County Hornets.  My apologies to Magoffin County, but without an official stat line I can’t update the stats.

Powell County improves on the season to 1 and 4.  Magoffin County drops on the season to 2 and 4.  Bluegrass Sports Nation wishes both teams good luck in the remaining games of the season, and it has been a privilege covering your teams.  Magoffin County will continue district play hosting The Morgan County Cougars next week in Salyersville, KY.  Powell County will also be a host next week with District action continuing, Hosting the Knott County Central Patriots.