HS Football – Survive and Advance: Hazard Explodes for 51 Points Against the Green Dragons 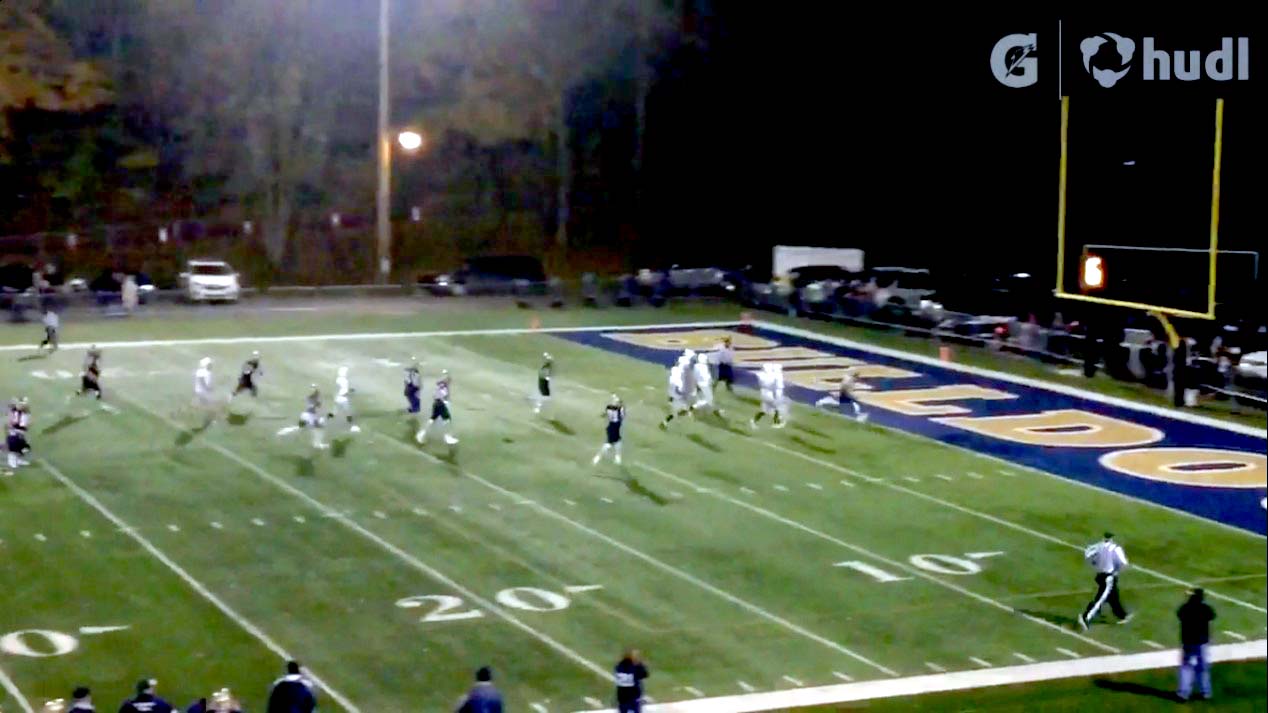 The first round of the KHSAA Commonwealth Gridiron Bowl got underway this week and it saw the Hazard Bulldogs rack up 45 points the first half and 51 points for the game against the Green Dragons of Harlan. After a shaky start on special teams and a great play by a Harlan receiver, the Bulldogs righted the ship and handled the Green Dragons with relative ease. Trajon Campbell had a huge night for the Bulldogs finding 151 yards rushing, 39 yards receiving, and an interception. Bailey Blair also had a great night that saw him gain his most yards on the season through the air with 273 and 3 touchdowns. He also picked up 59 yards on the ground with two touchdowns.

The Bulldogs looked as though they were going to cruise when, on their second possession of the game, Trajon Campbell took the handoff and went 39 yards and a touchdown to put the Bulldogs up 7-0 after the Helm point after try. After a great run, enter the special teams. After a great Helm kick off to the 13 yard line, Harlan’s do all back Kilian Ledford took the ball 87 yards to house to even the game up at 7-7. Harlan then attempted a high pop up kick off and the kick was mishandled by the Hazard receiver, giving the Green Dragons the ball back in great field position. Harlan made the Bulldogs pay quick, as again Ledford caught a 34 yard pass from QB Will Varner to put the Green Dragons up 14-7. Hazard refocused and after a couple of ten yard runs by Campbell and a 10 yard reception by Isaiah Stupart, Blair found the end zone after a 29 yard scamper that brought the Bulldogs back even at 14-14. Hazards defense then showed up on the next Green Dragon possession. After two unsuccessful plays, Reece Fletcher stepped up with an interception and return that covered 24 yards to give Hazard the ball on a short field. Two plays later, Blair found Fletcher for a 5 yard pass in the front of the end zone to bring the score to 21-14. After 35 points, and some special teams fireworks, an eventful first quarter came to an end. The Bulldogs offense didn’t slow down in the second quarter, though. Minutes into the second frame, Blair found the end zone again on the ground to put Hazard up 28-14. The score came after another Blair run that totaled 19 yards and a 28 yard Blair pass to a diving Isaiah Stupart that extended the drive on 2nd a 17. After another great defensive series the Bulldogs lit up the scoreboard again, this time on the foot of Jonah Helm who split the uprights with a 30 yard field goal and a 31-14 lead. The Bulldogs weren’t done in the half. Isaiah Stupart would be on the receiving end of a 49 yard Blair pass that would put Hazard up 38-14. Kyle Johnson also got in on the actions as he pulled in a 61 yard touchdown pass from Blair and the 45-14 lead. The half was finished off with an interception from Campbell that allowed the Bulldogs to attempt a 47 yard Helm field goal that fell just short of the crossbar.

The Bulldogs came out of the halftime locker room to congratulate the 2018 Hazard Hall of Fame class that included Lamar Williams, Steven Sizemore, A.J. Davis, Keith Deaton, William Owens, Joey Lasslo, and Anderson Asher. When the second half started, the Bulldogs defense was on fire. The first play of the half saw a Ben Adams, Cameron Caudill, and Andy Baker tackle for a 3 yard loss. The next play, Bulldog defensive tackle Parker Holbrook dropped the Green Dragon quarterback for a sack. After a Harlan punt, Campbell took the first handoff of the half and streaked 35 yards to set up a Reece Fletcher 20 yard rushing touchdown. This last score would give the Bulldogs the lead, 51-14, and a running clock. Coach Dixon immediately subbed his starters for his junior varsity. The JV would end up finishing the game out.

The Bulldogs offense was exceptional for most of the night, as was the defense, with the exception of one great play by the Harlan receivers. The Bulldogs did give up their first special teams touchdown since Somerset, though. If they can limit mistakes like that, this team has the ability to go deep into the playoffs. That is all on the shoulders of the 11 seniors on this Bulldogs squad. Those seniors were also honored last night for their dedication to the Bulldogs Football Program. Those seniors include Ben Adams, Andy Baker, Bailey Blair, Jacob Brashear, Kenzie Caudill, Joseph JoJo Cornett, Draven Goins, Kyle Johnson, Skylar Pelfrey, Bryson Sayers, and Isaiah Stupart. The Bulldogs will take on the Williamsburg Yellow Jackets next Friday night, November 9 at Williamsburg for round 2 of the KHSAA Commonwealth Gridiron Bowl. Check out the highlights from last nights game below and checkout BluegrassSportsNation.com Thursday night for a preview of the Yellow Jacket v. Bulldog game.