Kentucky at Mississippi State Moved Up to Sunday at 1 p.m. ET 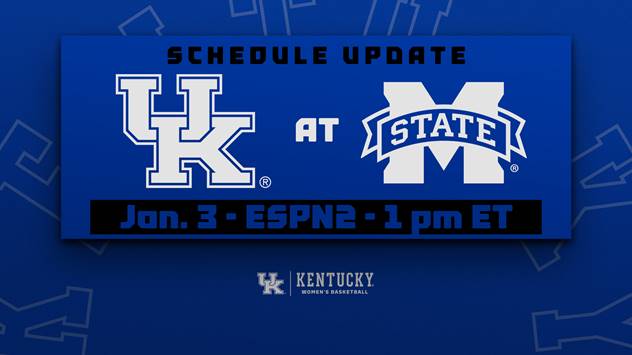 After postponement of UK-UT, SEC moves UK-MSU game up three weeks from Jan. 24

After the postponement of Sunday’s Kentucky-Tennessee women’s basketball game due to the combination of a positive test, contact tracing and quarantining of members of the UT program, the Southeastern Conference has adjusted its schedule and moved up UK’s game at No. 12 Mississippi State – originally scheduled for Jan. 24 – to Sunday at 1 p.m. ET in Starkville, Miss.

The Kentucky and Mississippi State game will air on ESPN2 inside Humphrey Coliseum. Mississippi State was originally scheduled to host Vanderbilt on Sunday, but the game was postponed due to a combination of positive tests, contact tracing and quarantining within the Vanderbilt program.

Kentucky (7-1) is still set to begin SEC play on Thursday vs. No. 10 Arkansas inside Memorial Coliseum. The game will tip at 8:30 p.m. ET on SEC Network.

The reschedule makes the start of conference play even more difficult than it already was for UK as the Wildcats will start league play with back-to-back-to-back-to-back games against the only four teams – besides the Wildcats – that are ranked in this week’s Associated Press Top 25. Following the opener with top-10 Arkansas, UK will travel to No. 12 Mississippi State and then at No. 9 Texas A&M next Thursday before returning home Sunday, Jan. 10 to host No. 5 South Carolina.

If all four teams remain in the top 15 of the AP rankings at the time of each game, it will be the first time in program history that UK has faced four straight AP top-15 ranked teams. UK has faced three straight several times.