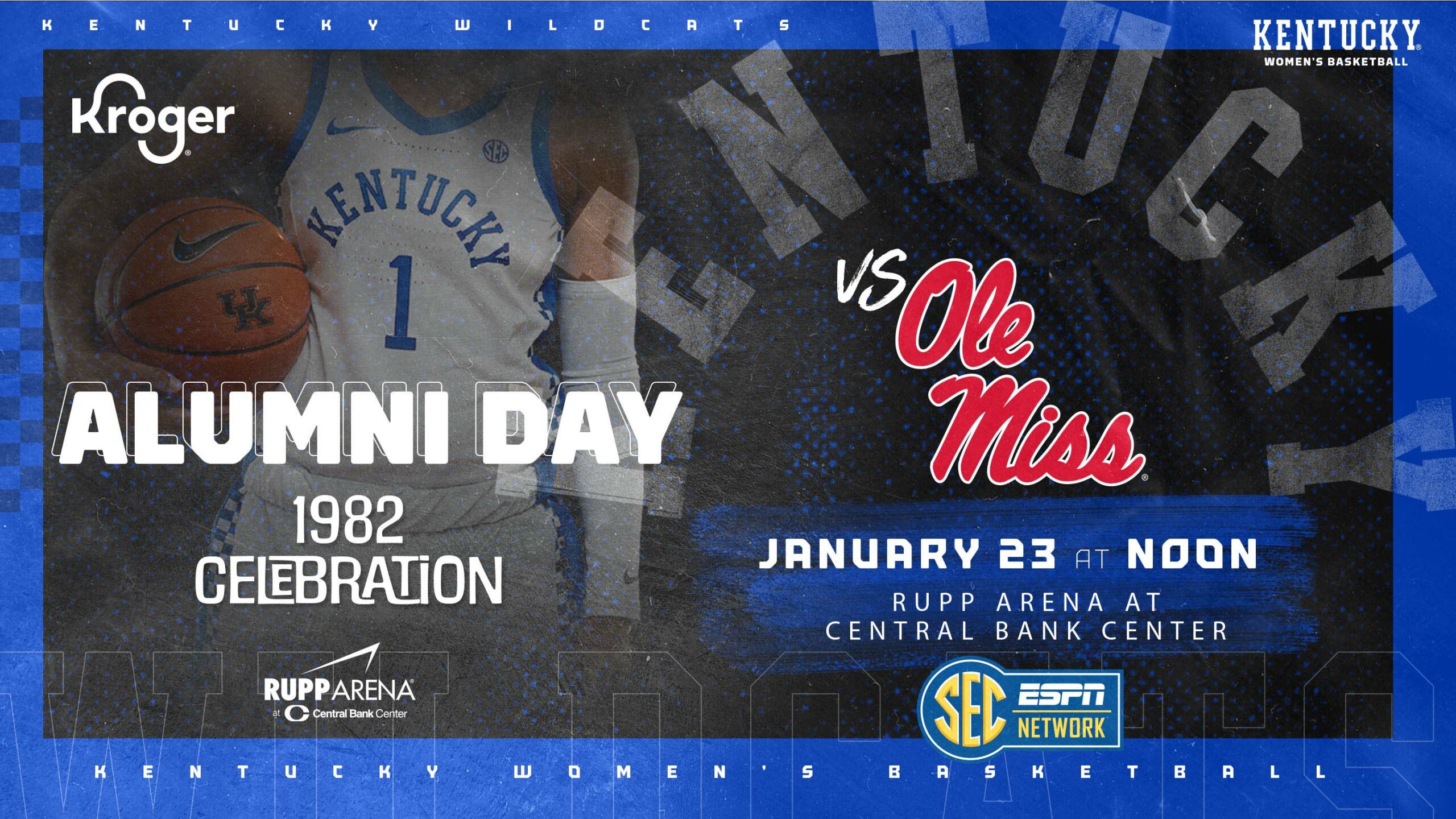 Single-game tickets are available for all Kentucky WBB home games at ukathletics.com/tickets

The University of Kentucky women’s basketball team will look to snap a three-game losing streak Sunday as it hosts Ole Miss at Noon ET inside Rupp Arena.

Sunday is UK’s annual alumnae game as former players have been invited back and will be honored on the court during the game. Specifically Sunday, UK will celebrate the 1982 Southeastern Conference Championship team as several members of the team will be in attendance. The 1982 team won the conference title against Tennessee inside Memorial Coliseum. The team featured some of the best players in program history, including Valerie Still, Patty Jo Hedges, Lea Wise and many others. The team was coached by the late Terry Hall.

Single-game tickets are $10 (all ages) in reserved seating areas, while general admission tickets are $8 for adults and $5 for children (ages 6-18) and seniors (age 65+). Children aged 5 and under do not require a ticket in general admission areas. UK employees receive free admission to the guest along with up to three guests by showing their staff ID at the main entrances. UK students also receive free admission with a valid UKID.

Regardless of vaccination status, all guests will be required to wear a mask while visiting Rupp Arena. Fans will not be required to show proof of vaccination to enter, but face coverings – covering the nose and mouth – are required for all fans as they watch the game from their seat and enter, exit, and move around Rupp Arena. Children 2 and younger will not be required to wear a mask. If spectators are unable to wear masks, they are encouraged not to attend in person for the sake of their health and the health of others.

With a valid state-issued disabled hang tag fans can park in the non-reserved ADA lot located at Gate 1 of Rupp Arena. This lot will operate on a first come, first served bases at a cost of $20/vehicle. Those without parking permits can take advantage of more than 10,000 convenient parking located within a 10-minute walk of Rupp Arena. Visit the Rupp Arena Parking page to learn about additional parking options. Game-day parking is available on a first-come, first-served basis through the Central Bank Center in their West High Street Lots. A parking fee will be in effect for most all Rupp Arena events. For an additional downtown parking information please visit LexPark.org.

Thursday’s game will be broadcast live on SEC Network with Tiffany Greene and Steffi Sorensen on the call. Darren Headrick will have the call on the UK Sports Network (630AM in Lexington). Live stats and free live audio will be available online at UKathletics.com.

Kentucky enters Sunday’s game with a 8-6 record, including a 1-3 mark in league play. The Wildcats have lost three straight games. Senior guard Rhyne Howard leads UK by averaging 19.1 points per game with 6.6 rebounds per game. Howard also has 54 assists, 42 steals and 18 blocks. Freshman guard Jada Walker is averaging 10.6 points per game with 32 assists and 20 steals.

Sunday will be the 45th all-time meeting between Kentucky and Ole Miss in women’s basketball. The Rebels lead the all-time series 25-19 and added to that total with two wins over Kentucky last season. Ole Miss won 72-60 in Oxford and 73-69 in Lexington. The all-time series in games played in Lexington is tied 10-10. Ole Miss has won three of the last four meetings overall in the series. The Rebels has won each of the last two meetings in Lexington. This will be the third time that UK and Ole Miss have met in Rupp Arena. The Rebels hold a 2-1 record in the historic venue vs. UK.

Kentucky owns a 30-20 all-time record in historic Rupp Arena, which is officially now called Rupp Arena at Central Bank Center. UK played its first-ever game in the historic venue in 1977 and played nearly annually in the venue until 1990. Former UK head coach Mickie DeMoss got the team back in Rupp Arena in the early 2000s and played several games a year there before Matthew Mitchell took over and wanted all home games at Memorial Coliseum. Mitchell and the Wildcats returned to Rupp in 2011 and have played at least one game in Rupp Arena every year since. Last season, UK played Alabama and Tennessee in Rupp Arena, which was two of its best performances of the year. UK defeated Alabama 81-68 and Tennessee 71-56. The Wildcats have won five of their last seven games in Rupp Arena. UK played DePaul in Rupp Arena in December, falling to the Blue Demons, 94-85.