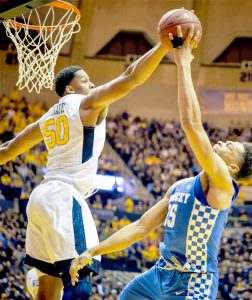 Morgantown, WV- The SEC / BIG 12 Challenge concluded tonight with the Mountaineers hosting the University of Kentucky Wildcats. The game is also part of ESPN’s College Game Day and is featured as the premiere Basketball event of the weekend.  The game features two of the most iconic coaches in modern day basketball.  Coach Calipari is a hall of fame coach for the Wildcats, and WVU Bob Huggins has yet to make to the hall of fame, but is highly respected amongst his peers. Huggins is the third winningest active coach only trailing Coach K of Duke University and Coach Boeheim of Syracuse in active wins.  The only downfall on the legend of Coach Huggins is, his team has yet captured the NCAA championship, other wise coach Huggins would more than likely be in the hall of fame.  This years WVU team is one of the most talented teams in the country, and may provide Huggins best opportunity to win the NCAA Men’s Basketball Championship.  Tonight’s game in Morgantown, WV is the first time UK has played in Morgantown since 1970, and the Mountaineer faithful was amped up with a sold- out crowd to see the two teams play.

Coach Huggins and Coach Cal are friends off the court, but fierce competitors on the court.  Cal And Huggins have known each other since the 1970’s as Coach Huggins was playing for WVU and one of Cal’s classmates Joe Fryze from Moon Township, Pennsylvania was a teammate of Bob Huggins at WVU. The two coaches crossed paths again in 1980 as Calipari worked at a basketball camp hosted by Bob Huggins, at Walsh College in Ohio.  Huggins first had coaching job.  From the camp the two become great friends, and each has followed a path of success that has lead them to where they are now.  In 2002 Huggins suffered a major heart attack in Pittsburg, Pennsylvania and was treated by a paramedic who is a close family member of Calipari.  At the time Huggins was 5-0 coaching against Calipari. Huggins was coaching at Cincinnati Bear Cats and Cal was at the University of Memphis.  The paramedic that treated Huggins, jokingly stated “I can’t let you die, until Calipari beats you at least once.”  Calipari heard about Huggins condition and actually visited him in the hospital.  Huggins has a winning record of 8-3 all-time coaching against Calipari, and last defeated Calipari in Cal’s First year @ UK during the 2009-2010 season.  Kentucky has since defeated WVU and Coach Huggins two times in a row during the 2011, and 2015 NCAA tournament. Calipari recently attended on Friday January, 26,2018 a benefit dinner honoring, Coach Huggins mother who died of Cancer in 2010.

Kentucky enters tonight’s game with a 15-5 record and 5-3 in SEC play.  UK comes off a win on Tuesday, January, 23rd 2018 against the Mississippi State Bulldogs.  The CATS have struggled in the month of January loosing 3 out of five with 2 defeats on the road loosing at Tennessee and at South Carolina.  The CATS were also defeated last Saturday as the CATS come up short hosting the Florida Gators during College Game day.  WVU entered the month of January with only one loss, loosing the opening game of the season against Texas A and M 88-65.  The Mountaineers were on a 13- game win streak giving the Mountaineers a school best #2 ranking in the AP Poll.  WVU enters tonight game with a skid loosing 3 out of the last 4 games and are expected to drop in the polls significantly if the Mountaineers loose tonight’s game against the CATS.   WVU entered tonight’s game with a 16-4 record overall and 5-3 in BIG 12 Conference Play.  UK is currently unranked in either poll the AP, or the Coaches poll.  West Virginia is currently ranked @ #7 in both polls.

Kentucky has played in hostile environments almost every game, tonight’s game at WVU may be the loudest and most challenging of the year.  From the opening tip off, it was apparent WVU players and fan base has looked forward to this game for a long time.  The Arena was loud and you could feel the energy from the crowd.   Although UK gets the tip, the CATS turnover the ball on the first possession.  WVU #2 Carter finishes the play with a one hand dunk, in transition on the other end. Knox would counter on the next play with a three taking a one- point lead 3-2 19:23 remaining in the half, WVU goes on 8-0 run and leads UK 10 with 16:33 remaining in the half.  Turnovers were becoming a problem for the CATS committing 3 turnovers in the first four minutes of the game.  Kentucky begins to make a comeback as Knox Dunks the ball with a strong 2 hand slam and Diallo scores two points with a layup in transition.    12-11 WVU leads with 14:06 left in the half.  The scores remained close on the next couple of possessions as UK relies on Star Freshmen Kevin Knox for scoring.  Although, Knox is having a great game. The CATS as a whole were reckless with the ball, committing multiple turnovers and have 10 turnovers in the first ten minutes of the game. UK only trailed by 3 points with 9:10 remaining in the half.  UK 17- WVU 20.  WVU # 2 Jevon Carter gets hot making multiple shots, that were unanswered by the CATS, the lead grows to 11 points, 31-20 with 5:30 remaining in the first half.  Carter’s impressive play continues as the Star Shooting guard scores two, three- point baskets on back to back possessions.  Carter’s 4th made 3Pt basket of the night, shooting 4-4 from the ARC.  WVU is playing great with heart diving on the court for loose balls, and are quicker getting crucial rebounds.    WVU leads by 17 points and WVU Coliseum was insane, one of the loudest arena’s I’ve ever been to.  The CATS start making shots as Quade Green connects with back to back 3PT FG, cutting the lead to 12 points. WVU 42-30UK, with 1:50 remaining in the half.  WVU makes a miraculous 3 as #3 Bolden connects on an off balance fall away shot, in the closing seconds of the first half.  WVU takes a thirteen – point lead to the locker room, WVU 48- UK35.

The Mountaineers keep the intensity going in the second half, as UK is called for a five second inbounding violation.  The Mountaineers take advantage of the CATS mistake and increase the lead back to 17 pts as #21 Harris scores two points with remaining in the second half.  Kevin Knox who had a superb first half continued his impressive play with 15points, while shooting 5 -9 from the field in the first half. Knox was impressive and Knox continues to light up the scoreboard with multiple three point shots.  Kentucky begins to chip away at the lead, and at the first media timeout, the CATS only trail by 12 points with 12:14 remaining in the half.  The CATS continue to mount a comeback for the ages and the next media timeout only trailing by four points.  UK 52-WVU56. With 13:07 left in the half.  Knox’s star was shining bright and UK has all the momentum, as it appeared the air was taken out of the once ecstatic Building.  Shai Gilgeous- Alexander ties the game @ 56 with a spectacular ten- foot floater in the lane.  After KY stops WVU from scoring the ball on the next possession, Kevin Knocks throws down a one hand dunk in transition, giving the CATS a two-point lead, UK 58- WVU 56.  The lead was UK’s first of the half and second time leading since the opening minutes of the first half.  The Big Blue Nation fans come alive chanting CATS! CATS! CATS! And Go Big Blue.  Up to this point UK has done an excellent job stopping WVU Carter, who torched the CATS in the first half.  WVU calls a quick timeout as Coach Huggins attempts to settle down his team, that was rattled and allowed UK to get back in the game.    WVU regains the lead as Bolden connects on a 3:PT basket, and Miles JR scores on layup giving the Mountaineers a four -point edge 66-62 with7:56 remaining in the game. The Arena is now rocking with excitement with both fan ‘s heavily involved in the game, and trying to urge their team to finish strong. Nick Richards ties the game up @ 66 with two made free throws 6:52 remains in the game.  Down the stretch as the game comes to a close each team rely’s on the stars to make shots.  WVU was going to Jevon Carter and KY’s offense revolved around Kevin Knox.  Carter couldn’t be stopped in the first half, suddenly becomes cold shooting the ball, and struggled to score.  Knox on the other hand was having the best game of his College Career, continued to hustle, rebounding the ball and knocking down shots from all over the court.  Knox’s play leads to a four- point lead 74-70 with 2:29 remaining in the half.  WVU is a gritty team, and continues to fight tying the score at 74, with 1:26 remaining in the Game.  Kentucky didn’t come this far and mount one of the biggest comebacks in program history to fold, and once again Kevin Knox answered the WVU run with a scoring possession.  Knox connects on a 3PT FG with 1:10 remaining in the game.  Knox’s final point of the game, fifth made 3PT Basket of the evening and 34th point scored in tonight’s contest.  The play was a dagger to WVU, who played great defense but was unable to stop the hot shooting Knox. Kentucky is playing with extreme confidence and the team starts to pull away late in the game, and finish the historic comeback.  WVU struggled to score the ball in the final minute, while UK adds to the lead with scoring plays from Wenyen Gabriel, and Nick Richards.  UK goes on to defeat WVU by seven points, UK 83- 76.

Stats- Stats have been provided by WVU athletics

Kentucky completes the Epic Comeback and improves on the season with a 16-5 record overall.  The Comeback is the third largest comeback in program history, and has provided the team with some much needed confidence against one of the top teams and coaches in the country.  UK could have easily lost this game by 20 points, but showed a fight and focus that we haven’t seen from this team.  Kentucky fights back and wins a game, that will improve the CATS seeding in the NCAA tournament.  The Arena was loud with an amped up hostile crowd, but the CATS showed the world not to count out John Calipari and the Kentucky Wildcats.  UK returns to SEC action on Tuesday January 30th, 2018 hosting The Vanderbilt Commodores.  WVU drops on the season to 16- 5 and is on a skid losing four out of the last 5 games.  WVU will drop in the upcoming polls, but are a daunting challenge for any one facing them.  WVU returns to BIG 12 conference play on Tuesday, January 30th traveling to Iowa State, battling the Cyclones.  With the Win by the Kentucky, the SEC Conference wins the SEC/BIG 12 Challenge 6-4