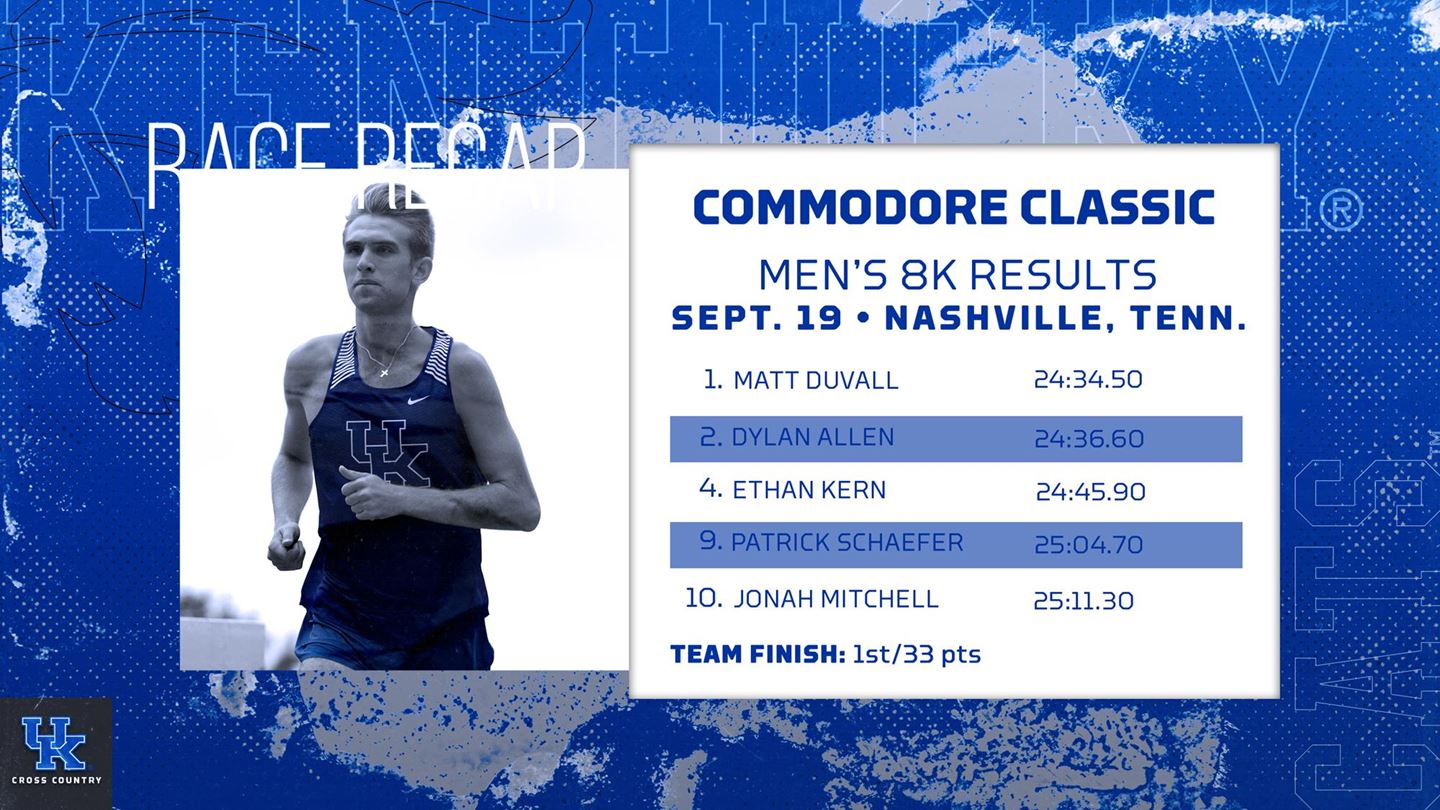 Paced by a pair of newcomers, the Kentucky cross country teams opened the season with a sweep of the Commodore Classic on Saturday morning at Nashville’s Percy Warner Park.

Led by men’s meet winner Matt Duvall and runner-up Dylan Allen, the men began the morning by scoring runners in places 1-2-4-9-10 for a total of 26 points. Likewise, the Wildcat women followed by placing five in the top 10 (5-6-8-9-10) for a total of 38 points.  Five Southeastern Conference teams comprised the meet field, including UK, Alabama, Auburn, Missouri and host Vanderbilt.  The top five runners for each school comprised the team’s point total.

“It’s definitely nice to pick up two team victories,” Assistant Coach Hakon DeVries said. “Obviously it’s early. We want to keep that momentum rolling. We have to keep training hard, but to have some of your hard work validated early on is definitely a good pat on the back. We’re excited to keep moving forward.

“Three or four freshmen on both genders stepping up and being either scoring members, or right outside that five, was great to see. I think it shows what we’ve been trying to build at Kentucky as far as our distance group and cross country program. It definitely shows that the next three or four years are going to be really promising for what we have.”

The Wildcats will be back in action Oct. 3 at the Greater Louisville Classic.

Also competing for the Wildcats were Trevor Warren, Aaron Withrow and Ryan Maynard, who were 13th, 17th and 24th, respectively.

“Obviously it was our first race in a while, and I’m really pleased,” DeVries said. “Just the opportunity to come out here and race is big for those guys. Matt Duvall coming in with the victory, and then Dylan Allen being right behind him, sends a strong statement for how hard they’ve been working over the summer and so far this fall.”

“It’s huge for me to win my first race in this jersey,”  Duvall said. “I’m really honored to represent the University of Kentucky. All the guys on the team are great. When you get along with everyone it makes it that much sweeter. Our team chemistry is amazing. We talked before the race and we all thought we could win. That was our goal coming in. We packed up really well together.

“As a team, we have high goals for the season. We want to finish higher than our No. 6 preseason ranking in the SEC. We have no seniors on our team this year so we’re just hoping to improve all the time.”

The Wildcats posted their first team victory since the 2016 Crimson Classic at Alabama.

Women’s Team Report
Alabama put three runners in the top four, including winner Jami Reed, who ran the 6,000 meters in 20:57.5, but the strong Wildcats overcame the Crimson Tide with a strong team effort for the victory.

“Probably the most impressive thing today was our depth,” DeVries said. “Our runners were all right up there and that’s really important for the future this season. Just to be able to come out and race the first time, get a victory and race together with freshmen coming in is nice to see. It bodes well for the future.”

It was the first team victory for the UK women since the 2019 Bluegrass Invitational.