Kentucky falls to UCLA 97-92 in game between Basketball Bluebloods 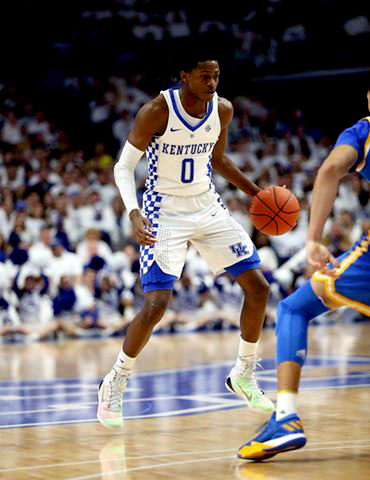 Fox had another good game against the UCLA Bruins, but it just wasn’t enough to lead the Cats to a win at home. (photo by Brendon Miller)

Lexington, KY – Kentucky plays tentative as the UCLA Bruins for a second year in a row upset them as the #1 team in the land.   It was the hot shooting that made the difference for UCLA as they increased on a three-point halftime lead and coasted to a 97-92 victory.  The Bruins shot 53 percent for the game and made big shot after big shot, as the Wildcats could not get enough defensive pressure applied.  The Cats on the other hand looked nothing like the team that blew away Arizona State in the Bahamas’.  This time the young Cats played a step slow and were a little unsure of them selves for most of the game.  Even though they didn’t play well enough to win, the freshmen still led the way for Kentucky.  Malik Monk tried to give Kentucky an incredible comeback story as he scored 15 of his 24 points in the second half, as the Wildcats drew within three points with 8 seconds to go in the game.  De’Aaron Fox had 20 points and Bam Adebayo contributed a double-double with 18 points and 13 rebounds in the loss.  This was the first ever contest at Rupp Arena between Kentucky and UCLA.  In this game you had a match-up, of the two universities’ with the most National Championships (UCLA 11, UK 8) in NCAA tournament history.  Rupp was rocking with half the arena in white and the other in blue; it was easy to tell this was supposed to be one of those special games.   Unfortunately Kentucky got off to a bad start missing their first three field goal attempts while UCLA made two early baskets, which prompted a time-out from UK Coach John Calipari at the 18:40 mark.  Despite the bad start the Wildcats led for most of the first half, but with about two minutes to go in the half the Wildcats started to unravel.  A few bad calls went against the young Cats and they seemed to get frustrated and started to worry about the three fellows in the striped shirts instead of paying attention to other team in blue.  This lack of concentration helped UCLA come back and steal the lead right before halftime.  The Cats trailed going into the break 49-45 after UCLA shot a blistering 58 percent from the field and 50 percent from beyond the three-point line.  Kentucky was led in the first half by De’Aaron Fox who scored 12 points and handed out 3 assists.  Fellow freshmen Malik Monk contributed 9 points and Bam Adebayo had 7 points in the half, while seniors Derek Willis and Dominique Hawkins made big contributions in the first twenty minutes as they both pitched in 5 points.  While the Wildcats led most of the half, UCLA took a lead for good at 44-41 with 2:10 remaining and never looked back.  The Cats shot only 42 percent from the field and a paltry 27 percent from three-point range in the first half.  Kentucky’s loss was the first of the season and snapped a 42 game winning streak at Rupp Arena.  The Wildcats fall to 7-1 on the season.