Kentucky Loses Second Battle of The Bluebloods : North Carolina goes on to defeat the CATS in a game decided on final play. 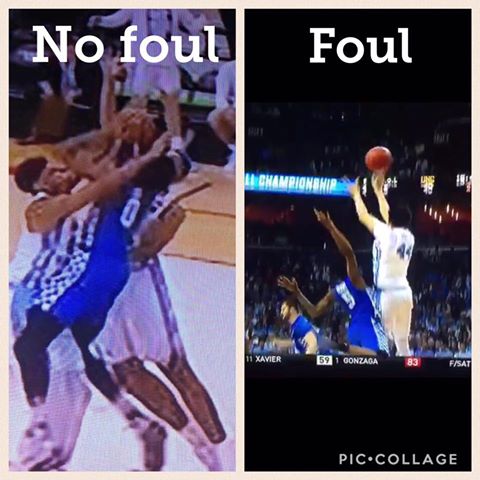 What a foul is according to NCAA Officials – Internet photo

The South Regional Championship game in Memphis, Tennessee featured 2 of the most successful teams in College Basketball history. Kentucky and North Carolina are 2 of the biggest name programs in College Hoops. North Carolina is the #1 seed in the South Region with a record of 30 Wins and 7 losses.  UNC is on a current 3 game win streak.   UNC Entered today’s game against the Cats with a big win over Texas Southern.

UNC had to make a late comeback to defeat another SEC school, the Arkansas Razorbacks, and North Carolina Defeated the Butler Bulldogs on Friday Night. Kentucky was the Number 2 seed in South Region, and the Cats were on a 14 game win streak which is the largest in the country.  Kentucky’s road to the Elite 8 included wins over Northern Kentucky, Wichita State, and UCLA on Friday Night.

Regional Championships have a special meaning for Wildcat fans.  Kentucky has had their share of memories in Regional Championships.  The last second shot by Christian Laettner in 1992 is still talked about to this day and used often by the NCAA, during this time of the year. Another memory that comes to mind is Aaron Harrison hitting the game winner in 2014 Elite 8 against Michigan.  Kentucky has mixed emotions from these games, with the agony of heartbreaking losses and the joy of marching on to the Final Four in a great game. Today’s game had a lot at stake and will be remembered as an epic game. The last 4 minutes of the game will be viewed as one of the greatest stretches in NCAA history. Kentucky had a 5 point lead, only to quickly surrender the lead. North Carolina would then  go by up seven points, with under a minute remaining. Kentucky goes on a big run and ties the game on a made 3 from Malik Monk.  UNC gets off a shot and makes the ball as time nearly expires. March madness was in full swing in Memphis, Tennessee and this game was just that pure MADNESS!  North Carolina would prevail in an instant classic UNC 75, UK 73.

Kentucky started the same lineup as the previous game, the lineup that was on a 14 game win streak.  Bam Adebayo started at center, Derek Willis at forward, Isiah Briscoe at guard, Malik Monk at guard, and De’Aaron Fox at point guard.  North Carolina Started 4 guys who played in last year’s 2016 NCAA Men’s Championship. North Carolina started Kennedy Meeks at center, Theo Pinson at forward, Isiah Hicks at the other forward, Justin Jackson at the guard and Joel Berry at the point guard position.

The game started out with UNC getting the tip and the Heels scoring first basket with Berry making a jumper.  Kentucky would get on the board @ 17:23 remaining in the half, as Fox scored on a floater in the lane.  Fox had a very ineffective first half as he would sit on the bench for the last 8:30 of the half after he picked up a second foul.  Fox was huge in Friday night’s game scoring a career high 39 points. Senior Dominique Hawkins come into the game and was a presence from the time he entered the game. Hawkins scored 10 points in the half, as he repeatedly knocked down 3 point jumpers and found his way to the rim.  Hawkins kept Kentucky in the game. Hawkins contributions were a big blessing for the cats.  At the half Kentucky trailed the Tar heels by 5 points North Carolina 38 Kentucky 33.

The second half started and the game had an atmosphere that was insane.  The game had the feel of a Final 4 / National Championship.  Both teams had runs that excited the fan bases, the game looked out of reach in the end only to be answered quickly by the opposing team.  The game ended with a last second shot that determined the game. In the last 4:32 of the game Kentucky would lead by 5 points. Kentucky fans were ecstatic.  UNC fans were very quiet during this time. North Carolina would mount a comeback and score on 3 unanswered possessions. Suddenly North Carolina had the lead and the emotions from the Kentucky fans went from excited to disappointment. North Carolina would get hot and went from down 5 points to leading by 7 points to with under a minute remaining in the game. The game changed with a 12 point swing, as Kentucky was unable to score.  Kentucky would mount a late comeback due to defensive pressure and Monk and Fox hitting 3 point shots. Kentucky was able to tie the game up as Malik Monk hits a 3 point basket with only a few seconds remaining in the game.  The fans went into pandemonium, both fan bases sensed an overtime.  The next play was a play that was a dagger to the heart of the Wildcats.  No timeout called by either side, Kentucky was on the defensive end and UNC worked the ball around the perimeter.  Luke Maye got the ball and released the shot, making it with only three tenths of a second remaining.  North Carolina now lead by two points 75- 73.  Kentucky had one last desperation shot and Willis inbounded the ball, throws full court baseball pass but goes out of bounds on Kentucky.  North Carolina goes on to defeat the CATS by two points UNC 75, KY 73.  The game is not without controversy as many call went against the CATS.  The calls became momentum killers and costing Kentucky several Baskets.  ESPN analyst Jay Williams even mentioned how unfair the game was called in North Carolina’s Favor.

Kentucky season is now finished, as the Cats fished the season with a record of 32 wins and 6 losses.  Kentucky will face several decisions in the next couple days as the future careers of several players will be in question. Many expect the Cats to lose eight players.  Three seniors are gone regardless Michael Mulder, Derek Willis, and Dominique Hawkins have all took the court for the last time.  Freshmen stars Bam Adebayo, Malik Monk, and De’Aaron Fox are all expected to be first round draft picks and are likely finished collegiately.  Sophomore Isiah Briscoe declared for the draft last year, but choose to return to Lexington after having subpar draft potential.  Briscoe is also believed to leave Lexington as he played his last game tonight. Isaac Humphries has been frustrated with his lack of playing time and many believe he may transfer to another program that would allow more minutes.  A lot will be determined in the next few weeks, but this team will leave a lasting impression on Kentucky fans. The team played in games and created moments that will be talked about for years, as classic Kentucky moments.

Stats for the Game.