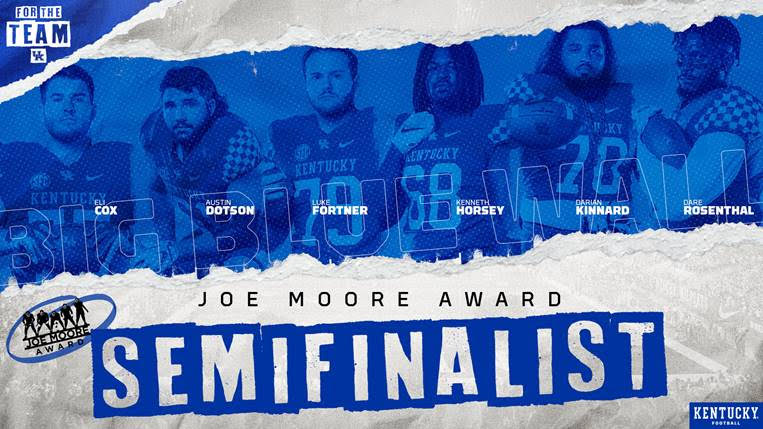 The Kentucky offensive line is one of 13 units named semifinalists for the Joe Moore Award, recognizing the Most Outstanding Offensive Line Unit in college football, it was announced Monday by The Foundation for Teamwork.

This is the third consecutive season that the Kentucky offensive line, known as the “Big Blue Wall,” has been named semifinalists, the fourth time since 2016.

Led by first-year UK offensive line coach Eric Wolford, the Wildcats (8-3) average 5.28 yards per rush, which ranks 16th nationally and fourth in the SEC. Kentucky has a “Gotta Have It” rate of 66.7 percent, converting two thirds of the time when in a 3rd and 3 or less or 4th and 3 or less situation.

UK linemen already have been chosen SEC Offensive Lineman of the Week four times this season and senior Darian Kinnard, who was a two-time semifinalist for the Outland Trophy, is an All-America candidate at right tackle.

What the committee is saying: “I’m in on Kentucky. First play of Vanderbilt and you see it immediately. Body bag games aside, I think they see things through ‘one set of eyes’ [sorting out assignments] really well and are great with run combos. I put on Tennessee and they initially struggled with movement, but from Play 9 on, where the C violently threw the NT down on a screen release, and plays 10 thru 12 which are riddled with pancakes, it started to show back up. I like that they got it sorted out on sideline and got it figured out so quickly. Soft edges in pass pro at times off the edges, but these guys build a wall and pry dudes out. Consistently fly up to the second level with bad intentions. They’re enforcers, not watchers. Losing Cox for the home stretch will be tough, but I think they’ve earned their place based on what we’ve seen so far.”

The Joe Moore Award finalists will be named on Tuesday, December 7. The eventual winner will be recognized in the ensuing weeks during a surprise, on campus visit to the winning unit’s school (TBD as per the winning school’s schedule).

The Joe Moore Award is named after Joe Moore, widely regarded as one of the best offensive line coaches in college football history, most notably for his work at Notre Dame and the University of Pittsburgh. Coach Moore sent 52 players on to the NFL, including Bill Fralic, Mark May, Russ Grimm, Jimbo Covert and others. The Joe Moore Award trophy, crafted by legendary sports sculptor Jerry McKenna, is the largest trophy in college football, standing at a height of 6 feet and weighing in at 800 pounds. The perpetual trophy is made available for display by the winning university until the conclusion of the following college football season.