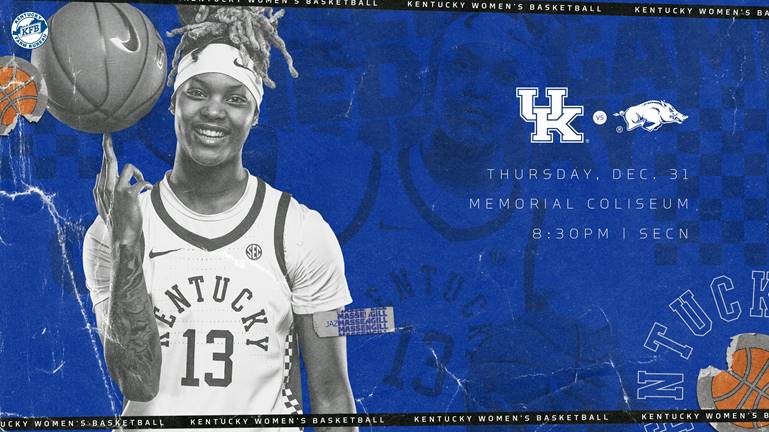 With attendance limited to 15% of normal arena capacity, the majority of tickets have been sold as full-season packages for women’s basketball. General public single-game tickets are available at Ticketmaster.com. Fans are encouraged to check Ticketmaster.com for any ticket allotments that are returned and released closer to game days, as well as for verified resale tickets. Concession stands are reopen at Memorial Coliseum. Doors will open 1 hour prior to tip.

The game vs. Arkansas will be televised on SEC Network with Beth Mowins and Rebecca Lobo on the call. The action can also be seen through WatchESPN on computers, smartphones or tablets. Darren Headrick will have the call on the UK Sports Network on 630AM WLAP in Lexington. Live stats and free live audio will be available online at UKathletics.com.

With the start of conference plays comes one of the most difficult stretches in program history for Kentucky, who will begin league play with back-to-back-to-back-to-back games against top-15 ranked teams. Initially, UK was supposed to travel to Tennessee this weekend but that game was postponed due to COVID-19 issues within the UT program. The SEC rescheduled UK to play at No. 12 Mississippi State on Sunday instead. Next week, UK will travel to No. 9 Texas A&M and host No. 5 South Carolina. If all four teams remain in the top 15 of the AP rankings at the time of each game, it will be the first time in program history that UK has faced four straight AP top-15 ranked teams. UK has faced three straight several times.

This is the 39th all-time meeting between Kentucky and Arkansas in women’s basketball with UK owning a 24-14 record in the all-time series. UK leads the series 15-3 all-time in Lexington. Kentucky’s last home loss to Arkansas came Feb. 13, 2003 when the Razorbacks earned a 70-60 win inside Memorial Coliseum. UK had won 10 in a row against Arkansas until the Razorbacks grabbed a 103-85 win against Kentucky in Fayetteville last season on Feb. 9. That game was the second ever meeting between the two programs with both ranked in the top 25 as Arkansas was 25 and UK was 15. Thursday will be the third and the first with both teams in the top 15. Kentucky is 1-6 against a ranked Arkansas team with the lone win coming Jan. 28, 1996 when the unranked Wildcats defeated the No. 22 Razorbacks 69-65 in Lexington.

Kentucky is 16-22 in SEC openers since 1982-83. This is the second time UK and Arkansas are meeting to start league play. The first meeting was Jan. 6, 2011 which was the first meeting between the two programs with both ranked. The No. 25 Razorbacks earned a 78-67 home win that day over No. 10 Kentucky. Last season, UK fell 99-72 at South Carolina in its league lid-lifter.