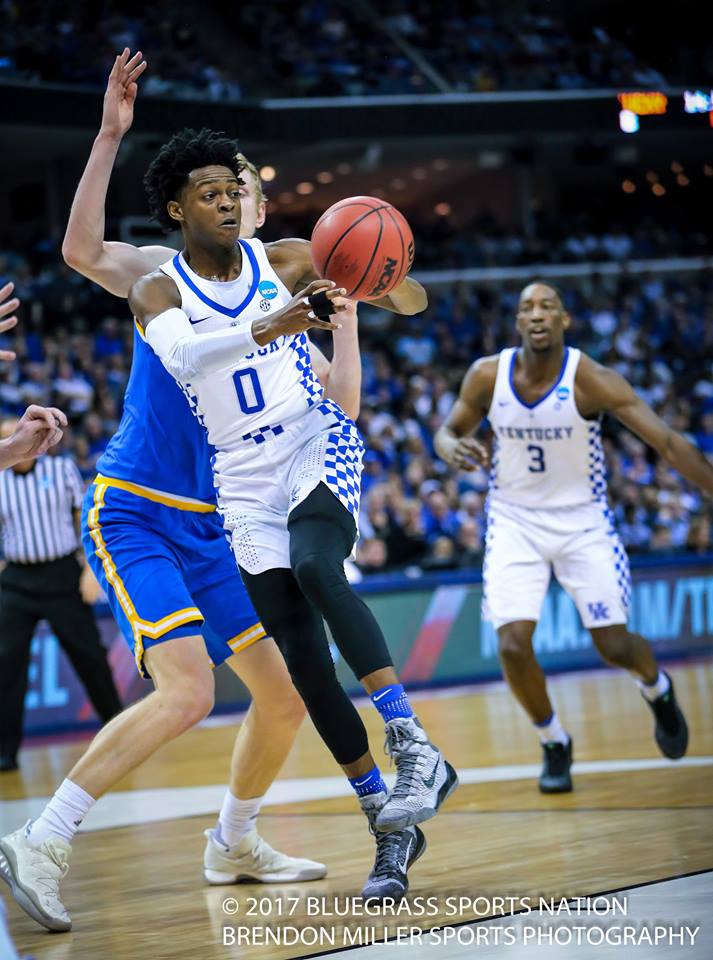 The NCAA South Regional here in Memphis, Tennessee is a who’s who of NCAA tournament championship history.  The top three teams in championships won, are in this region.  UCLA leads the way as the all-time leader with 11, Kentucky is following closely behind with 8 and North Carolina, who is tied at third with 5 championships, make up three-fourths of the South Region field.  Butler University, which is the fourth team, may not hold up to the standards of the other three teams, but the Bulldogs from Butler have been to two Final Fours in the last eight years, so that is not a bad resume either.

For the Wildcats to continue on their march for a ninth championship banner to hang in the rafters of Rupp Arena, they will have to beat a UCLA team that handed them their first loss of the 2016-17 season.  UCLA defeated Kentucky 97-92 on December 3rd, at Rupp Arena.  The home loss which not only knocked UK from the #1 spot in the nation, but it also exposed some defensive liabilities with this Wildcat team.  As we tip off for tonight’s matchup between the Wildcats and Bruins, Coach John Calipari and staff can only hope they have corrected the miscues that cost the Wildcats in the early meeting.

Kentucky scored the first basket of the game, when DeAaron Fox made a short jumper to give the Wildcats an early 2-0 lead.  UCLA countered with a couple of early three-point shots and had a five point lead before you knew it.  Fox continued to keep the Wildcats in the game early on as he was 4 for 4 from the field and Dominique Hawkins came in to give the Wildcats an early boost by hitting two 3-point shots to bring UK back from behind and give them a 17-15 lead.

The game went back-n-forth in the first 20 minutes with an incredible 15 lead changes between the two teams with Kentucky taking a 3-point lead when Fox hit a short jumper right before the half ended to give Kentucky a 36-33 halftime lead.

Fox ended the half with 15 points on 7-12 shooting from the field and going 1-2 from the free throw line.  Malik Monk added seven points and Hawkins finished with six.  Senior Derek Willis was saddled with two early fouls and only played seven minutes, but he was the leading rebounder with four at the intermission.

In the second half both teams started off like a house of fire, the Cats scored 14 points and the Bruins 13 points in the first four minutes of the half to make it 50-46 Wildcats.

The Cats went up by as many nine in the middle of the second half, but they could not put the Bruins away.  Every time it looked like Kentucky could put some distance between them and the Bruins, UCLA would make a 3-point shot.  With seven minutes to go in the game, the Wildcats were holding on to an eight point lead at 66-58.

Down the stretch Kentucky spread the floor and allowed DeAaron Fox to penetrate against the UCLA defense.  Fox was incredible as he either made a basket or was fouled.  When the smoke had cleared Fox had an unbelievable 39 points going 13-20 from the field and 13-15 from the free throw line in leading the Wildcats to an 86-75 win over the Bruins.  Malik Monk also had a big second half scoring 14 of his 21 points in the final 20 minutes.  Seniors Dominique Hawkins and Derek Willis both came up big.  Hawkins always steady made three big 3-point shots and Willis made two 3-pointers as they chipped in 11 and 8 points respectively.

The win moves the Wildcats into the Elite 8, where they will meet the North Carolina Tar Heels for a chance to go to Phoenix and the Final Four.