Kentucky Rallies for a Comeback On Senior Night 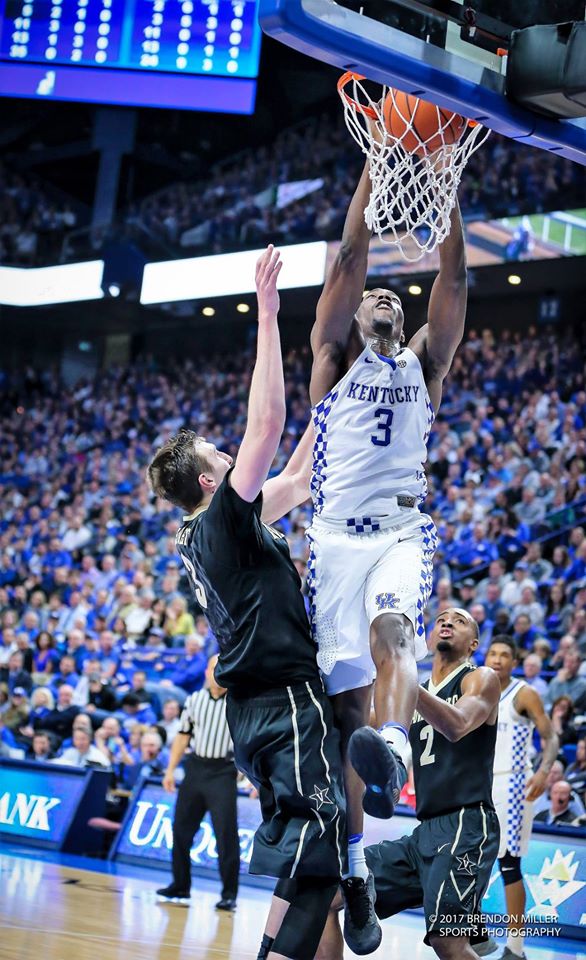 Lexington, KY  Rupp Arena –
Senior Night at the University of Kentucky  is a special night marking the end of the regular season home games for the Kentucky Wildcats.  The University of Kentucky faced off against the Vanderbilt Commodores.  Three seniors have played their final home game, Derrick Willis, Dominique Hawkins and two-year reserve player Michael Mulder.  Hawkins and Willis have had outstanding careers with each player being part of 2 back to back Final Four teams, with 1 appearance in the in the 2014 NCAA Championship.

In 2015 Both players were part of the team that won the first 38 games of the season making the final four, before being defeated by the Wisconsin Badgers in the Final Four.  Michael Mulder has been a key reserve player and has been used as a spark off the bench. Mulder is a good outside shooter and has become a valuable asset to the Cats. The Ceremony before the game was an emotional one that even included a proposal from Derek Willis to his now fiancé.

Blame it on the emotional senior night ceremonies or a hangover from the Florida game, whatever the reason, the beginning 12 minutes of the first half was perhaps the worst start of the year. The Wildcats got behind by 19 points with 8 minutes left in the first half. During that time the Cats shot 2 for 17 (11.7%). While Vanderbilt seemed to do everything they wanted. They were drove past Kentucky for layups and made contested three pointers. Kentucky went on a 4:54 drought until Mychal Mulder hit a three to pull the Cats back within 16. He also made a tremendous dunk to give Kentucky some momentum. Coach John Calipari decided to speed the game up by having Kentucky play full court defense the rest of the half. The tougher defense allowed the Cats to go on a 18-5 run to end the half within 6 points.

The second half played out a lot like the first half. Vandy made their first 6 field goals and pulled back ahead of Kentucky 47-34 with 13:51 left in the game. Once again, the Cats applied full court defensive pressure which made the Commodores turn the ball over and allow a 10 to 1 Wildcat run to tie the game with 7:01 left in the game. The Cats took their first lead of game on a Derek Willis three pointer with 4:47 remaining. Kentucky played tough defense that lead to Vanderbilt shooting 2 for 10 to end the game. The Cats pulled away and won a greatly contested matchup 73-67.

Malik Monk would once again lead all scorers with 27 points, but it was a very fitting night for the seniors making big shots when Kentucky needed it most. Derek Willis hit the three pointer that gave the Cats the first lead and he had 3 blocks that were crucial in the comeback. Mychal Mulder had the first three pointer and a huge dunk that sparked the comeback. Dominique Hawkins played tough on-the-ball defense throughout his 21 minutes of game time.

The Kentucky Wildcats 25-5 (15-2) will play their last regular season game at Texas A&M on March 4 at noon. The game will be televised on CBS.