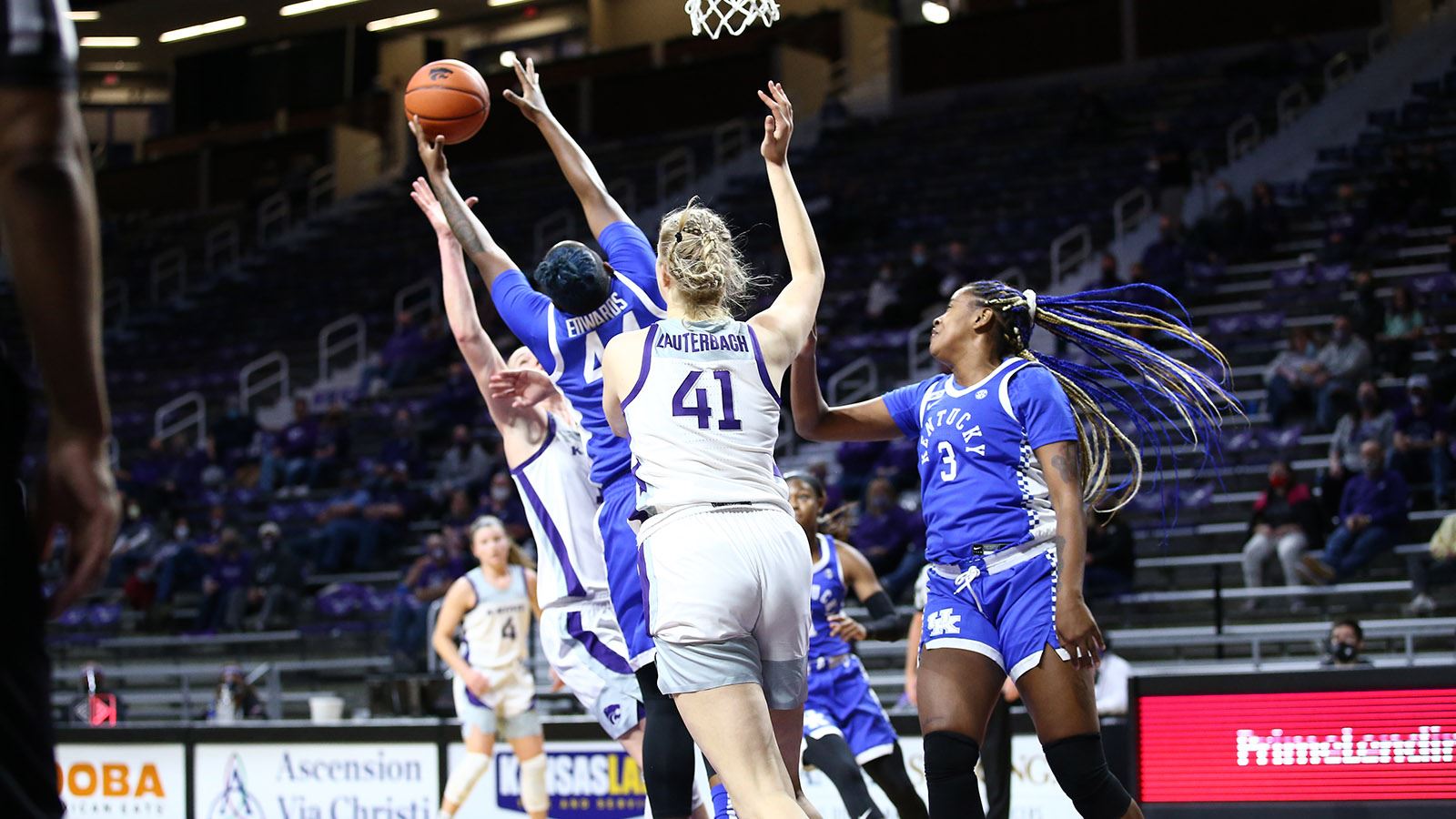 Dre’una Edwards had her second straight double-double, scoring 16 points and grabbing 12 rebounds as No. 11 Kentucky rallied late to win 60-49 at Kansas State on Thursday night.

Chasity Patterson and Robyn Benton each had 11 points for the Cats, who hit only 23 of 62 (37.1 percent) from the floor in the game. Kentucky forced 18 turnovers and turned those into 18 points. UK also outrebounded KSU, a much taller team, 40-32.

Kentucky (3-0) got off to a quick start, with three-pointers from Blair Green and Patterson inside the first two minutes as the Cats took a 6-0 lead. After a pair of KSU free throws, Edwards scored to make it 8-2 Cats.

Kansas State did not hit its first field goal until 5:22 remained in the first period when Laura Macke hit a three-pointer to make it 8-5. Howard got her first points of the season on a pair of free throws that made it 10-5 Cats. Benton then hit a layup to give UK a 12-5 advantage. However, KSU would close the period on an 11-2 run to lead 16-14 after 10 minutes of play.

In the second period, Kentucky got a three from Benton to take a 17-16 lead. But Kansas State answered with six in a row, on a pair of threes, to lead 22-17. The Cats then got a layup from Patterson and a free throw from Benton to cut the lead to 22-20 with 5:13 to play in the half.

After another three from KSU, Kentucky got another Patterson layup, then a three from Edwards to tie the game at 25 apiece. But KSU got a Macke layup with 1:14 to go in the half, and Kansas State took a 27-25 lead into the break.

Early in the second half, Edwards rebounded her own miss and put it in to tie the game at 27 each. After KSU scored three straight, KeKe McKinney hit a jumper to get the Cats within one, 30-29. The Cats then took the lead when Patterson drove to the basket and hit a layup to make it 31-30.

After KSU got a three from Christianna Carr, Howard hit a jumper to tie the game at 39-39 with 2:22 left in the period. The Cats took the lead 42-39 on a Benton three-pointer with 1:55 left in the third. Rachel Ranke would score for KSU with 32 seconds left in the third, but McKinney hit one of two at the line with four seconds left to give the Cats a 43-41 lead after three periods.

In the final period, KSU took the lead back on a three by Ranke but Kentucky answered back again on a layup by Olivia Owens. Kentucky then stretched the lead to 49-44 on a pair of Green free throws and Edwards layup. But KSU fought back, getting a three from Carr to cut the lead to 49-47 with 5:35 to play.

Kentucky returns to action on Sunday, hosting Indiana at Memorial Coliseum. Tipoff is set for 4 p.m. and the game can be seen on ESPNU.