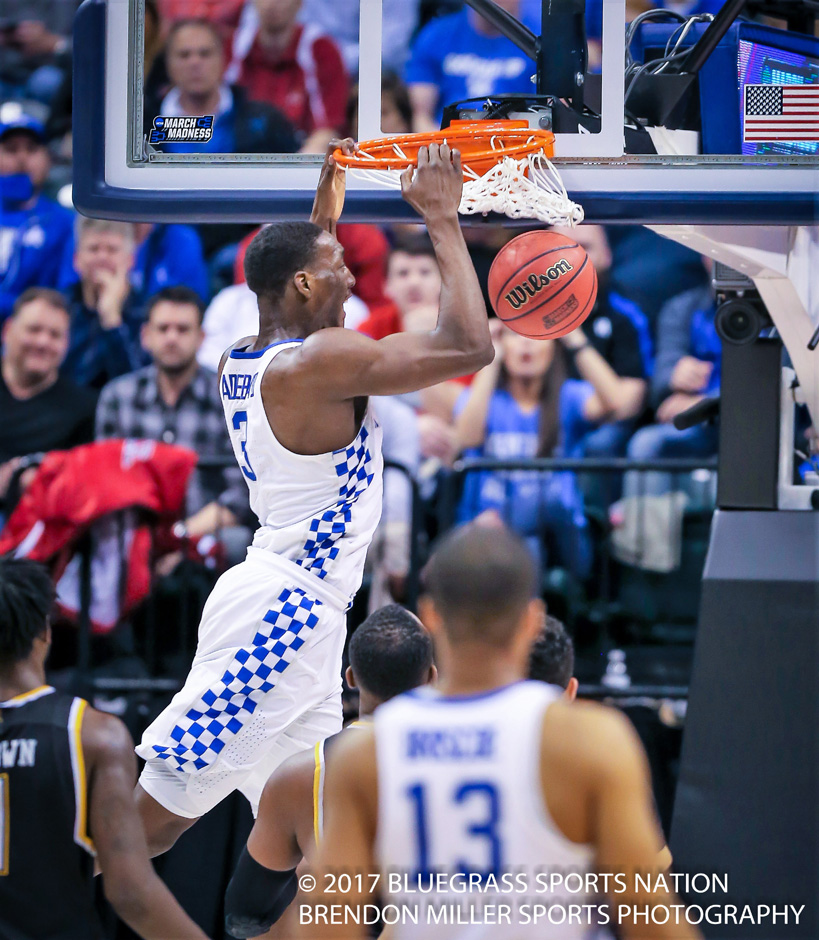 Indianapolis – The NCAA Basketball Committee may do a lousy job sometimes with picking the brackets and the teams that make up the field of 68 teams.  But one thing you can say for sure about them and CBS Sports is they go out of their way to set up made for TV storylines.

Today’s match-up between the University of Kentucky Wildcats and the Wichita State Shockers is a perfect example.  You may remember in 2014 that an under seeded Kentucky team (8th seed), and a team that had spoken openly about wanting to go undefeated that season, took on a Wichita State team, that had actually ran through their regular season with an undefeated 34-0 record.  Coincidence?  I don’t think so.  All that had to happen was for both teams to win their opening round games.  Of course they did and Kentucky was able to defeat Wichita State 78-76 that year, in a wonderfully played NCAA tournament game.  That win helped propel that young Kentucky team to a magical run to the Final Four and the National Championship game.

Déjà vu!  This time it is Wichita State that was under seeded (10th seed with a now 31-4 record) and Kentucky which is the favorite.  Again both teams had to win their opening round game, which happened when Kentucky downed Northern Kentucky 79-70 and Wichita State upended Dayton 64-58 here at Bankers Life Fieldhouse in Indianapolis, Indiana on Friday.  That has set up the rematch of the two teams.  Coincidence?  Again I don’t think so, CBS and the NCAA Committee are looking to bring in the best TV ratings possible, so they are always trying to help create and force certain story lines.  Wichita State was not under seeded by mistake.

The Kentucky-Wichita State game was the second of the day at Bankers Life Fieldhouse.  The University of Louisville went down to defeat at the hands of the Michigan Wolverines 73-69 in the first game.

Kentucky started their game tentative, as did Wichita State, they both went the first two minutes of the game without a score.  Finally Wichita’s Zach Brown made a free-throw to break the ice at 1-0.  The offensive struggle continued and the score was tied at six apiece when UK senior guard Dominique Hawkins made a little floater in the lane.  The scoring finally picked up and the Wildcats gained the lead at 14-8, when fellow senior guard Mychal Mulder hit a three-pointer at the ten minute mark.

Once again both teams went ice cold.  Another three minute dry spell was ended when the Shockers’ center Shaquille Morris made a basket to make it 18-17 Wichita.

The Wildcats just couldn’t find the range, but finally Kentucky freshman Malik Monk made five points (a three-pointer and two FT’s) at the end of the half to give the Wildcats a 26-24 halftime lead.

Second half started off with a different story.  Both teams came out firing and when Wichita’s Zach Brown made a layup, the Shockers had their biggest lead at 37-33.

Kentucky then went on a seven point run and when Malik Monk lobbed a pass for a slam dunk by Bam Adebayo the Wildcats had a 40-37 lead with thirteen minutes to go in the game.

The game remained tight as the teams traded baskets back and forth and when Adebayo put back a rebound basket the Wildcats were up 50-44 at the 7:39 mark.

The Cats’ had their biggest lead of the game, when DeAaron Fox made a steal and dunk to give Kentucky a 58-51 lead with 4:01 remaining in the contest.

Then Malik Monk made the play of the game.  With the Wildcats clinging to a one point lead at 63-62,  Monk blocked a shot by the Shocker’s Markis McDuffie and then Monk was fouled after retrieving the ball.  Two free throws by Monk gave the Wildcats a 65-62 advantage, but ten seconds still remained in the game.  Wichita brought the ball up court and Landry Shampet who led the Shocker’s in scoring went up for a game tying three-point attempt, but that shot was blocked by the Wildcats Bam Adebayo as time ran out.  Game over……..Wildcats win.

Kentucky was led in scoring by Fox and Monk, who each had 14 points.  Bam Adebayo added 13 points and also had a team high 10 rebounds, his eighth double-double of the season.

Coach John Calipari said after the game about his young team.  “These guys, they’re young, but they have a will to win and play with courage.  So proud of them.”

It was an extremely hard fought game, but the Wildcats now advance to the sweet sixteen of the NCAA tournament and will play in Memphis, Tennessee on Friday, March 24th.  Kentucky is currently riding a 13-game winning streak.