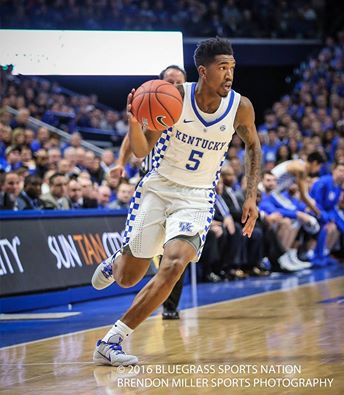 For 41 seconds, Texas A&M was excited and confident. UK missed their first shot and the Aggies came down the court and drained a trey, just 41 seconds in. Then they got the full thrust of the young Cats scoring ability as UK would tear off 15 unanswered points for a 15-3 lead.  Before all was said and done, UK led 50-27 at the break behind 13 points by Malik Monk.

The second half, oddly enough, started just like the first half as Texas A&M hit a three to make it 50-30. Kentucky would then run off 10 unanswered for a 60-30 lead. After that is was more of the Malik Monk show as he scored 13 more to finish with a game high 26 points.

Monk was followed in scoring by Fox 15 points, 5 rebounds and 6 assists. Briscoe dropped in 13 points, and 7 Assists. Adebayo tallied 10 points, 3 blocks, and 3 rebounds. Also hitting the score sheet were Humphries with 8, Hawkins with 6. Gabriel, David, Mulder & Willis with 5 apiece. Killeya-Jones rounded out the scoring with 2 points.

Kentucky will now face a tough Arkansas team Saturday at home in an 8:30pm tilt.