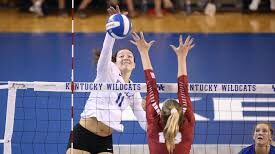 LEXINGTON, Ky. – For the second year running, the Kentucky Volleyball team has been tabbed a preseason top-10 team, slotting in at No. 7 in the American Volleyball Coaches’ Association preseason top-25 released on Tuesday afternoon.

Kentucky is one of three teams from the Southeastern Conference that are ranked in the initial poll, joining Florida (10) and Tennessee (19). Both Mizzou and South Carolina received votes.

UK is scheduled to play six games this season against teams that are in the preseason poll including two against No. 10 Florida, and once vs. No. 14 USC, No. 17 Purdue, No. 19 Tennessee and No. 25 Louisville.

There are six other matches that the Wildcats will play this season in addition to the six against ranked teams. Those matches feature UK facing Mizzou and South Carolina twice, Utah and Northern Iowa.

The SEC joins the Big 10 as the only two leagues to have multiple teams ranked inside the top-10.