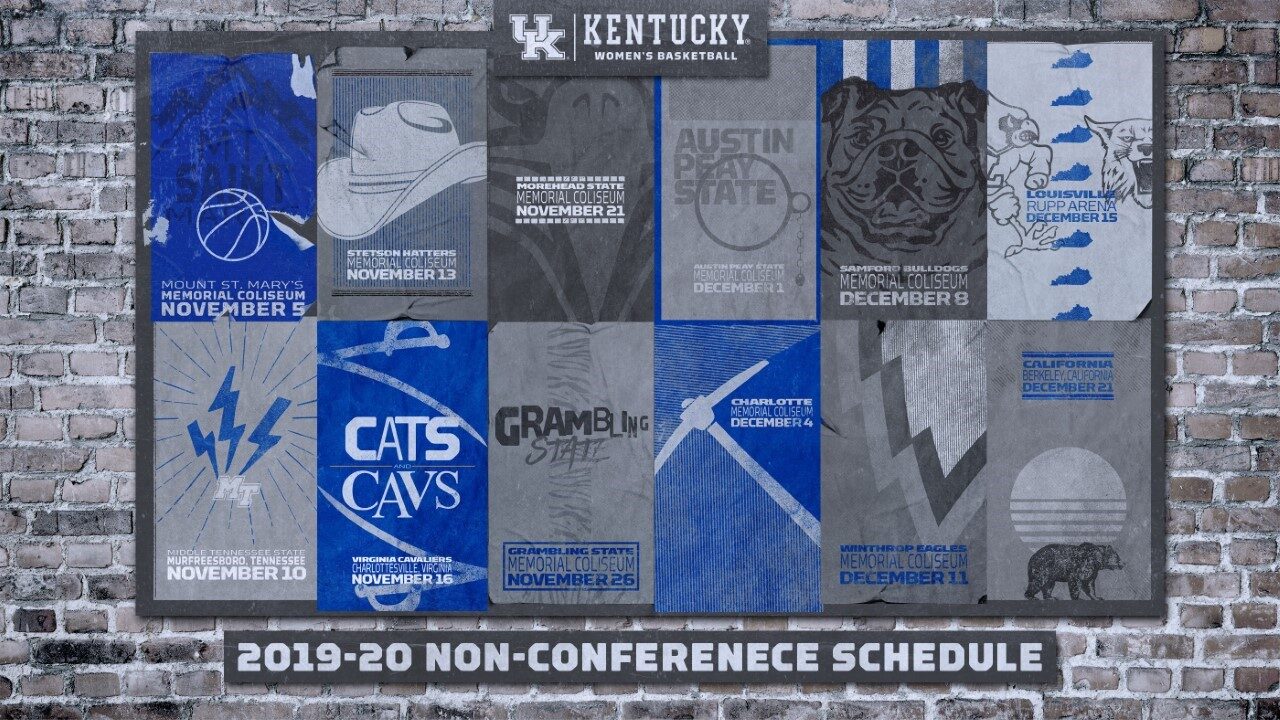 2019-20 season tickets are on sale now for just $69 online at UKathletics.com/tickets

LEXINGTON, Ky. –  (UK Athletics release) It’s going to be another exciting year in Memorial Coliseum as the Kentucky women’s basketball team is set to host 10 non-conference home games in 2019-20. Matthew Mitchell and Co. announced their 2019-20 non-conference schedule Tuesday, featuring several new opponents and a familiar foe in Louisville, who will make the short trip to Lexington for the annual rivalry game in mid-December.

Big Blue Nation can get its first look at the Wildcats on Oct. 30 as UK plays host to Southern Indiana for its lone exhibition game of the season. The following week, Kentucky officially gets the 2019-20 season started with its season opener vs. Mount St. Mary’s on Nov. 5 inside Memorial Coliseum. After great success on the road last season, UK will be tested away from Lexington early this year with two of its first four games on the road starting Nov. 10 at Middle Tennessee. After returning home to play Stetson on Nov. 13, the Wildcats will return its home-and-home series with Virginia on Nov. 16 at John Paul Jones Arena.

As November comes to a close the Wildcats will open a seven-game home stretch starting Nov. 21 vs. Morehead State and Nov. 26 vs. Grambling State. Kentucky will be home a majority of December, kicking off the month with a Dec. 1 showdown with Austin Peay. Charlotte will make its first trip to Lexington on Dec. 4, followed by Samford on Dec. 8 and Winthrop on Dec. 11.

UK will conclude its non-conference schedule with back-to-back games against teams that made the 2019 NCAA Tournament, hosting Louisville at Rupp Arena on Dec. 15 before traveling to Cal on Dec. 21. The game vs. UofL will mark just the fifth time the two programs have played at historic Rupp Arena with the record knotted 2-2. Kentucky’s trip to Cal is a return of a home-and-home series after the Wildcats hosted the Golden Bears in 2017.

Game times and TV assignments are still to be determined. UK’s 16-game Southeastern Conference slate will be announced later, however, the conference office has announced the Wildcats’ opponents. Kentucky will face Alabama, Florida and South Carolina both home and away, while Auburn, Georgia, Mississippi State, Tennessee and Texas A&M will travel to Lexington. UK’s road league games will be at Arkansas, LSU, Missouri, Ole Miss and Vanderbilt.

·         Savings over the cost of buying single-game tickets

·         Opportunity to renew and upgrade your seat location each season, based on availability

The Wildcats are looking to keep their winning ways going this season after a strong 2018-19 campaign that saw 25 wins and a trip to the NCAA Tournament. UK started the year with wins over South Florida, North Carolina and UCLA en route to the 2019 Paradise Jam Island Division championship before winning 11 league games to finish fourth in the always tough SEC.

UK will also add incoming true freshmen Emma King (Stanford, Ky.) and Deasia Merrill (Villa Rica, Ga.) along with transfers Sabrina Haines, Nae Nae Cole and Chasity Patterson. Dre Edwards, a transfer from Utah who was the 2019 Pac-12 Freshman of the Year, joined the Wildcats this spring but will have to sit out the 2019-20 season due to NCAA transfer rules.

A Few Notes About the 2019-20 Non-Conference Schedule:

–          Kentucky will be facing Mount St. Mary’s for the first time in program history.

–          Kentucky and Virginia played for the first time in program history last season in Rupp Arena with UK earning a 63-51 victory. With that said, it will obviously be Kentucky’s first trip to Charlottesville to play this November.

–          Matthew Mitchell, who coaches two seasons at Morehead State before being named UK’s head coach, will face his former employer 10th time this season. Mitchell is 9-0 vs. the Eagles.

–          Kentucky’s trip to California will mark the fifth straight season UK has faced a Pac-12 team in non-conference play. The Wildcats are 4-3 in that stretch and have played five different teams (Arizona State, Cal, Colorado, UCLA and Washington State).